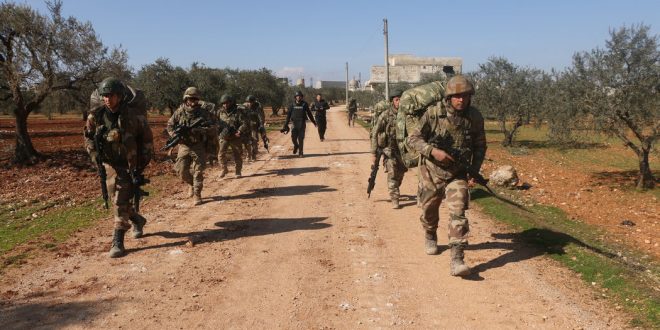 Turkey Vows to Resist Attacks Against Its Forces in Syria

Europe|Turkey Vows to Resist Attacks Against Its Forces in Syria

ISTANBUL — Turkey vowed on Friday to resist further aggression against its troops in northwestern Syria, a day after Russian or Syrian air and artillery strikes killed 33 Turkish soldiers, bringing Russia and Turkey close to open conflict.

NATO ambassadors met on Friday in an emergency session called by Turkey, a member state. European officials called for calm, as President Recep Tayyip Erdogan of Turkey and Russian President Vladimir V. Putin spoke to each other in an effort to calm tensions. According to the Russian side, they agreed to hold a summit meeting in the near future.

But emotions were still running high in Turkey on Friday. “We will not leave the blood of our brave soldiers on the ground,” Fahrettin Altun, the director of communications in the Turkish presidency, wrote in a thread of comments posted on Twitter. “The international community must act to protect civilians and impose a no-fly zone.”

Russia denied any role in the attacks, saying on Friday that none of its jets were operating in the area when they occurred. “Aircraft of the Russian Air Force did not engage in combat in the Behun vicinity,” the Defense Ministry said in a statement.

Turkey has blamed the strikes on the Syrian government. But it has also indirectly blamed Russia, saying it knew of the presence of Turkish troops and did nothing to stop the attack even after being alerted. Russia has been conducting a ferocious campaign of aerial bombardment in the province of Idlib in support of the Syrian offensive to seize control of the last rebel-held region.

Turkey’s defense minister, Hulusi Akar, said the attack was carried out even though the Turkish troops had coordinated their location with Russian forces on the ground. He added that there were no other armed groups near the Turkish units at the time of the attack, as Russian officials have suggested.

“Following the first strike, although another warning was made, the attack continued; during those airstrikes even ambulances were hit,” he said in comments to the Anadolu news agency in the Turkish border city of Hatay.

Turkish planes, artillery and drones had retaliated after the attack, pounding the Syrian government positions responsible, he said. “Our operations will continue until the bloody hands laid on our soldiers are broken,” he said.

Moscow also denied that Turkey had shared coordinates of its troops with Russian forces, saying they tried to stop the attacks as soon as they were told about them.

While there was no way to resolve the conflicting accounts, Russia is known to practice hybrid warfare, of which lies and deception are an integral part. In Crimea, for instance, it took nearly a year before Mr. Putin admitted that the “green men” who invaded the territory were in fact Russian soldiers without insignia.

Turkey was not able to evacuate the casualties by air, because Russia controls the airspace in northwestern Syria. As a result, rescue workers and civilians were forced to transport the dead and wounded to the Turkish border in trucks.

Mr. Altun called on Russia and Iran to abide by the agreement reached in Astana, the capital of Kazakhstan, two years ago for de-escalation in the region, and he repeated an appeal from Turkish officials for NATO to honor its responsibilities toward a fellow member.

“We have been targeting all regime positions from the ground and the air,” he posted on Twitter. “We call on the parties of the Astana Process and the broader international community to honor their responsibilities. A repeat of past genocides such as those in Rwanda and Bosnia cannot be allowed in Idlib.”

Turkish officials have warned that if the pressure in Idlib is not resolved, Turkey will not be able to stem a tide of Syrian refugees forging across borders into Europe. Jens Stoltenberg, the NATO secretary general, said that the alliance would meet under Article 4 of its treaty, which allows any member to request talks when it believes its “territorial integrity, political independence or security” is threatened.

The talks do not commit the 29-nation alliance to any particular action or response. The article is different from Article 5, which is about mutual self-defense and refers to an attack on the territory of any member. The attack in question did not take place on Turkish soil.

The Russian Defense Ministry rejected Turkey’s assertion that it had alerted Russian forces before the strikes. “Immediately after obtaining information about injured Turkish servicemen, the Russian side took comprehensive measures to completely stop shelling by the Syrian military,” the statement said.

Sergei V. Lavrov, the Russian foreign minister, said at a news briefing following talks with Foreign Minister Jean Asselborn of Luxembourg on Friday that Russia’s presence in Syria was justified. “We insist that there should be no compromises with terrorists, who have been rearing their head after the so-called Arab Spring broke out in 2011,” he said.

The European Union’s top diplomat warned that the situation in Idlib could slide into an international confrontation.

“Ongoing escalation around needs to stop urgently,” said the E.U. high representative for foreign affairs, Josep Borrell, on Twitter. “There is a risk of sliding into a major open international military confrontation.”

He added that the bloc would “consider all necessary measures to protect its security interests. We are in touch with all relevant actors.”

Russia said earlier on Friday it was sending two warships armed with cruise missiles to waters off the Syrian coast.