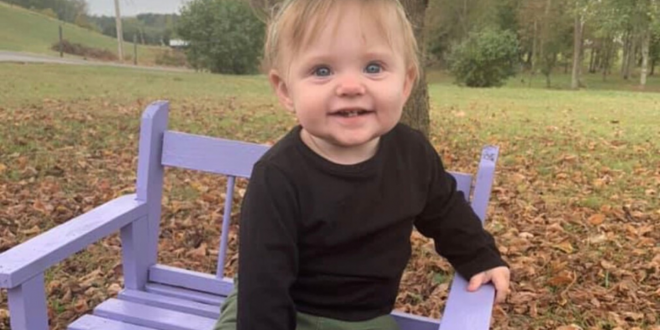 Evelyn Mae Boswell was reportedly last seen on December 26, 2019, the agency said. She was reported as a missing child on February 18.

Two fugitives have been arrested in North Carolina in  the disappearance of Tennessee toddler Evelyn Boswell.

William McCloud, 33, and Angela Boswell, 42, were arrested on Tennessee warrants and will be prepared for extradition, said Lt. Logan Kerr, a spokesman for the Wilkes County, North Carolina, Sheriff’s Department.

McCloud and Boswell were located in a gray BMW that has been sought by investigators in the Evelyn Boswell case.

Evelyn Boswell: Why did it take months to issue an Amber Alert for missing Tennessee toddle?

In a news release Saturday, the Wilkes County Sheriff’s Office said that the BMW had been reported stolen, and McCloud and Boswell were located in the vehicle on Friday evening. Both suspects were arrested and charged with possession of stolen property and are being held without bond on fugitive warrants, the news release says. Their first court date is Monday.

The fugitive warrant for Angela Boswell also says that she has “broken the terms of her bail, probation and parole,” although no details are provided.

Evelyn, a blonde-haired and blue-eyed girl who is 15 months old, has been described as about 2 feet tall and weighing 28 pounds. She was last seen wearing a pink tracksuit, pink shoes and a pink bow.

Evelyn vanished in a confounding case that authorities have said is rife with conflicting and inaccurate information. The TBI issued an Amber Alert for the girl on Wednesday night at the request of the Sullivan County, Tennessee, Sheriff’s Office.

The TBI initially said Evelyn hadn’t been seen since Dec. 26, but officials said Friday that it was more likely she was last seen by a babysitter on Dec. 10 or 11.  She wasn’t reported missing until Feb. 18, according to law enforcement officials.

“This is unlike anything I have ever seen,” Sullivan County Sheriff Jeff Cassidy said.

Evelyn’s mother, Megan “Maggie” Boswell, has full custody of the child. Her father, Ethan Perry, is in the military, stationed in Louisiana. Both the child’s mother and father, who are not married, have been involved in the investigation, Cassidy said.

Cassidy offered a $1,000 reward to anyone who came forward with information that leads to the child’s safe return. He asked others to contribute, too, “to bring sweet Evelyn home.”

Previous Don’t buy China’s story: The coronavirus may have leaked from a lab
Next (Subtitled) BTS Talk Identity Crisis, New Album ‘Map of the Soul: 7’