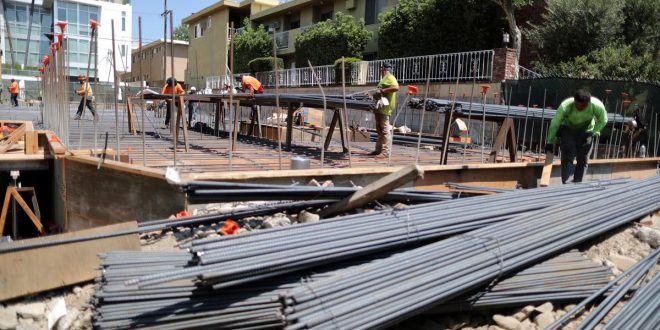 WASHINGTON (Reuters) – U.S. homebuilding increased less than expected in May, but a strong rebound in permits for future home construction suggested the housing market was starting to emerge from the COVID-19 crisis along with the broader economy.

Other data on Wednesday showed applications for loans to buy a home surged to a near 11-1/2-year high last week. The reports followed on the heels of data on Tuesday showing a record surge in retail sales in May. Employers hired a historic 2.5 million workers last month. Activity, however, remains well below pre-COVID-19 levels and economists warn it could take even a decade for the economy to fully recover from the global pandemic.

“Housing is a leading economic indicator and it is pointing the way forward but there is a limit to growth when the economy has to drag along the millions and millions of unemployed workers displaced in this pandemic recession who won’t be seeing paychecks anytime soon,” said Chris Rupkey, chief economist at MUFG in New York.

Single-family homebuilding, which accounts for the largest share of the housing market, edged up 0.1% to a rate of 675,000 units in May. Starts for the volatile multi-family housing segment jumped 15.0% to a pace of 299,000 units.

Homebuilding fell in the Midwest and the populous South. It rose in the West and Northeast.

Stocks on Wall Street were trading higher, extending a three-day rally. The dollar firmed against a basket of currencies. U.S. Treasury prices rose.

Permits for future home construction rebounded 14.4% to a rate of 1.220 million units in May, reinforcing economists’ expectations that the housing market will lead the economy from the recession that started in February, driven by historically low mortgage rates.

Though the housing market accounts for about 3.3% of gross domestic product, it has a larger footprint on the economy. A separate report from the Mortgage Bankers Association on Wednesday showed applications for loans to buy a home increased 4% last week to their highest level since January 2009.

Mortgage applications have climbed back above pre-COVID-19 levels.

Signs of recovery in the housing market were underscored by a survey of Tuesday showing single-family homebuilders very upbeat in June about conditions in the industry. Builders reported increased demand for single-family homes in lower density neighborhoods.

But with nearly 20 million unemployed and a resurgence of COVID-19 infections in some parts of the country, the housing market is not out of the woods yet.

Previous Inflation rate fell to -0.4% in May as COVID-19 continued to wallop Canada’s economy | CBC News
Next As layoffs slow and churn improves, is startup health improving?