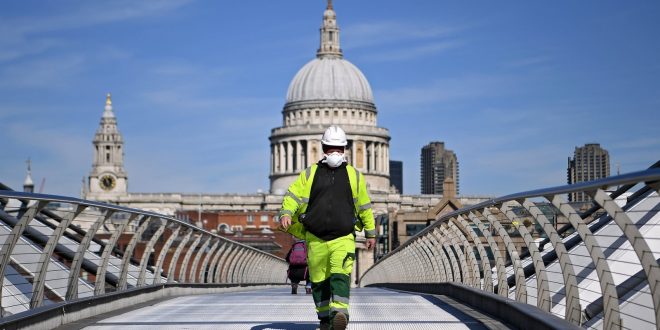 Britain now has Europe’s second-highest official death toll from the coronavirus pandemic, according to new figures that cover fatalities in all settings, including in nursing homes.

Public Health England has said that some 26,097 people died after testing positive for the virus.

A Downing Street spokesman said: “The Prime Minister spoke to Sir Keir Starmer on the phone this afternoon and updated him on the government’s efforts to combat coronavirus.

“It was a constructive call and they agreed to continue speaking about the national effort to defeat the virus,” the spokesman said.

He asked the government to explain how long it will take to fix the issue, as he also warned the UK looks on course for one of the worst Covid-19 death rates in Europe.

There are currently over 21,600 confirmed coronaivrus-related deaths in the UK.

Foreign Secretary Dominic Raab acknowledged there are “challenges on the front line” but insisted there is a global supply shortage on PPE and the government is doing “absolutely everything we can” to improve the situation.

He was deputising for Mr Johnson after the Prime Minister’s fiancée Carrie Symonds gave birth to a baby boy.

Mr Starmer began by asking why deaths in care homes are still rising – to which the First Secretary of State replied by stating it is a “challenge that we must grip and can grip”.

Sir Keir went on: “Six weeks ago on March 17, the Government’s chief scientific adviser (Sir Patrick Vallance) indicated the Government hoped to keep the overall number of deaths from coronavirus to below 20,000.

“He said that would be ‘good’ by which in fairness to him he meant successful in the circumstances. But we’re clearly way above that number and we’re only partway through this crisis and we’re possibly on track to have one of the worst death rates in Europe.

“On Monday, the Prime Minister said in his short speech that many were looking at our apparent success in the UK. But does the First Secretary agree with me that far from success these latest figures are truly dreadful?”

Mr Raab replied: “This is an unprecedented pandemic, a global pandemic, and I think in fairness we shouldn’t criticise either the CMO (chief medical officer) or the deputy CMO for trying to give some forecast in response to the questions that many in this chamber and many in the media are calling for.”

Turning to PPE, Mr Starmer said: “I recognise the challenge the government faces on this, I recognise that getting the right piece of equipment to the right place every time is very difficult, but lives do depend on it.

“And it is ten weeks since the Health Secretary declared that there was a serious and imminent threat to life. You’d hope that by now, things would be getting better, not worse.”

Mr Starmer added: “So can I ask the First Secretary, what is going on and how soon can it be fixed?”

Mr Raab replied: “I feel animated, inspired to do even better, but he needs to recognise on PPE that there is a global supply shortage and we’re doing absolutely everything we can to make sure that those on the front line get the equipment that they need.”

Mr Starmer went on to encourage the government to publish details about what happens in the next phase and on the exit strategy, with Mr Raab saying he could not offer a time frame.

The Labour leader said: “France, Germany, Spain, Belgium, New Zealand, Australia, Scotland and Wales have all published exit plans of one sort or another.

“(Mr Raab) said, ‘well what are the proposals, what should they cover?’. If you look at those plans, as he’s done and I’ve done, it’s clear that there are common issues such as schools reopening, business sectors reopening.

“These are the issues that, if he wants me to put them on the table, I absolutely will.”

He added: “Delay risks not only falling behind other countries, but also the successful four-nation approach so far.”

Mr Raab responded: “The Scottish Government has not set out an exit strategy. I read through very carefully their 25-page document, it was eminently sensible and it was grounded in the five tests that I set out on April 16.”

On testing, Mr Raab also said the Prime Minister’s 250,000 tests a day target remains “an aspiration” but would not put a date on it.