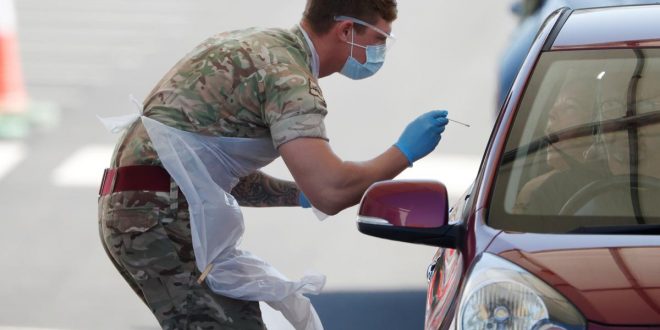 UK to test prevalence of COVID-19 in general population

LONDON (Reuters) – Britain’s government plans to test a sample of 20,000 English households for COVID-19 in the coming weeks to try to establish how far the disease has spread across the country.

Health minister Matt Hancock – who has faced criticism over limited testing facilities for some health and social care workers – said on Thursday the research would help the government understand the trajectory of the disease better.

More than 18,000 British people have died in hospital of the disease so far, and the country is now in its fifth week of a lockdown that stops most people from leaving home other than to buy food, exercise, or undertake essential work.

Britain’s health ministry said initial results from the research – which it is conducting jointly with the Office for National Statistics and the University of Oxford – would be available in early May.

Twenty thousand households from across England will take part in the pilot, which will be expanded to 300,000 households throughout the United Kingdom over the next 12 months.

Participants will provide weekly samples from self-administered nose and throat swabs for the first five weeks, which will show if they currently have the virus, and then monthly samples for the following year.

Adults from around 1,000 households will also provide blood samples to see if they have developed antibodies following an earlier infection with the coronavirus.

“Understanding more about the rate of COVID-19 infection in the general population, and the longer-term prevalence of antibodies, is a vital part of our ongoing response to this virus,” Hancock said.

Tests will be administered by IQVIA, a U.S. health data company that has worked before with Britain’s state-run health service, and analysed in British government laboratories.

The government’s chief medical adviser, Chris Whitty, said at a news conference on Wednesday that Britain did not yet have any reliable antibody tests, though he hoped they would be available in the near future.

Whitty said it would not be possible to end all lockdown restrictions until a vaccine or effective treatment for COVID-19 was developed and rolled out, something that could easily take until the end of the year.