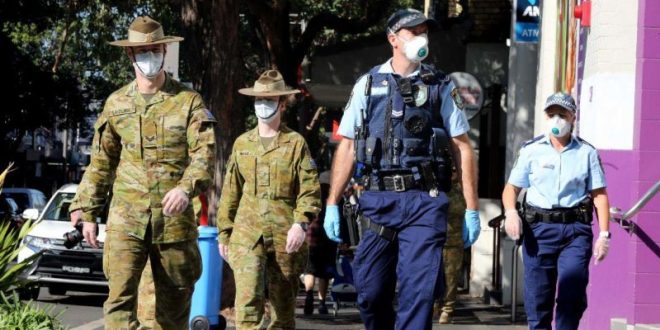 A spokesman for Prime Minister Scott Morrison said the federal health and defence departments were working with Emergency Management Australia “to expedite a request for assistance from Victoria” and that his government stood “ready to assist.”

“The Prime Minister has been in regular discussions with Premier Andrews and the Minister for Defence about the possible further deployment of Commonwealth resources, including the ADF and their expertise, to assist Victoria to manage the spread of COVID-19,” the spokesman said.

“ADF personnel are already on the ground working with Victoria on planning support.”

Hotel detainees and workers are believed to make up as many as half of the 141 active COVID-19 cases in Victoria, including 30 returned travellers who have tested positive.

The state’s chief health officer Brett Sutton said on Wednesday that contact tracers believed the family cluster in the south-east Melbourne suburb of Hallam originated with a contractor working at the Stamford Plaza quarantine hotel, who brought the virus home.

He said hygiene protocols and distancing while taking detained travellers outside for fresh air must also be observed by hotel security guards.

“Clearly there’s been transmission to those contracted staff … Whether that’s been from
a surface or whether it’s been from a guest to a contracted staff member through respiratory droplets, it will be impossible to find out. But we’re reviewing all of those processes.”

There are already 28 Australian Defence Force personnel assisting with the pandemic response in Victoria, including 12 who are involved in planning support, the department said in a statement on Wednesday.

Federal Health Minister Greg Hunt told reporters in Melbourne on Wednesday morning there was “no blame” to be laid in the Victorian outbreak and that all states and territories were working with the federal government on a united response.

Asked if he was confident in the private security company contracted to run Victoria’s quarantine hotels, he said all states were reviewing standards in hotel quarantine.

“This will become an increasingly important part of our defence mechanisms,” Mr Hunt said.

“We know there was a breach within the Victorian context … It is a fact, so what we have to do is ensure that those standards in hotel quarantine are absolutely at the highest level.

“So we have offered support, and it is entirely a matter for each state and territory to determine their particular needs at that particular time.”

“They have been described as the SAS of infection control,” the minister said.

“Victoria is a great state, they have done an extraordinary job, so far, overwhelmingly an extraordinary job … We work as one single country, and when somebody needs the help, we are here to help and they will accept and ask for what it is that they need.”

A state government spokesman said this support “will mean we can get even more tests done and results back quickly – and a stronger effort to remind Victorians if you are sick, stay home and get tested”.

“We thank our neighbouring states for agreeing to provide this support – which will ensure we keep Victorians safe,” the spokesman said.

Previous Coronavirus pandemic: Updates from around the world
Next Covid-19 has had ‘severe impact’ on readers’ personal finance, News24/Ipsos poll finds | News24