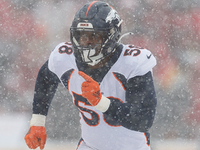 Miller is expected to speak publicly Friday and the Broncos are aware of the situation, Rapoport added.

The news comes a day removed from Rams offensive lineman Brian Allen becoming the first known NFL player to have tested positive for the new coronavirus.

One of the NFL’s most well-known talents and recognizable faces, 31-year-old Miller is an eight-time Pro Bowl selection with three All-Pro credits and 106 sacks in his decorated nine-year career.

Saints coach Sean Payton announced last month that he had tested positive for the coronavirus before a follow-up announcement that he had recovered. The pandemic has also resulted in the NFL having closed all its team facilities and moved to a virtual 2020 NFL Draft from April 23-25.

The hulking Miller, a 6-foot-3, 250-pound standout off the edge known for his fearsome play, trademark glasses and seemingly ever-present smile off the field, has now become one of the most notable athletes in the sports world to have tested positive.