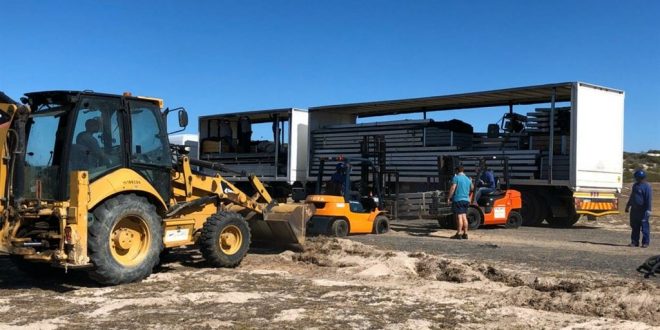 The urgent construction of a massive Covid-19 temporary shelter is under way to house more than 2 000 homeless people in Cape Town.

It is a race against time because winter rains are due to hit the Western Cape on Sunday.

City of Cape Town mayoral committee member for community and health services, Zahid Badroodien, told News24 the new facility is situated in Strandfontein, on the south of the Cape Flats, on several large existing sports fields.

The site will be ready to take in its first homeless residents on Sunday afternoon.

Civil engineering infrastructure, including water and electricity supply, is being laid into the ground, while six large marquee tents are being erected.

Badroodien said the South African Human Rights Commissioner, Chris Nissen, and his team, have also given important input to ensure “all efforts are sensitive and respect human dignity at this time”.

“Initially, the City’s process, in terms of accommodating the homeless, in terms of the Disaster Management Act, was to identify seven large facilities across the city – from Paint City in Belville, to an old school facility in Somerset West, to a number of other parcels of land in the Retreat, Wynberg and Claremont area, adjacent to The Haven night-shelters, with the expectation to increase the number of beds available to our homeless community for shelter, in a more long-term solution.

“The preparation of these seven facilities would have seen the injection of about 2 000 temporary new beds into the shelter space, which the City has not yet been able to increase in the past two or so years. Here was an opportunity for the City to do exactly what it had been planning to do,” Badroodien said.

This was led by the Homeless Agency Committee.

But the City had now learnt – especially from its “Safe Space” in Culemborg on the Foreshore – that running multiple, disparate sites across the city was not an effective use of management resources.

“A lot of resources will be required to ensure the effective management of these locations, and seven small facilities across the city was not ideal, in terms of stretching a very limited capacity,” Badroodien explained.

This was because the people expected to be housed had a range of needs, including those affected by substance abuse, or withdrawal, the elderly, disabled and people with mental impairments.

“The way individuals are grouped [at the new facility] is very important… the intention is to erect about eight different tents,” he said.

This would include different areas for men, women and couples; those who required isolation or medical attention; as well as substance abusers, who should ideally have gone to a rehabilitation facility but could not under the current emergency circumstances.

The City will be working with service providers who already run other shelter services, to offer the homeless people two meals per day, as well as a range of other support services.

The new facility is in Strandfontein, on the south of the Cape Flats, on several large sports fields.

Civil engineering infrastructure, including water and electricity supply, is being laid into the ground, while six large marquee tents are being erected. @News24 @TeamNews24 pic.twitter.com/Et4plhoN7T

Badroodien said he was well aware that residents of Strandfontein had expressed “frustrations” around the imminent arrival of the 2 000-strong group of homeless people.

The City had looked at all “viable options” before deciding on the Strandfontein sports complex site.

The security effort around the site would be “immense”, he promised. Strict security measures were being put in place, including perimeter fencing and law enforcement patrols. This was to protect both the residents and surrounding communities.

He said he hoped the people of Strandfontein would understand the situation. The urgent construction of a massive Covid-19 temporary shelter is under way to house more than 2 000 homeless people in Cape Town. (Zahid Badroodien)