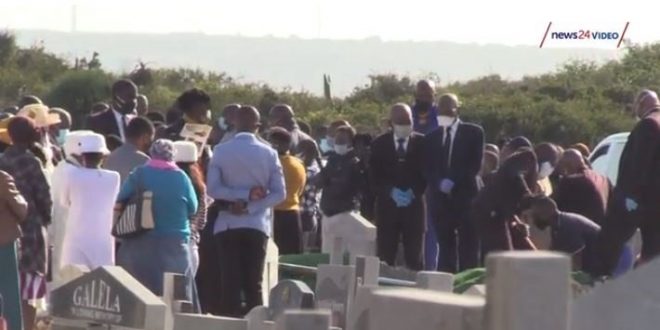 One of Port Elizabeth’s biggest funeral parlour services says the phone is constantly ringing as hospitals and families look for safe spaces to store the bodies of Covid-19 patients.

Speaking to News24 on Friday, the owner of Vantyi and Vantyi detailed how their jobs have become increasingly difficult with Covid-19 in South Africa.

Vuyo Vantyi, whose business services almost all of the Port Elizabeth townships, said as funeral parlour owners, they hoped the virus was not here to stay.

People aren’t able to bury their loved ones with dignity. They are only given an hour for the burial

“I don’t sleep. I’m always getting calls from hospitals about Covid-19 related deaths. I always have to be available to make sure that the bodies of people who were infected with Covid-19 are separated from people who died of natural causes.”

Vantyi said he’s also been approached by some private hospitals, such as Netcare Greenacres Hospital in the city, about his storage capacity, “because there are just so many deaths,” he told News24.

“People are affected every day in great numbers,” he told News24.

“They’ve appealed to me to store their bodies because they don’t have storage for people who have died. I’m arranging that with them now to store the bodies for them.”

Some undertakers were turning away families wanting to bury relatives who died of Covid-19, Vantyi said.

“Fortunately for me, I’ve made arrangements to store Covid-19-related bodies in separate fridges and those who have died of other causes in another storage area.”

This Saturday alone, Vantyi will be burying 30 people, according to a Herald report. This after conducting 10 burials on Friday and 25 on Thursday.

Netcare Greenacres Hospital’s hospital area general manager André Bothma, told News24 that they recently contacted all the funeral parlours in Port Elizabeth to find out what their capacity was as part of planning for the management of an increase in Covid-19 patients and related deaths.

Bothma said the hospital itself did not have its own mortuary, but had made plans for a free-standing facility.

“Our hospital did not have a mortuary, as we arrange with one of a number of private funeral parlours to collect deceased patients from our hospitals, in consultation with their families and based on their preference of funeral parlour.

“We have, as a precautionary measure, acquired a free-standing mortuary facility at Netcare Greenacres Hospital earlier this week, in case funeral parlours find themselves in a position where they cannot immediately accommodate deceased patients.”

Vantyi also said he would assist Life Mercantile Hospital. Life Healthcare regional manager Riaan Croucamp, however, said they have not encountered any storage difficulties yet, and that they have not communicated with Vantyi.

At Mercantile, the hospital also created a holding facility to create capacity, should the surge require it, Croucamp said.

‘It’s not easy turning people away’

Another undertaker operating in Motherwell said he was reluctant to take bodies of Covid-19 victims.

The undertaker, who did not want to be named for fear of losing more business, added that this was hurting his income.

We are smaller than other players. If we take business of Covid-19 patients, where do we store them? I don’t have enough storage space. I don’t have the capacity and I need to protect what I already have.

“I’ve lost business. I have to weigh out everything and to see what’s good for my employees and me. Some undertakers are making profit and burials are happening every day, but I really can’t afford it. It’s not easy turning people away. It’s just something I need to do,” he added.

The Eastern Cape has recorded the second most deaths by province. As of Friday, 371 people died of Covid-19 in the province.

Earlier this week, the dean of the Department of Health Sciences at Nelson Mandela University, Professor Lungile Pepeta, warned that the shortage of nurses and doctors ensured that a tsunami wave was on its way.

The Eastern Cape has fewer than 70 ICU beds, the professor said.

He told News24 that, in the Nelson Mandela Bay metro alone, cases were likely to double from the 4 706 cases recorded last weekend, to more than 9 000 within the next 10 days.

Health Minister Zweli Mkhize previously expressed his concern about the rising numbers in the Eastern Cape.

At the recent launch of a 3 000-bed facility at an old Volkswagen plant in the metro, he said the lockdown had prepared the country for a “devastating and decimating storm“.