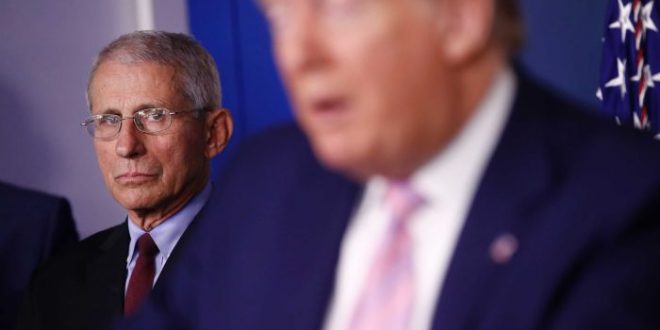 Top US health official Anthony Fauci will not testify to a congressional committee examining the Trump administration’s response to the coronavirus pandemic, the White House says, calling it “counterproductive” to have individuals involved in the response to testify.

The White House issued a statement on Friday (local time) after a spokesman for the House of Representatives committee holding the hearing said the panel had been informed by government officials that Dr Fauci had been blocked from testifying.

“While the Trump administration continues its whole-of-government response to COVID-19, including safely opening up America again and expediting vaccine development, it is counterproductive to have the very individuals involved in those efforts appearing at congressional hearings,” White House spokesman Judd Deere said in a statement.

Dr Fauci’s testimony was being sought for a May 6 hearing by a House Appropriations subcommittee that oversees health programs, spokesman Evan Hollander said.

The Washington Post first reported Dr Fauci would not testify.

Dr Fauci, director of the National Institute of Allergy and Infectious Diseases, has been one of the leading medical experts helping to guide the US response to the highly contagious virus that has swept across the United States and the rest of the world.

President Donald Trump has repeatedly clashed with the Democratic-controlled House over its moves to investigate his actions or those of his administration.

According to the Johns Hopkins University data, the US has more than 1 million confirmed cases of COVID-19 and nearly 65,000 people have died.

Democrats say Mr Trump has failed to develop a comprehensive and effective plan for testing Americans and tracing contacts of those who are infected by the virus that causes the sometimes-fatal COVID-19 respiratory disease.

Dr Fauci, 79, has had a respectful, but sometimes complicated, relationship with Mr Trump.

The well-regarded doctor has at times corrected or contradicted the President at White House briefings or in press interviews on issues such as the time required to develop a vaccine and the likelihood that the coronavirus will return in autumn.

Mr Trump has occasionally shown exasperation with Dr Fauci but ultimately has followed, largely, the advice he and Dr Deborah Birx, the White House’s coronavirus task force coordinator, have provided on responding to the pandemic.

Last month, the White House said Mr Trump was not firing Dr Fauci despite his retweet of a supporter’s #FireFauci message.

Aides to Dr Fauci were not immediately available to comment on the House committee’s desire to have him testify.

Previous WHO chief says COVID-19 emergency declaration was made in ‘enough time’ for world to respond
Next WATCH | Medical graduate joins Covid-19 front line, thanks to crowdfunding effort