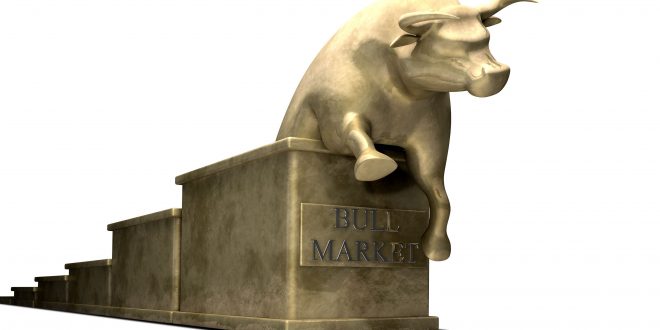 Will the bull market make it to 11, or will coronavirus fears end the stock market’s longest run?

U.S. and international stock markets take a hit over coronavirus fears. Investment pros are advising not to panic, staying the course on retirement.

The coronavirus crisis is threatening the longest bull market in history, just days before it’s set to celebrate its 11th birthday.

So can the battered bull, which just had its worst week since the financial crisis and is still bouncing up and down, stay intact until Monday, when it adds another year to its impressive streak?

After last week’s volatile ride, when the Standard & Poor’s 500 stock index plunged more than 11%, it’s a question worth asking.

The fear is that the spreading virus will continue to disrupt supply chains and could create enough panic to keep consumers out of stores and business people out of airplanes and conference halls for extended periods of time. If a shock of that magnitude were to occur, it could boost the odds of a recession and hurt corporate profits, market analysts warn.

In a surprise move, the Federal Reserve cut its benchmark interest rate by a sizable half-percentage point Tuesday in an effort to support the economy in the face of the spreading coronavirus. (March 3)

For the moment, the broad market still has some wiggle room. For the S&P 500 to fall 20% from its closing record high, which is the definition of a bear market, it would need to fall another 9.8 percent to 2708.92 in the next four trading sessions from Tuesday’s close of 3003.37. That would essentially require a replay of last week’s historic sell-off. And while many U.S. companies have warned that sales have slowed and future profits will be down due to the coronavirus shock, the full extent of the hit businesses and the economy will take is difficult to estimate.

Investors fear bear markets, especially after the S&P 500 fell nearly 57% during the last one in 2007-09. The average decline in bears since 1929 is roughly 40%, according to S&P Dow Jones Indices.

While there are no perfect past market comparisons for the coronavirus, many Wall Street pros note that the economy and markets were able to recover from prior shocks that froze economic activity for a time, like the 9/11 terror attacks and health scares caused by SARS (2003), swine flu (2009) and Ebola (2014). In all three virus scares, for example, stocks were higher six and 12 months later following an outbreak, data from First Trust Portfolios L.P. show.

Still, stocks face continued challenges from the virus as the crisis plays out.

“The bull market is wounded,” Chris Rupkey, chief financial economist at MUFG, a global financial group, said in a note to clients Tuesday.

A previous version of this video incorrectly stated how many people the 1918 Spanish influenza killed.

And the threat of the coronavirus to the national U.S. economy is real, Jerome Powell, the chair of the Federal Reserve, acknowledged Tuesday following the central bank’s surprise decision to cut its key interest rate by half of a percentage point to provide support to the economy.

“The coronavirus poses evolving risks to economic activity,” the Fed said in a statement. And while Powell said the rate cut won’t reduce the number of coronavirus infections or fix severed supply chains, he said the move is intended to “provide a boost to the economy as well as household and business confidence.”

Wall Street, though, didn’t exhibit much confidence after the Fed’s announcement.

Instead, after an initial rally on the Fed news, selling returned and the S&P 500 finished the day down 2.8%, wiping out almost two-thirds of Monday’s big rally. And in the latest sign of investor nervousness, the yield on the 10-year Treasury note, which is viewed as a haven in troubled times, briefly dipped below 1% for the first time ever. Investors worry that, despite the Fed’s rate cut, lower borrowing costs won’t incentivize people enough to go shopping or go out to eat or attend public events if they fear catching the deadly virus.

“While an easing of financial conditions is always desirable in times of economic and market stress, it is questionable as to what other benefits will be derived from this action,” says Chris Zaccarelli, chief investment officer for Independent Advisor Alliance.

So, is a bear market imminent?

It’s possible. But the timing is also tricky.

“There’s a high probability of being down 20% during this correction,” says Stephen Janachowski, president and CEO of wealth management firm Brouwer & Janachowski. “It’s hard to say how long the correction will last. The depth of the correction will be based on the markets’ fear of how much economic damage the virus-scare triggers.”

The spread of the virus: The more cases that crop up in the U.S. and the more steps are taken to contain it, the bigger the likely negative impact on the economy, says Sung Won Sohn, a business economist at SS Economics and professor at Loyola Marymount University. “It will get worse before it gets better,” Sohn says. “The economic consequences of the community spread will be serious, raising the probability of a recession to 50% from about 15% around the turn of the year.”

Investors, he says, are closely watching whether fear or supply-chain disruptions caused by the coronavirus will “keep business from doing business.”

But quantifying how much earnings will go down, how many workers may eventually lose their jobs, and how much growth will slide due to virus fears is difficult.

Fear and panic: As markets learned last week and again Tuesday, panicky investors tend to tear up their long-term investing plans and sell stocks if they think the virus won’t be contained and shares will go even lower.

“The biggest risk is that governments overreact” to contain the virus, chocking off growth, says Janachowski. Reports of museums shutting down, or mass travel bans, and other forms of virus containment could scare people enough to cause them to hunker down. “Extreme pessimism” is also a risk, he says.

Often, there’s a fine line between government officials and central bankers boosting investor confidence or eroding it. While the Fed’s intent for cutting interest rates Tuesday was to send a message that they’re taking steps to alleviate the economic hit from the coronavirus, some Wall Street watchers say it had just the opposite effect, fanning fears instead.

“The nature of (Tuesday’s) announcement could send the wrong signal to market participants, including individual investors who are concerned with the recent market volatility,” said Roger Aliaga-Diaz, chief economist, Americas, for Vanguard.

An unruly market with wild point swings is likely to spook investors –and that’s not likely to work in the bull’s favor, either.

What could revive the bull?

Successfully fighting the ‘psychological virus’: While government leaders and central bankers “cannot do much about the disease, (they must) fight against the ‘psychological virus’ which caused the latest setback in the market,” says Sohn. In addition to providing enough liquidity to avoid a cash freeze like the one that occurred during the Great Recession, government officials and financial pros must hone a calming message and reiterate that steps are being taken to contain the virus.

Cheaper stock prices: Before the recent market’s freefall, the S&P 500 was selling at 19 times its expected earnings for the next year, but the sell-off has brought the market’s price-to-earnings ratio down to roughly 16.5. At some point, buyers will think enough potential economic bad news is already reflected in lower stock prices. That could present a buying opportunity like the market’s 4.6% rally on Monday following last week’s plunge.

“After the recent correction, the market is not as overvalued as it once was,” Sohn says. “Besides, the U.S. economy remains strong even though some slowdown is ahead of us.”

A Biden bump: Many investors fear voting that signals that Bernie Sanders will win the Democratic presidential nomination because his economic policies are not viewed as market-friendly. A strong showing from Joe Biden on Super Tuesday and elections ahead could reduce fears that Sanders will be the one facing off against President Trump in November. “A President Bernie Sanders would prove a real risk to this bull market,” says Zaccarelli.

Time: It will take time for investors to learn if the worst-case coronavirus fears play out, and for the virus to run its course. When it does, investors will have more information to assess the damage to the economy and better estimate the future growth outlook.

“The biggest boost to markets,” Zaccarelli says, “would be the passing of the COVID-19 threat with minimal economic damage and that is impossible without the passing of time, so we are likely to live through uncertainty at least through this summer.”

Previous Coronavirus updates: U.S. preps for a pandemic as COVID-19 claims 6 lives in Washington state
Next Joe Burrow on Tom Brady: “Don’t compare me to the best player of all time”