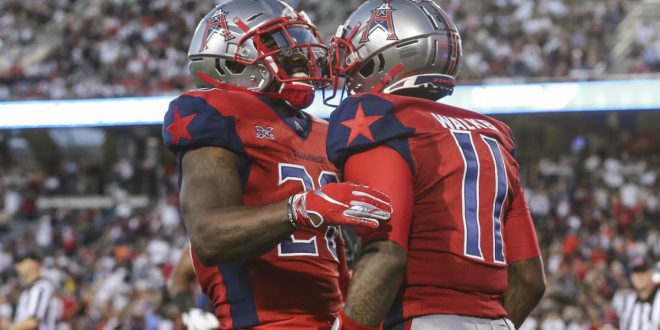 ARLINGTON, Texas — The first weekend of the XFL started fast and ended with a thud. Perhaps that’s to be expected for a start-up football league, but in four games, there was a lot of potential of what this league can be … and what it hopes it won’t be. The second half of the D.C-Seattle game was thrilling, fun football. It was the perfect start for a league looking to put its best foot forward. And the show put on by Houston quarterback P.J. Walker (more on him later) gave this league a lot of reason for optimism.

But Sunday’s games were a different story. New York’s 23-3 thumping of Tampa Bay was a bad mixture of poor quarterback play meets stout defense. And then the nightcap of St. Louis and Dallas was a defensive struggle to the tune of 15-9. That low-scoring, sluggish play was by design, though. Renegades coach Bob Stoops is a defensive mind and BattleHawks coach Jonathan Hayes, who’s known Stoops for years, said after the game he had an inkling Stoops would try to grind things out a bit. That’s good coaching.

What’s not good are the mistakes. Turnovers, penalties, negative plays and general miscues are the type of things that make casual fans lose interest quickly. Granted, every team needs a few weeks to work out the kinks. And not every team is going to have a great quarterback. Understanding those things are prerequisites to enjoying this league. And give the XFL this: the product is further ahead in Week 1 than what many expected it would be. However, sitting in the Globe Life Park press box, the BattleHawks-Renegades game was a sloooooooooooow three-plus hours. Even the most unwatchable AAF games moved quickly.

So while Saturday provided fans with the type of excitement they were hoping to get from the league, Sunday was evidence that start-up leagues still face uphill battles getting watchable football on television. But if the football is more consistently good by Week 3 or Week 4, this league should be fine.

Here are six more takeaways from Week 1 in the XFL.

The Renegades scored precisely zero (0) touchdowns in a 15-9 loss to the BattleHawks. While the blame will probably be directed at quarterback Philip Nelson, there’s only so much merit to that. The reality is St. Louis had a terrific defensive game plan focused on forcing Nelson to check down his passes rather than push the ball vertically. “We knew they were going to use a lot of mesh routes, that kind of thing,” BattleHawks coach Jonathan Hayes said after the game. Nelson didn’t play terribly — he went 33 of 42 for 209 yards, but that averages out to five yards per attempt. And things weren’t any better on third downs (1 of 10) or in the red zone (0 for 2). Fans began clamoring for Landry Jones, who has been battling a knee injury. To be sure, the two will be in a quarterback competition when Jones is healthy and ready to go. Jones may be able to open up Hal Mumme’s playbook a bit more, but right now Dallas is going with Nelson. He’s not a bad option, but the limitations were pretty obvious.

There are a few things the XFL does that the NFL should take a hard look at adopting. The kickoff changes are one of them, but if you’re looking for the big winner, it’s the XFL’s transparency on instant replay. The AAF also pushed this hard a year ago and it was a massive success. The overall ability to see and hear exactly what’s going on in the replay booth makes for interesting television. More importantly, though, it’s not hiding anything. Given the amount of flak the NFL takes regarding its officials and its review process, it would behoove them to seriously consider it. It’s easy to do and it makes the broadcast, and product, better.

Roughnecks in the mix for XFL title?

Yeah, yeah, it’s been one game. But here’s the deal: You need a good quarterback to win in the XFL. There aren’t 32 great quarterbacks in the NFL, so there definitely won’t be eight great ones in this league. Houston’s P.J. Walker looked like he could be a great XFL quarterback in Saturday’s 37-17 rout of L.A. The offensive explosion was hinted at during training camp by Randy Mueller, the Roughnecks’ director of player personnel. The former Salt Lake Stallions staffer said that he felt confident about his team’s quarterbacks and wide receivers heading into the season. It sure looks like he had every reason to be confident. The Roughnecks have what appears to be a solid quarterback, good receivers and a coach (June Jones) who will give them every opportunity to make plays. After watching the first four games, that combination is at a premium.

The Vipers couldn’t get anything going offensively in a 23-3 loss to the Guardians. Quarterback Aaron Murray had two bad interceptions plus a fumble. That led coach Marc Trestman to bring Quinton Flowers off the bench in the second half, and while Flowers couldn’t help the offense score a touchdown, he did make one nice throw for 37 yards while adding another 34 yards on the ground at 6.8 yards per rush.

Quarterbacks can take a brunt of the blame when things are bad. In Murray’s defense, protection was an issue and led to at least one, if not two, of his turnovers. It wouldn’t be surprising to see Trestman go with Murray again in Week 2 at Seattle. The Vipers had the highest win total from bookmakers before the season, which would indicate they felt good about Tampa Bay’s quarterback situation. After that dud of a debut, oddsmakers may have to rethink that total.

The former Temple product was deemed too short and perhaps a bit too slow to make it in the NFL, but he was unstoppable in Houston’s 37-17 rout of Los Angeles on Saturday afternoon with four touchdowns and nearly 300 yards of total offense. Sure, he’s a touch short and a tad slow in the 40, but he can ball. He’s everything this league should want in a quarterback.

Listen, the XFL needs this type of trickeration to keep everyone on their toes. It’s great that Defenders coach Pep Hamilton reached into his bag of tricks right out of the gate.