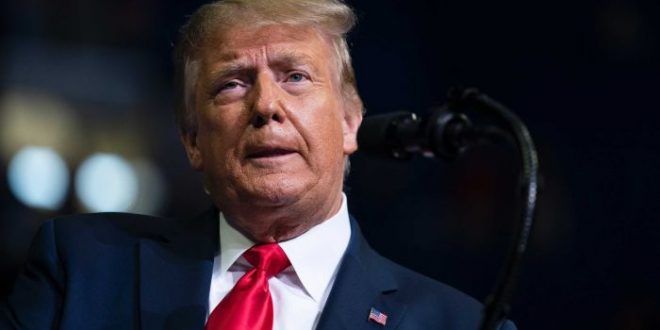 US President Donald Trump says he ordered authorities to slow down the rate of coronavirus testing because it was adding to the number of COVID-19 infections being recorded.

Mr Trump was speaking at a re-election rally in Tulsa, Oklahoma, pressing ahead with the gathering despite it being revealed that six campaign workers who helped set it up had tested positive for the virus.

The US is the world’s worst-hit country, recording more than 2.3 million COVID-19 cases during the outbreak that has so far killed nearly 120,000 Americans and put 40 million more out of work.

Mr Trump described testing as a “double-edged sword”, saying: “When you do testing to that extent you’re going to find more people.”

“You’re going to find more cases, so I said to my people, ‘Slow the testing down please.’

Mr Trump said his actions in blocking travellers from China and Europe had helped save “hundreds of thousands of lives”.

But he said the “radical fake news” media had not given him credit for doing what he called “a phenomenal job” responding to the outbreak.

“I saved hundreds of thousands of lives,” Mr Trump said.

He used terms such as “kung flu” virus and “Chinese virus” to refer to COVID-19.

“That name gets further and further away from China, as opposed to calling it the Chinese virus,” Mr Trump said.

In the hours before the event, crowds seemed significantly smaller than expected, and campaign officials scrapped plans for Mr Trump to address an overflow crowd outside the main arena.

Mr Trump blamed the media for declaring “don’t go, don’t come, don’t do anything” while insisting there were protesters outside “doing bad things”.

The small crowds of pre-rally demonstrators were largely peaceful.

“We begin our campaign,” Mr Trump said at the beginning of his address. “The silent majority is stronger than ever before.”

Campaign communications director Tim Murtaugh said “quarantine procedures were immediately implemented”, and that neither the affected staffers nor anyone who was in immediate contact with them would attend the event.

News of the infections came just a short time before Mr Trump departed for Oklahoma.

Mr Trump was angry that the cases were made public, according to two White House and campaign officials who spoke on condition of anonymity because they were not authorised to speak publicly about private conversations.

Previous Despite the lockdown success, we’re far from done with COVID-19
Next Coronavirus deaths in U.S. could reach 200,000 by October