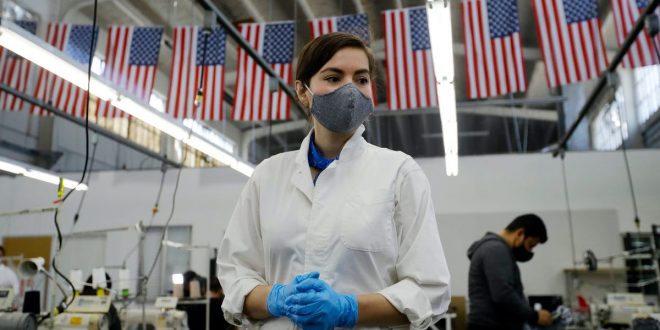 American workers are being hung out to dry during the pandemic

Across the US, frontline workers are facing down dangerous conditions caused by the COVID-19 pandemic.

An outbreak that started at a Smithfield food processing plant in Sioux Falls, South Dakota, has resulted in more than 1,000 linked cases and is one of the largest identified outbreaks of COVID-19 cases in the nation. An investigation by Buzzfeed showed that the company failed to take steps to head off the outbreak.

And the federal government’s chief watchdog for worker safety, the Occupational Safety and Health Administration, announced it will not enforce coronavirus safety guidelines if meat processing plants act in “good faith.”

Outside of meat plants, other workers are fighting unsafe conditions. Nurses in Pittsburgh, Santa Monica, and Michigan went on strike in an effort to obtain personal protective equipment as thousands of frontline healthcare workers are exposed to patients with COVID-19.

Experts say that frontline workers are being exposed needlessly to COVID-19, due to a lack of clear federal standards protecting them.

“There is no leadership because federal OSHA has rolled over and said we are not protecting workers,” says Debbie Berkowitz, a former OSHA policy adviser during the Obama administration.

Ten years ago, after the outbreak of H1N1, also known as swine flu, the Obama Administration began work on regulations that would have protected workers in the event of a pandemic like COVID-19. However, for more than a decade large corporations blocked these rules from being implemented.

This delay means that workers are now needlessly risking their health in unsafe conditions and risks extending the length of the pandemic as businesses scramble to figure out what to do to confront the crisis.

In 2009, the Obama Administration began rulemaking on a series of bold reforms that would have created workplace safety standards against infectious disease for frontline workers. The rulemaking followed the outbreak of the H1N1 epidemic in 2009 that killed 4,000 Americans.

“There was enormous outreach; we were working incredibly closely with the CDC right away. We were working with unions and the whole AFL-CIO and all the associations that represented nurses and social workers,” says Berkowitz, who now serves as the Worker Health and Safety Director at the National Employment Labor Project.

“We actually had them in, talking with us, and developing protocols,” says Berkowitz.

However, for the better part of a decade, the rules went nowhere after Republicans took control of Congress in 2012. Worried about budget cuts if they implemented the rules, the Obama Administration simply sat on them.

Then in 2017, one the Trump administration took office, OSHA ended the rulemaking process and buried the ideas.

So now, in the face of the coronavirus pandemic, workers are left with little protection and employers have few clear guidelines.

Unsafe conditions during a pandemic

Congress has so far yet to pass any workplace safety rule for OSHA to implement for frontline COVID-19 workers, and given the delay in the Obama-era OSHA rules, there is little help for workers.

“If there is no specific standard, then OSHA can do almost nothing to protect workers. OSHA would have to wait till nurses and healthcare workers got sick before they could do anything,” says Berkowitz. “There is no ability to really be preventive without a specific standard.”

In an April email obtained by various news outlets, a current OSHA official said that the agency was handcuffed by the lack of rules to act.

“We have received a number of complaints every day for the past several weeks about employers failing to follow the guidance. As an organization, all OSHA can do is contact an employer and send an advisory letter outlining the recommended protective measures,” wrote the OSHA official.

“There is not federal coordination like we have seen after disasters to make that happen,” says Marianela Acuña-Arreaza of the non-profit National Council for Occupational and Health Safety.

A tough time for a hollowed out agency

The lack of clear rules to protect workers during the pandemic is also compounded by the decade-long erosion of OSHA’s ability to even perform the inspections that could catch unsafe conditions.

Under the Trump Administration, the number of OSHA inspectors has dropped to its lowest level in the agency’s 48-year history, according to a study by the National Employment Law Project.

Due to years of budget cuts by a GOP-controlled Congress, the number of OSHA inspectors dropped from nearly 1,000 in 2010 to 815 in 2016. Now, through attrition and a federal hiring freeze imposed by the Trump administration, only 752 inspectors are employed.

The problem of understaffing isn’t new to OSHA; the agency has perennially been underfunded. Therefore, OSHA has developed targeted rules that allow it to focus on specific problems. Without an infectious disease standard in place, OSHA is extremely limited in its legal ability to be a watchdog for workers.

Under President Obama, OSHA, with its limited staffing, has also relied heavily on their collaborations with unions to help them target employers and educate workers about hazards. This time around, OSHA hasn’t invited in worker advocates to coordinate strategies to combat COVID-19.

“The coordination is extremely lacking right now. We haven’t seen any type of support on how to get workers trained on how to take care of themselves,” says Acuña-Arreaza.

However, despite the lack of coordination, workers’ rights advocates like Acuña-Arreaza are working to educate workers about their rights. She says that turnout for their workplace and safety training are at record numbers.

Frustrated by a lack of federal attention, workers have gone out on strike at over 115 employers across the US, according to a strike-tracking map built by my publication, Payday Report.

Advocates say that it’s time for workers to press to include the OSHA standard as part of the next congressional coronavirus aid package, enacting reforms for workers for years to come.

“This is a crisis, but it could also be a moment where workers build power,” says Acuña-Arreaza.