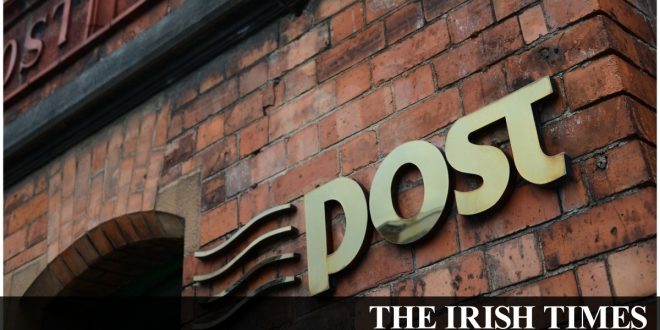 An Post’s plans to enter the mortgage market in the first half of this year have been hit by the economic fallout from Covid-19, which has seen loan approvals slump and lenders preparing for a surge in bad debts.

While the State-owned postal service operator, which first said in 2018 that it was aiming for a slice of the recovering home loans industry, remains committed to entering the market with a partner, sources said that the timeline has been pushed out.

A spokesman for the company declined to comment on the delay.

An Post secured board approval in September 2018 for a new financial services strategy, signalling at the time that it planned to offer mortgage rates priced at a 1 percentage point discount to the market.

The Republic has among the highest home-loan rates in Europe, mainly as a result of the nation’s lenders being required, as a legacy of the arrears crisis of the past decade, to hold much more capital against loans than elsewhere. The latest Central Bank data shows that the average interest rate on new mortgages was 2.80 per cent in March, compared with a euro zone average of 1.31 per cent.

An Post set out early last year to find a partner to underwrite mortgages that would be sold under the company’s brand – similar to how Bank of Ireland provides home loans through the UK Post Office.

The company, led by chief executive David McRedmond, is believed to be focused on securing a joint venture with an overseas lender not currently in the Irish retail market. The spokesman declined to comment on potential partners.

Mr McRedmond indicated in an interview late last year that An Post plans to build a mortgage market share of between 5 per cent and 10 per cent over time.

Mortgage lending in the State rose by more than 9 per cent last year to €9.5 billion, the highest in more than a decade, according to Banking & Payments Federation Ireland (BPFI) data. The figure was well off a peak of €40 billion of loans extended in 2006, just before the crash.

While mortgage lending was close to an inflection point with new lending topping loan repayments in the first quarter, Covid-19 has hit home loans activity since mid-March.

Data published by BPFI last week showed that the number of mortgages approved by Irish banks in March declined by almost 10 per cent. This reflects both increased caution by would-be housebuyers and by lenders.

Estate agents Sherry FitzGerald has forecast that home sales will fall at least 25 per cent this year.

A number of banks and other mortgage lenders have suspended the use of exemptions to the Central Bank’s lending restrictions as they grapple with the impact of Covid-19 on the economy, which the Government sees contracting by 10.5 per cent this year.

Some lenders are withdrawing loan offers and approvals in principle if borrowers’ incomes or employment have been affected by the crisis or their employer is availing of the Government’s wage subsidy scheme to support salaries.

Bank of Ireland, AIB and Permanent TSB, in which the State continues to hold large stakes following taxpayer bailouts during the last crisis, are expected to show in trading updates this week how they are setting aside provisions to deal with an expected spike in bad debt resulting from the coronavirus pandemic.