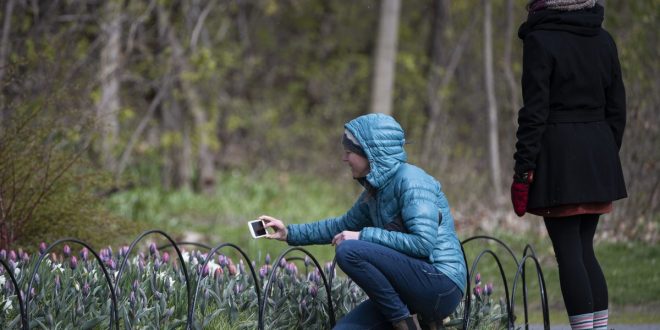 A photography ban created to ensure flower lovers keep their distance has been reversed in Ottawa after public outcry, marking the latest retreat on physical-distancing rules from officials in the national capital.

Late Friday, the National Capital Commission – a federally run agency – agreed its new rule, rolled out to coincide with the start of the Canadian Tulip Festival, was an overreach and said signs banning pictures would be removed.

“Dear all: our bad!” the commission posted on Twitter.

The commission said the rule was implemented and signs were installed to “balance access to the outdoors [and] public health directives.”

On Saturday, staff were in Commissioners Park and Major’s Hill Park removing small signs, which depicted no stopping and no photos, from the base of flower beds and cutting larger signs down from the park entrances. The commission says it had “no intention” of enforcing the signs and there were no fines attached to the rule.

Spokeswoman Caitlin O’Higgins said the signs were installed in an “attempt to help prevent crowding around our immensely popular tulip beds.”

The reversal follows previous flip-flops from the municipal government, which fleetingly recommended against talking to neighbours over fences, driveway beers and visiting loved ones through their windows at long-term care homes.

Asked whether some officials have become overzealous as they try to limit the spread of COVID-19, Prime Minister Justin Trudeau said Saturday different levels of government “are trying as best they can.”

Ottawa Mayor Jim Watson told reporters on Friday that the no-picture rule seemed “a little strong” and he hoped the federal agency would reconsider its directives.

The festival is a major tourist attraction in Ottawa. With the pandemic all but stopping international and inter-provincial travel, the NCC also closed parking lots to deter local crowds from descending on the gardens. Even without those measures temperatures hovering around the freezing point on Friday and Saturday and a mix of hail and snow guaranteed a sparse crowd for the festival’s launch over the Mother’s Day weekend.

The decision to reverse the photo ban was met with mixed reaction from people walking through the gardens, wedged between Dow’s Lake and the city’s Little Italy neighbourhood.

Anne and Mario Cappelli, who live around the corner from the park, sent an e-mail to the NCC and Ottawa Public Health raising concerns about the influx of people the tulips would bring.

The reversal, Mr. Cappelli said, “was an awful decision.”

Ms. Cappelli said the short-lived ban was meant to stop incidents like the couple witnessed on Friday when a family asked an elderly woman to take some pictures of it, increasing the risk that the different households were sharing germs.

“It was 100 per cent the wrong decision to allow picture-taking,” Mr. Cappelli said.

Others called the photo ban “ridiculous,” while Janet Jull said she’s happy the rule was reversed but doesn’t fault decision-makers who are also trying to navigate the new normal, leading to a “bit of a back and forth.”

“We’re finding our way forward together,” she said.

The bright blooms are planted every year to commemorate the Dutch royal family’s gift to Canada at the end of the Second World War. The present of 100,000 tulips was given by Crown Princess Juliana in 1945 to mark Canada’s contribution to the liberation of the Netherlands and as thanks to Ottawa for sheltering her family during the war.

The gift was repeated this year to mark 75 years since the liberation of the Netherlands.

Know what is happening in the halls of power with the day’s top political headlines and commentary as selected by Globe editors (subscribers only). Sign up today.

Previous An Post mortgage plans delayed by Covid-19 crisis
Next Coronavirus pandemic: Updates from around the world