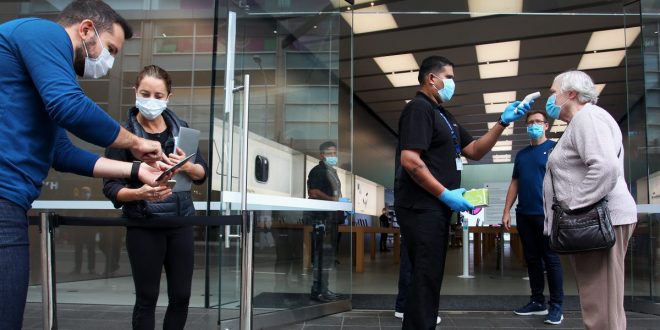 Roughly one month after Apple began re-opening some stores in the United States, it’s once again shuttering a handful of locations in states like Texas, Florida, and Arizona among others where coronavirus cases have spiked.

Apple said on Wednesday that it would close seven stores in Texas, a decision that comes after the tech giant said last Friday that it’s re-closing 11 stores across Arizona, North Carolina, South Carolina, and Florida. The move came as the US experienced its highest single-day total of new coronavirus cases with more than 36,000 new cases on Wednesday, according to The Washington Post.

The decision to close Texas stores in the Houston area also came just before Governor Greg Abbott announced on Thursday that the state would pause further reopening phases as it responds to increasing COVID-19 cases.

It’s a critical decision suggesting that Apple is relying on the available data on coronavirus cases and its continued spread as the biggest indicator of whether its stores should remain open, not just the reopening plans that are being implemented in these states.

In other words, just because Apple stores are allowed to remain open doesn’t mean the company necessarily believes they should be. And that’s important because Apple’s moves have in some cases preempted broader measures in the past when the coronavirus initially began disrupting daily life in the US.

All 50 states across the country have reopened at some capacity under restrictions, with rules varying by region. The states where Apple has re-closed stores were some of the earliest to lift their stay-at-home orders.

States like New York and New Jersey — once the epicenter of the outbreak — as well as Pennsylvania and New Hampshire waited until the end of May or June to begin any sort of reopening. (Some states, like Georgia and Alabama, lifted all restrictions much earlier, and others like Wyoming and Oklahoma never enacted statewide stay-at-home orders).

These states that reopened early or never had restrictions — Texas, Florida, Arizona, South Carolina, North Carolina, Georgia, Alabama, Wyoming, and Oklahoma — are also among the 29 states where newly reported cases have been increasing over the past 14 days as of June 25, according to an analysis by The New York Times.

The decision to re-close stores also proves Apple is committing to the strategy it outlined last month, when it said it may close stores again if necessary.

“We look at every available piece of data — including local cases, near and long-term trends, and guidance from national and local health officials,” Deirdre O’Brien, Apple’s senior vice president of retail and people, said in a letter last month. “These are not decisions we rush into — and a store opening in no way means that we won’t take the preventative step of closing it again should local conditions warrant.”

Apple’s decision-making throughout the pandemic has generally been ahead of the curve. Back in March, Apple made the unprecedented decision to close all of its retail stores outside of China days before stay-at-home and lockdown orders were implemented in much of the US.

It also restricted employee travel to Italy and Korea on March 3, as Bloomberg first reported, just days before the number of new daily cases began to jump significantly in Europe and the rest of Asia.

Apple closeness to China, its third-largest market and where much of its supply chain is based, may have given the company an advantage when handling the virus. Its ties to the country likely means it was paying close attention to the coronavirus long before it disrupted daily life in the US. Apple was also able to apply its learnings from coping with the pandemic in China to other parts of the world, including the US, as the virus spread.

“What we’ve learned together has helped us all develop best practices that are assisting enormously in our global response,” Apple CEO Tim Cook wrote back in March.

That doesn’t mean Apple’s recent store closures are a sign that the economy will shut down the way it did throughout March and April, when the pandemic was at its worst. President Trump recently said so himself.

What it could mean, however, is that even though life may feel like it’s starting to return to normal, particularly compared to March and April, the coronavirus is far from being behind us. According to Dr. Mike Ryan, executive director of the World Health Organization’s Health Emergency Programme, we’re still in the first wave of the virus.

“There is a careful balance to be struck between keeping everyone at home and continuing to completely suppress transmission of COVID-19 and the untoward effects of that on the economy and society — and that’s not an easy balance,” Ryan recently said during a media briefing. “This is a public health dilemma, and it’s one that has to be carefully managed and balanced by every government every minute of every day.”