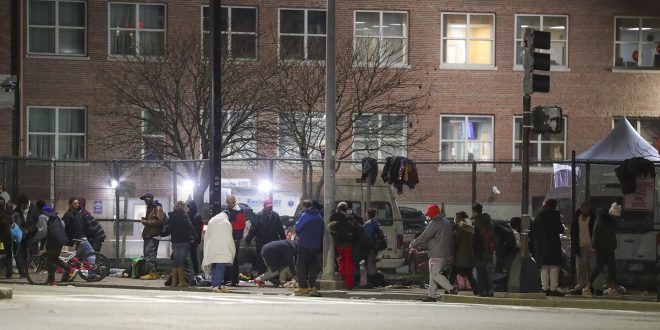 Over the weekend, a man in North Dakota was arrested for coughing at a local Walmart. The store, like all Walmart stores, was limiting the number of people allowed in at once. The man apparently wasn’t happy to hear that, and intentionally coughed on store employees, the police chief said.

He joins a growing list of people arrested in the US for intentionally coughing in public in the past few weeks, as the accelerating outbreaks of the novel coronavirus in states around the country put people on edge, alert for the slightest sign that they could be exposed to the illness. COVID-19 is a respiratory virus and spreads through tiny droplets of saliva produced when a sick person coughs, sneezes, or breathes.

Those people aren’t being arrested under coronavirus-specific laws, says Lindsay Wiley, director of the health law and policy program at American University Washington College of Law. Men in North Dakota and New Jersey, for example, were charged with terroristic threats, or threatening to cause physical harm or violence to someone. Prosecuting them for coronavirus-specific physical harm would be much harder.

“You would have to show person who did the coughing was infectious, and was capable of transmitting the disease,” Wiley says. Since testing is so limited now, it’s a hard case to make: the cougher would have to know they were infected for someone to prove they intentionally spread the virus. The coronavirus is also so widespread that if someone who had been coughed upon got sick, it’d be hard to prove exactly where they got it from — it could have been from anywhere.

Creating or jerry-rigging laws to punish people for specifically spreading COVID-19 is technically possible, and people may feel like those who don’t take the virus seriously or who give it to others should be punished. But turning someone who passes on a disease into a criminal doesn’t keep a community safer, Wiley says.

Public health experts have seen that ineffectiveness play out with other viruses. There are already criminal laws in dozens of states that punish people with HIV who engage in activities that may put others at risk of contracting the virus — even activities that pose an extremely low risk of spreading HIV, like oral sex. “There’s no evidence that criminalizing those types of activities is effective as a disease control strategy,” Wiley says. The type of person who would actually, intentionally give someone else a disease isn’t dissuaded by a criminal law, she says.

“What it does is have a big effect on people who would never intentionally spread disease, because its a chilling effect on getting tested,” she says. “It’s not going to help with those tiny number of people who would do that, and it might cause problems in efforts to reach people who are well-intentioned.” People may be reluctant to get tested or tell people that they’re sick with a virus if they’re afraid of getting arrested, which can hinder public health efforts. Vulnerable or low-income people, who aren’t able to avoid the type of contact with others that could pass on the novel coronavirus — because they work a service job, for example — would be more likely to be affected by these laws. That would add another layer to existing inequities that are being made worse by the disease.

In most states, legislators would have to create a new law specific to COVID-19 if they were considering treating it the same way some do HIV. Logically, creating coronavirus laws would be more difficult than HIV laws because this disease is much harder to trace than something that’s sexually transmitted.

“I could see some city council member deciding [they] want to be seen as taking tough action here,” Wiley says, despite the fact that there’s evidence that these types of laws do more harm than good. “I would hope that lawmakers wouldn’t waste their time.”