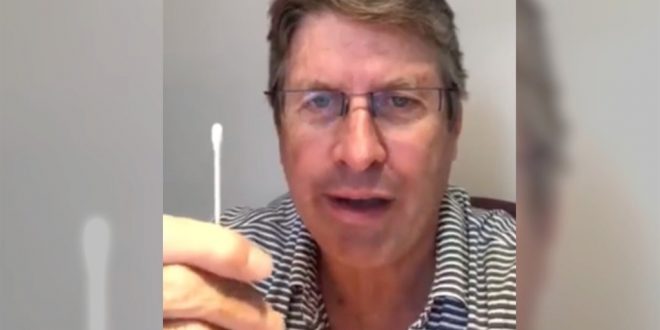 The man who posted a fake video relating to Covid-19, claiming testing kits are possibly contaminated, has been arrested.

Police spokesperson Brigadier Mathapelo Peters said the 55-year-old man was expected to appear in court on Tuesday following his arrest on Monday by police from Parow police station in Cape Town.

In the Facebook video, which has been widely distributed on social media, a man – whose name is known to News24 – calls on South Africans to refuse Covid-19 testing.

With a cotton bud stuck up his nose, he claims he is giving South Africans “the most important message you will ever hear in your entire life”.

He then claims that the South African government will send 10 000 workers door to door, with the police, to test for Covid-19.

“Do not under any circumstances allow them to test you. There’s a possibility that the swabs are contaminated with Covid-19.”

The man then claims that, globally, the swabs are used to “spread the virus”, without providing any evidence to support his claim.

He cites a single incident of one production firm, Luxembourg-based manufacturer Eurofins, which told UK labs on Monday that deliveries of Covid-19 kits would be delayed as core parts had been contaminated with coronavirus, as “proof”.

On his Facebook page, the man paradoxically also claims that Covid-19 “is a total lie”, that 5G cell masts “will kill thousands of South Africans and people around the world with radiation”, and that people will be microchipped and the state will monitor their every move.

“The suspect has been charged in terms of Regulation 11(5)(c) of the Disaster Management Act, in relation to ‘publishing any statement through any medium including social media with the intention to deceive any other person about measures by the government to address Covid-19’,” Peters said.

The DA on Monday pressed charges against the man, saying these criminal charges are “meant to send a strong message to South Africans that the spreading of fake news will not be tolerated”.

“Spreading fake news, as this person has done, is against the Covid-19 Disaster Management Regulation 11(5) which prohibits and criminalises the spread of fake news pertaining to efforts of combating this pandemic. The regulations are clear that transgressors can be jailed for up to six months,” the party said.

This is a developing story.