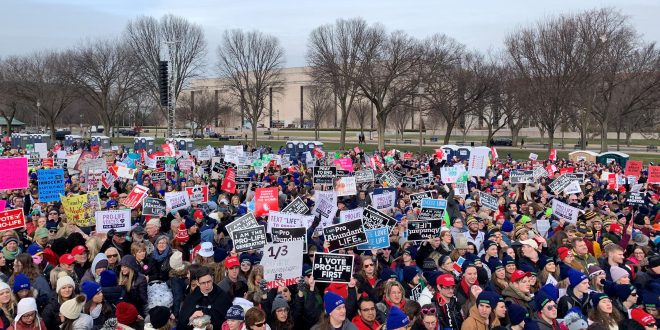 President Donald Trump called it his “profound honor” on Friday to be the first president to attend the annual anti-abortion gathering in Washington called the March for Life. (Jan. 24)

WASHINGTON — In a pivotal year in the legal battle over abortion, tens of thousands of anti-abortion activists gathered in Washington, D.C., on Friday for the annual March for Life that featured President Donald Trump as the first sitting president to appear in person at the event in its 47-year history.

Calling it a “profound honor” to be the first president to attend, he said that “unborn children have never had a stronger defender in the White House,” citing his own actions.

“When it comes to abortion … Democrats have embraced the most radical and extreme positions,” Trump said.

In some ways, his speech resembled the ones he gives at campaign rallies. He recited praise for the size of the crowd, bragged about the number of federal judges he has appointed, and attacked Democrats over social policy.

Trump also appeared to make a reference to impeachment by telling abortion opponents: “They are coming after me because I am fighting for you.”

In his speech at the rally, Trump made a special appeal to women, saying they are using the power of “their votes” to fight abortion.

Following his remarks, the audience responded with chants of “four more years.”

Rachel Maneval, 22, a veterinary assistant, has been marching with her parents since she was a child. She saidTrump’s appearance as the march was “encouraging” for her and for the anti-abortion movement. She was wearing a Trump 2020 hat.

“I hope that people see that it’s for love, not for hatred and disgust,” she said.

In an apparent nod to the powerful impact of women voters in the last two elections, the theme for the gathering in this contentious election year is “Life Empower: Pro-life is Pro-Woman.”

The march is the centerpiece for three days of activities that include a youth rally, a Christian rock concert and an expo featuring anti-abortion organizations and ministries.

One participant, Frances Floresca, 23, a recent graduate of the University of Utah, called the March for Life “the real Women’s March.” She was wearing a beanie that said “Love them both.”

“We are fighting for women and babies,” she said. “We’re standing for the women who need to be strong so they don’t get an abortion.”

Both Patricia Carroll, 60, and Bonita Ravolt, 78, arrived from Chicago to attend the March for Life for the third time.

“I’m so proud to be here, and see all these beautiful mothers and beautiful fathers,” she said.

The annual event began in 1974 when a small group of anti-abortion activists, who were trying to lobby Congress over the issue, sought to draw attention to the one-year anniversary of the Supreme Court’s Roe v. Wade ruling that declared unduly restrictive state regulation of abortion unconstitutional.

Carroll, who works at American Airlines, said she was in the eight grade at the time of the Supreme Court ruling and has been against it since then.

“My mother was very pro-life, and it was always instilled with me how wrong that law was,” she said. “I can’t wait until abortion becomes unthinkable,” she added, mirroring the term used frequently by speakers and March for Life organizers.

This year is a critical one for both the abortion rights and anti-abortion forces as the Supreme Court relitigates a 2016 ruling that made it harder to get abortions in Texas.

The high court will likely rule on a similar law in Louisiana, requiring abortion providers to have admitting privileges at nearby hospitals.

Trump’s appearance is particularly striking since past president’s who supported anti-abortion views did so more at a distance. Both Ronald Reagan and George W. Bush steered clear of a personal appearance at the annual march, preferring instead to send remarks for others to deliver, speak via telephone or invite organizers to visit the White House.

Last year, Vice President Mike Pence and his wife, Karen, made a surprise appearance at the march. “We’ve got a record of extraordinary progress on the right to life,” Pence said of the Trump administration. “This will be the generation that restores the right to life in America.”

He later touted the administration’s nomination of conservative judges and allowing “states to defund Planned Parenthood.”

In staking out a higher profile at the event this year, Trump underscores his steady wooing of white evangelical leaders and voters.

“I think it’s a brilliant move,” said Ralph Reed, chair of the Faith and Freedom Coalition and one of Trump’s most prominent evangelical supporters. Reed said the president’s appearance would “energize and remind pro-life voters what a great friend this president and administration has been.”

Hours before Trump’s address, his re-election campaign announced creation of a “Pro-Life Voices for Trump” coalition. It will be “dedicated to recruiting and activating Americans with pro-life values in support of President Trump’s re-election,” the campaign said in a statement.

Democratic opponents said a second term for Trump will mean the end of the Roe vs. Wade ruling establishing abortion rights.

“The Trump administration and Republicans are actively taking away a woman’s constitutional right to make her own reproductive healthcare decisions,” tweeted Senate Minority Leader Chuck Schumer, D-N.Y. “We must keep up the fight to protect Roe and access to care.”

Trump’s anti-abortion position marks a sharp reversal for the free-wheeling New York developer who described himself as “very pro-choice” in a 1999 appearance on NBC’s “Meet the Press.”

During the 2016 campaign for the GOP nomination, Trump said his views on abortion had changed and that he was now anti-abortion except in cases of rape, incest and when the life of the mother is at risk.

Over the last 10 years, the Republican Party has undergone a “revolution,” displaying a new willingness to “embrace the issue as not only being morally right but politically smart,” said Mallory Quigley, a spokeswoman for the Susan B. Anthony List and Women Speak Out PAC. The group is planning to spend $52 million this cycle to help elect candidates opposed to abortion rights. Its president, Marjorie Dannenfelser, will serve as national co-chair of a new campaign coalition, “Pro-life Voices for Trump.”

Last year alone, 58 anti-abortion laws were passed, including 25 that banned the procedure to some extent, according to the Guttmacher Institute, a research organization that supports reproductive rights. Further, the number of abortions performed in the United States reached an all-time low.