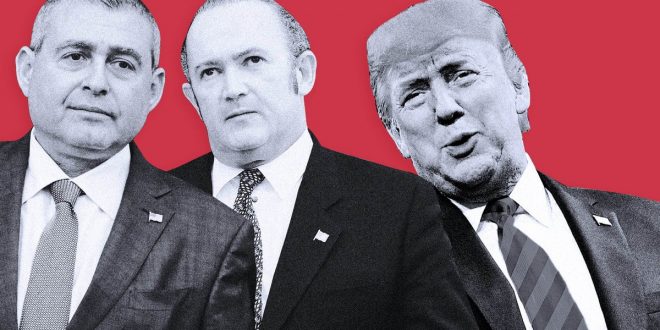 A recently indicted associate of Rudy Giuliani taped President Donald Trump calling for the firing of Ukraine Ambassador Marie Yovanovitch, according to the lawyer for a second Giuliani associate.

Joseph Bondy, a lawyer for Florida businessman Lev Parnas, told The Daily Beast that the recording was made by former partner Igor Fruman. Both men were arrested in October and charged with campaign-finance violations.

ABC News reported Friday morning that it reviewed audio of a dinner attended by Trump, Parnas, Fruman, and others. A voice that appears to be the president’s tells the group that he wanted to “get rid of” Yovanovitch, per ABC, an apparent contradiction to Trump’s claim that he does not know Parnas.

“Last year, before he was arrested, Mr. Parnas personally heard a recording of his April 30, 2018 dinner with the president and others, made by Mr. Fruman, at which the subject of Ambassador Yovanovitch was discussed,” Bondy said. “We have hoped that, to the extent this recording still existed, it would be released to Congress for use in the impeachment trial.”

A lawyer for Fruman was not at liberty to discuss the matter. ABC News review matches the description Bondy gave The Daily Beast. Unnamed sources told the network that Fruman made the recording, which The Daily Beast has not reviewed.

Parnas has previously described a dinner at Trump Hotel with supporters of the president in April 2018 that he and Fruman attended. He said that he raised concerns about Yovanovitch to Trump, and that the president then turned to an aide and told him she should be fired. At the time, Yovanovitch was the U.S. ambassador to Ukraine. Giuliani, Fruman, and Parnas were trying to have her fired.

Trump eventually recalled Yovanovitch in May 2019. Months later, he pressured Ukraine’s president to announce investigations of a company linked to the family of former Vice President Joe Biden. At the same time, Trump withheld military aid that Congress had appropriated for Ukraine. And his team refused to arrange a White House visit for Ukraine’s president, even though they had formally invited him. That pressure campaign is the focus of Democrats’ efforts to have Trump removed from the White House. His trial is currently underway in the Senate.

Previous At March for Life, Trump says the unborn has never had a ‘stronger defender’
Next Google is backtracking on its controversial desktop search results redesign