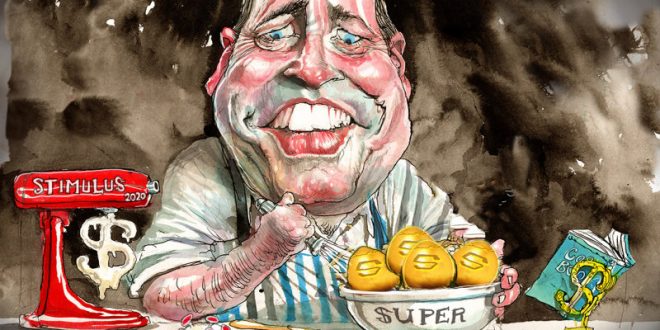 Australia outspent every other country – except Qatar – with the government’s $214 billion fiscal response to COVID-19 pandemic, a new analysis found.

In direct fiscal stimulus, Australia is spending 10.6 per cent of GDP including the JobKeeper wage subsidy and cash handouts to households and business. That was the highest rate of all advanced economies.

BIS Oxford Economics ranked 46 countries that combined, have announced more than $US8 trillion ($13 trillion) in stimulus measures in response to COVID-19. Qatar ranked first with 13 per cent of GDP and Thailand third with 8.9 per cent of GDP.

Singapore was fourth with 7 per cent followed by the United States with 6.9 per cent. Direct stimulus does not include loans or guarantees.

“The fiscal stimulus in Australia was certainly more than we expected and in some sense Australia is reaping the benefits of years of fiscal rectitude,” Mr Sterne said.

“I think most advanced economies have – for the time being – been able to set aside fears of massive debt issuance leading to spiking interest rates.”

The views of the global economist reflect those of conservative political strategist Sir Lynton Crosby, who told The Australian Financial Review this week people had become more accepting of government spending measures.

“Government spending has become girth-busting and people are overwhelmingly comfortable with that at this time. They’re letting the government step in to the economy more deeply and broadly than they have for a very long time,” he said.

While spending is significant, the fiscal expansion will still not see Australia’s debt burden rise above the global average.

Australia’s total gross government debt to GDP ratio was 42 per cent at the end of 2019, while the advanced economy average was 103 per cent.

Port Jackson Partners managing director Byron Pirola said the response from Australia was reflected in the strengthening of the Australian dollar.

“Australia must be poised to navigate the covid-19 downturn better than almost any other nation,” Dr Pirola said.

“The 12 per cent recovery in our exchange rate from US58c to US65c over the last month, perhaps reflects this and if so probably has more to go.”

Yarra Capital Management’s Head of Macro and Strategy Tim Toohey said that while some aspects of the stimulus may take longer to roll out than expected it would still save the economy.

“Even if the full fiscal package does not get deployed within the set time frames, it is important to realise that this fiscal package supporting household income is by far the largest of any period in Australia’s history and three times the payments, as a share of GDP, delivered during the Great Depression,” he said.

“The hit to labour income is more than offset by the combination of peak fiscal stimulus arriving in July simultaneous with an ongoing easing of restrictions. This will be a powerful force for a consumer recovery,” Mr Toohey said.

Germany, UK and France have earmarked billions of dollars in guarantees for new loans to companies. They have committed 29.6 per cent, 15.7 per cent and 13.9 per cent of GDP for loans and guarantees respectively.