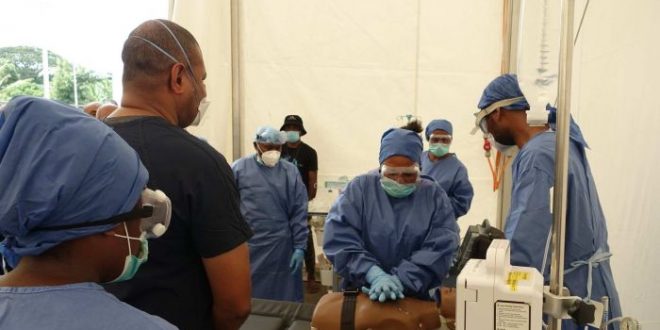 Australia is spending $100 million to help the governments of struggling Pacific countries meet the basic costs of running their countries.

The halt in international tourism due to the coronavirus pandemic and recent damage caused by Cyclone Harold have been devastating for many Pacific economies.

The Australian Government has taken $100 million from existing aid programs to provide “quick financial support” to 10 countries in the region.

Papua New Guinea will receive the most assistance, as it was already struggling to refinance its debts before the global downturn caused by COVID-19.

In a statement provided to the ABC, a spokesperson for the Department of Foreign Affairs and Trade (DFAT) emphasised the need to get financial assistance to the Pacific as soon as possible.

The ABC understands Papua New Guinea will get a $20.5 million economic support package and the Solomon Islands and Vanuatu $13 million.

Timor-Leste will receive $10 million, Fiji, Samoa and Tonga $10.5 million each, Nauru and Kiribati $4.5 million each and $3 million for Tuvalu.

The $20.5 million to bolster PNG’s budget comes on top of a $440 million loan from the Federal Government late last year.

It was intended to be a temporary measure to assist PNG until new Prime Minister James Marape could re-finance the nation’s debt with the help of the International Monetary Fund (IMF).

But the repayment of that short-term loan has now been put on hold, and the aid budget accessed to further support day-to-day government expenses.

The statement from DFAT points to the need “to help Papua New Guinea manage the emerging health, economic and social impacts of the pandemic, and to continue essential services”.

On a visit to Sydney last year, Mr Marape outlined his vision to end PNG’s aid-donor relationship with Australia “within the next 10 years”.

He mapped out his plans to diversify the country’s economy and reduce dependence on overseas support, an ambitious plan that will now be harder to achieve in a time of global economic uncertainty.

The redirection of aid to do just that indicates the serious economic problems some Pacific countries are facing.

But in April, Cyclone Harold “compounded the impact of COVID-19 in the Solomon Islands, in Tonga, in Vanuatu and in Fiji,” she said.

The combined effects of the natural disaster and the pandemic prompted the “pivot” — as Senator Payne described it — in spending priorities in the region.

As well as re-directing aid money to budget support, the $2 billion Australian Infrastructure Financing Facility for the Pacific will factor in potential for economic growth, employment and health outcomes in assessing projects it will fund.

Previous Trump says he takes hydroxychloroquine to prevent COVID-19
Next Mirabai twice thought she was clear of COVID-19. But she has just returned a third positive test