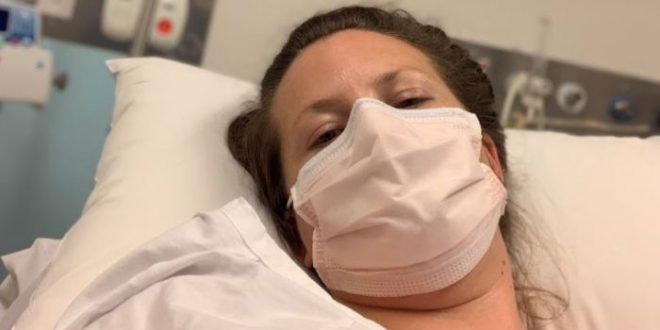 Mirabai twice thought she was clear of COVID-19. But she has just returned a third positive test

Mirabai Nicholson-McKellar felt the first effects of COVID-19 more than two months ago.

She developed symptoms in mid-March after returning from Germany.

She tested positive for COVID-19.

Given the all clear

The 35-year-old Byron Bay filmmaker thought she had recovered and on April 25 she received a letter from NSW Health.

She had gone 72 hours without symptoms and was free to leave isolation.

“It was very exciting,” she said.

“I got to leave the house for the first time in several weeks, and I actually went down to the ocean and had a swim.

“I was fatigued and exhausted, but very excited.”

But three days later, six weeks after the first symptoms, she relapsed and ended up in hospital.

“I had the onset of quite severe chest pain and tightness again,” she said.

“They took another swab test and I tested positive.

“The second positive test was quite disappointing.

“The symptoms, the way they kind of come and go and shift and change, it kind of sends you a bit loopy, like really, is this happening?”

According to data collected by NSW Health, 95 per cent of all COVID-19 cases recovered after six weeks.

Its guidelines state that a patient is considered recovered and free to leave isolation after 72 hours without symptoms.

NSW Health told 7.30 that if a patient tests positive 60 days after being diagnosed, it is possible they are still infectious and, in those cases, it is recommended they remain in isolation.

“One of the most challenging things about this illness, apart from its severity and length, is that there’s so much that we don’t know about it and so it’s a really vulnerable place to be,” Ms Nicholson-McKellar said.

“It’s really such a struggle, with so much unknown and people and doctors and the health profession not being able to answer these questions of when will I recover? When am I going to stop being contagious? Am I still contagious?

After weeks of isolation and feeling mentally on her own, Ms Nicholson-McKellar joined Body Politic COVID Support Group, an international forum for COVID-19 suffers run by Fiona Lowenstein, who has been hospitalised in New York.

“It just feels like it’s been this crazy roller-coaster.

“To hear and share my experience and hear other people’s experiences has been so incredibly supportive.”

After more than two months in isolation, she just wants her ordeal to end.