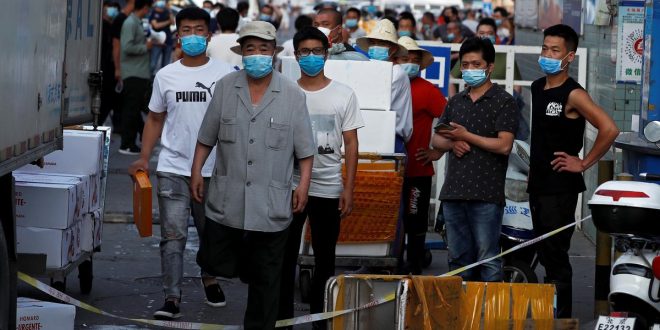 BEIJING (Reuters) – A Beijing district put itself on a “wartime” footing and the capital banned tourism and sports events on Saturday after a cluster of novel coronavirus infections centred around a major wholesale market sparked fears of a new wave of COVID-19.

People are wearing face masks inside the Jingshen seafood market which has been closed for business after new coronavirus infections were detected, in Beijing, China, June 12, 2020. REUTERS/Thomas Peter

Forty-five people out of 517 tested with throat swabs at the Xinfadi market in the city’s southwestern Fengtai district had tested positive for the coronavirus, Chu Junwei, a district official, told a briefing.

None were showing symptoms of COVID-19, he said, but added that 11 neighbourhoods in the vicinity of the market, which claims to be the largest agricultural wholesale market in Asia, had been locked down with 24-hour guards put in place.

“In accordance with the principle of putting the safety of the masses and health first, we have adopted lockdown measures for the Xinfadi market and surrounding neighbourhoods,” Chu said.

The district is in a “wartime emergency mode,” he added.

The closure of the market and new restrictions come as concerns grow about a second wave of the pandemic, which has infected more than 7.66 million people worldwide and killed more than 420,000.

They also underline how even in countries which have had great success in curbing the spread of the virus, clusters can sometimes easily arise.

The entire Xinfadi market was shut down at 3 a.m. on Saturday (1900 GMT on Friday), after two men working at a meat research centre who had recently visited the market were reported to have the virus. It was not immediately clear how they had been infected.

On Saturday, market entrances were blocked and police stood guard. Beijing authorities had earlier halted beef and mutton trading at the market and had closed other wholesale markets around the city.

They plan for more than 10,000 people at the Xinfadi market to take nucleic acid tests to detect coronavirus infections.

A city spokesman told the briefing that all six COVID-19 patients confirmed in Beijing on Friday had visited the Xinfadi market. The capital will suspend sports events and tourists from other parts of China, effective immediately, he said.

Beijing’s Yonghe temple and National Theatre also announced they would close from Saturday, and the city government said it had dropped plans to reopen schools on Monday for students in grades one through three because of the new cases.

One person at an agricultural market in the city’s northwestern Haidian district also tested positive for the coronavirus, Chu said.

Highlighting the new sense of alarm within the city, health authorities visited the home of a Reuters reporter in Beijing’s Dongcheng district on Saturday to ask whether she had visited the Xinfadi market, which is 15 km (9 miles) away. They said the visit was part of patrols Dongcheng was conducting.

And following reports in state-run newspapers that the coronavirus was discovered on chopping boards used for imported salmon at the market, major supermarkets in Beijing removed salmon from their shelves overnight.

That concern also spread to other cities, with a major agricultural wholesale market in Chengdu, the capital of the southwestern province of Sichuan, saying it would remove salmon products from its shelves from Saturday.

In Nanjing, capital of the eastern province of Jiangsu, a local association of restaurants said it would halt the serving of foods containing raw seafood or animal products.

Some Beijing residents, including a man shopping at a Carrefour supermarket in Fengtai district, said they were confident authorities had the situation under control.

“If I were worried, I wouldn’t come here to buy meat. I believe it has been quarantined,” said the man, who gave his surname as Zhang.

Reporting by Judy Hua and Cate Cadell in Beijing, Winni Zhou and Andrew Galbraith in Shanghai; Additional reporting by Martin Pollard and Ryan Woo in Beijing; Editing by William Mallard and Edwina Gibbs

Previous Anti-racism protests to go ahead in Offaly, Longford
Next COVID-19 in Quebec: What you need to know on Saturday | CBC News