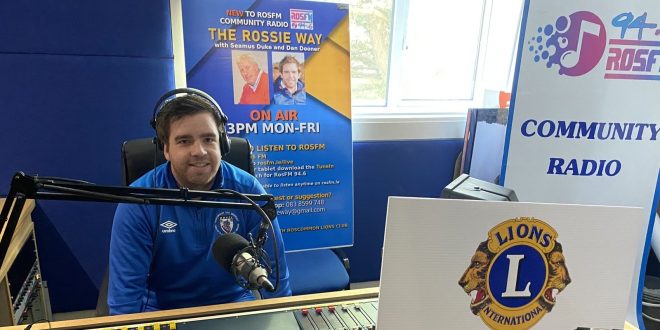 The search for alternative lockdown entertainment and spiritual support on the airwaves during the Covid-19 emergency has left Ireland with dozens of new radio stations and daily broadcasts.

A Lions Club charity group in the west created a new daily community radio show that bans the use of the words ‘Covid-19’ in a bid to cheer up thousands of people cocooned at home or resident in nursing homes.

“We took our inspiration from an 83-year-old Paddy Joe Lynch in Ballinameen” says Kathleen Shanagher, a former President of Roscommon Lions Club.

“When Paddy Joe came home after surviving the virus from the hospital in Sligo he advised everyone of his age to try and ignore the radio and TV news when it comes to Covid-19 some of the time and concentrate instead on the more positive things going on so we created our own new daily show ‘The Rossie Way’ on the community station RosFM and every day we feature everything except the news of the virus.

“We have comedy, sport, religion, gardening, cookery, local history and a daily quiz too – just no Covid-19. We even gave out 100 new radios (donated by Tesco), presenting them to people who did not have their own portable set and now 5,000 listeners listen every day.”

“I love the radio,” said Margaret Byrne from Four Mile house in Roscommon one of the show’s new listeners.

“I live alone and I try not to listen to too much talk of the virus so when the Lions Club and Tesco gave me a new portable set to listen to something different I was delighted to do so.”

Michael Scally, who is a resident at the Innis Ree Lodge nursing home in Ballyleague, Co Roscommon, says he loves the radio.

“We are tuned in to the new show every day. You do hear too much about the Covid on the other stations and to be honest hearing it once is enough for anyone so now I am an expert on cooking and gardening and all the other items covered on The Rossie Way.”

The Rossie Way show on RosFM can also be heard on the Internet through the ‘Tuned In’ app and is presented by two local journalists Seamus Duke and Dan Dooner, who have volunteered their services after finding themselves with time on their hands due to the effect of Covid-19 on the business local newspapers.

“We just wanted to get a positive message out to those people who cannot get out of their house very much,” said Mr Duke. “We were delighted to be able to assist the Lions club.”

The Rossie Way has been supported financially by the Lions clubs of Ireland through their ‘An Post’ fund and is also receiving assistance from Roscommon County Council.

While the Lions club broadcasts on the FM band, a group of out-of-work disc jockeys from Galway and several other counties have set up their own new station online.

‘Lockdown Live’ was the brain child of Benen Tierney from Milltown in Co Galway who says he and a number of fellow DJs found themselves with some time on their hands and funded the new station on their own.

Now, using the latest technology, they broadcast remotely from all over the country every night, playing a wide variety of music genres and broadcasting everything except news and current affairs.

“In fact we ignore news and current affairs ” says Mr Tierney, “and so far the reaction has been wonderful from all over the country.”

The other area of broadcasting that has mushroomed during the last six weeks has been the number of churches broadcasting with daily mass going out to a very appreciative audience on the FM band.

Previous Stranglers keyboardist Dave Greenfield dies with COVID-19
Next Coronavirus in Australia: The next COVID-19 curve the country need to flatten – and quickly