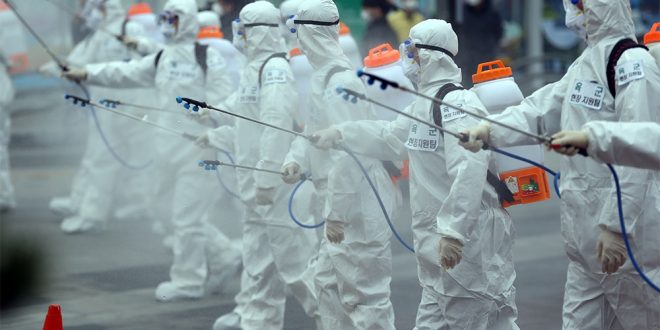 Thailand has become the latest country to report its first death from coronavirus as the outbreak continues to spread around the world with more than 86,000 people infected.

South Korea, which is grappling with the largest outbreak of the virus outside China, has urged citizens to stay indoors, warning of a “critical moment” in the spread of the infection.

This is Mersiha Gadzo in Doha taking over from Hamza Mohamed.

Here are the latest updates:

There have been 12 new cases of coronavirus in the UK, bringing the total to 35, according to British health authorities.

Chief Medical Officer Chris Whitty said in a statement on Twitter that three of those who tested positive were close contacts of a known case.

Six others had recently travelled from Italy, and two from Iran. One patient had no relevant travel, and authorities were investigating how they had caught the virus.

Qatar has confirmed two more cases of the coronavirus, according to the health ministry’s Twitter account, bringing the total number of confirmed cases to three.

The two Qatari individuals were evacuated from Iran on February 27 and have been placed in full quarantine, it said.

Iran has reported 11 new coronavirus deaths. The outbreak has claimed the lives of 54 people, the health ministry said.

“There were 385 new cases of infected people in the last 24 hours, increasing the total number to 978. The death toll is 54,” Kianush Jahanpur, spokesman for the health ministry said.

He called on Iranians to avoid any unnecessary trips and stay at home.

Fears overs the impact of the coronavirus outbreak has hit the stock markets in the oil-rich Gulf countries.

All of the seven exchanges in the Gulf Cooperation Council (GCC), which were closed Friday and Saturday for the Muslim weekend, were hit as oil prices dropped below $50 a barrel.

So far, Gulf states have reported at least 115 cases.

Pollution levels over China have declined significantly, US space agency NASA says, partly due to the economic slowdown following the coronavirus outbreak. 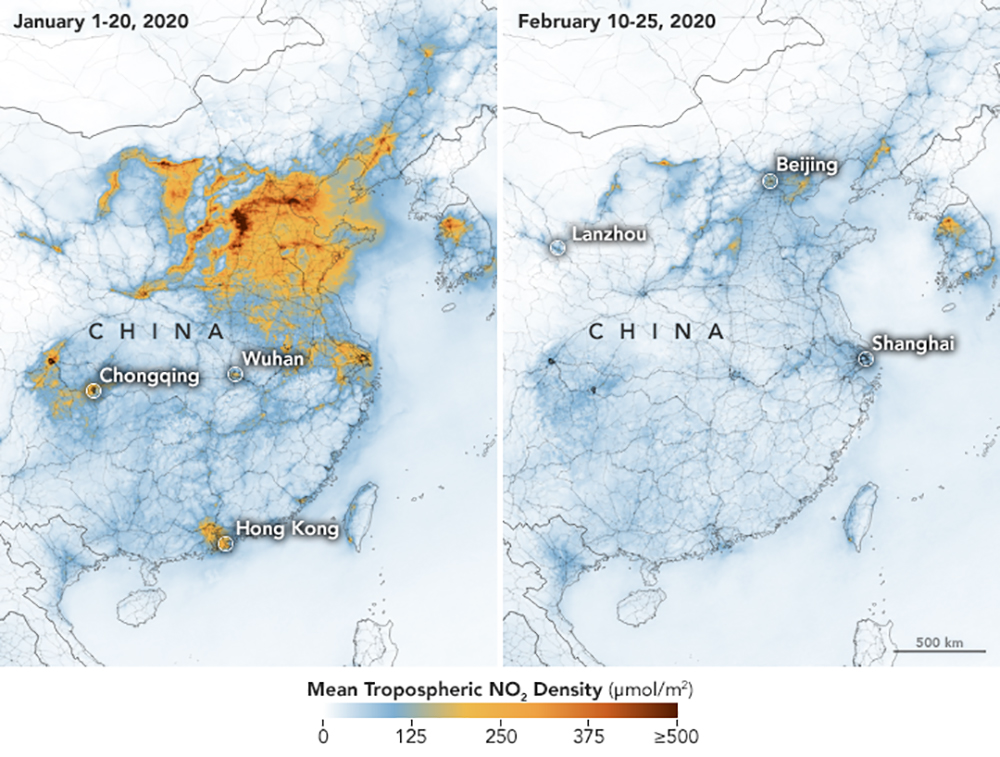 Earlier on Sunday, the Korea Centers for Disease Control and Prevention (KCDC) reported 376 cases and one death linked to the virus.

The country’s total number of infections stands at 3,736.

Meanwhile, a 45-day-old baby has become the youngest person to be infected with the virus, The Korea Times reported on Sunday.

The baby boy tested positive for coronavirus after his parents had contracted the virus, the report added.

Baby and mother, both in self-quarantine, are in good condition according to officials.

07:15 GMT – Pakistan to shut its border with Afghanistan

Pakistan said it will close its border with Afghanistan from tomorrow “to prevent the spread of coronavirus”.

The Chaman border crossing will remain shut for seven days, Islamabad said in a statement.

“During the period, necessary measures will be taken to safeguard the health of the people of both countries,” the statement said.

Afghanistan has reported one case of the virus, while Pakistan has confirmed four, according to the WHO.

A dog has been quarantined in Hong Kong after it tested “weak positive” for coronavirus, officials said.

Churches were closed in South Korea on Sunday, many holding services online instead, according to Reuters.

In the capital, Seoul, about a dozen worshippers were turned away from the Yoido Full Gospel Church, which put a sermon for its 560,000 followers on YouTube, filmed with a small choir instead of the usual 200 members and 60-strong orchestra.

“I had heard there would be no service, but just came to check as I live nearby, but yes, it is so empty,” said one of them, Song Young-koo, as he left South Korea’s biggest church.

“It’s a wise decision to do it online, since the virus would easily spread at mass gatherings and churches can be no exception.”

For the first time in its 236-year history, South Korea’s Catholic church decided to halt mass at more than 1,700 locations nationwide. Buddhist temples have also called off events. 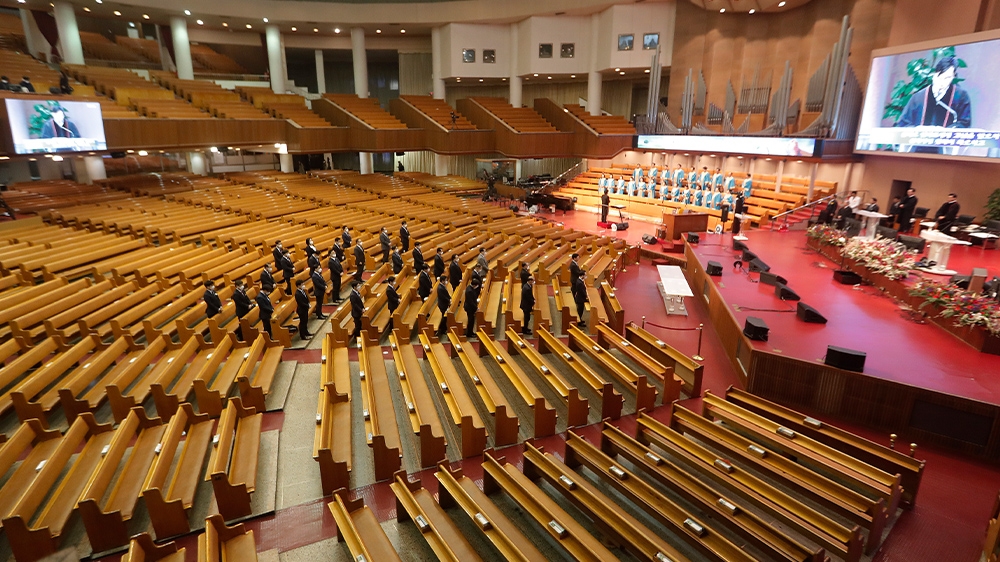 Thailand has recorded its first fatality in the coronavirus outbreak, Reuters reported, citing Suwanchai Wattanayingcharoen, director-general of the Department of Disease Control.

The 29-year-old citizen returned to Armenia from Iran on Friday and went to a doctor because he was feeling unwell, Reuters said, citing Prime Minister Nikol Pashinyan’s Facebook page.

“He is now in good condition,” Pashinyan said, adding that authorities planned to isolate those who had been in contact with him.

Armenia closed its borders with neighbouring Iran a week ago. It has also suspended flights to the country.

Australia said on Sunday that it had confirmed an additional case of the coronavirus, bringing the total number of infections in the country to 26. 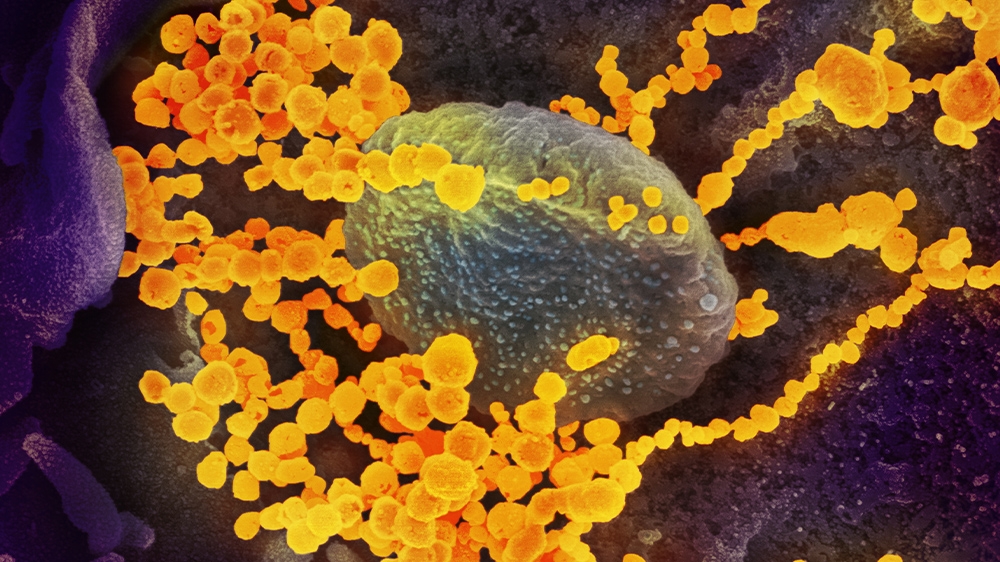 A scanning electron microscope image of SARS-CoV-2 (the round gold objects) emerging from the surface of cells cultured in a lab from a patient in the United States. SARS-CoV-2, also known as 2019-nCoV, is the virus that causes COVID-19. [National Institutes of Health via EPA]

American Airlines said it would suspend flights from New York and Miami to Milan because of a “reduction in demand”.

Flights are scheduled to resume on April 25, the airline said in a statement on its website.

Australia has recorded its first death from the coronavirus after a 78-year-old man who had been evacuated from the quarantined Diamond Princess cruise ship died in a Perth hospital.

“Our condolences are with his family and unfortunately he’s the first death we’ve had from coronavirus in Australia,” Andrew Robertson, the chief health officer of the state of Western Australia, told journalists, according to Reuters.

The man’s wife also caught the virus, but is in stable condition, authorities said.

Australia has reported 25 cases of coronavirus. 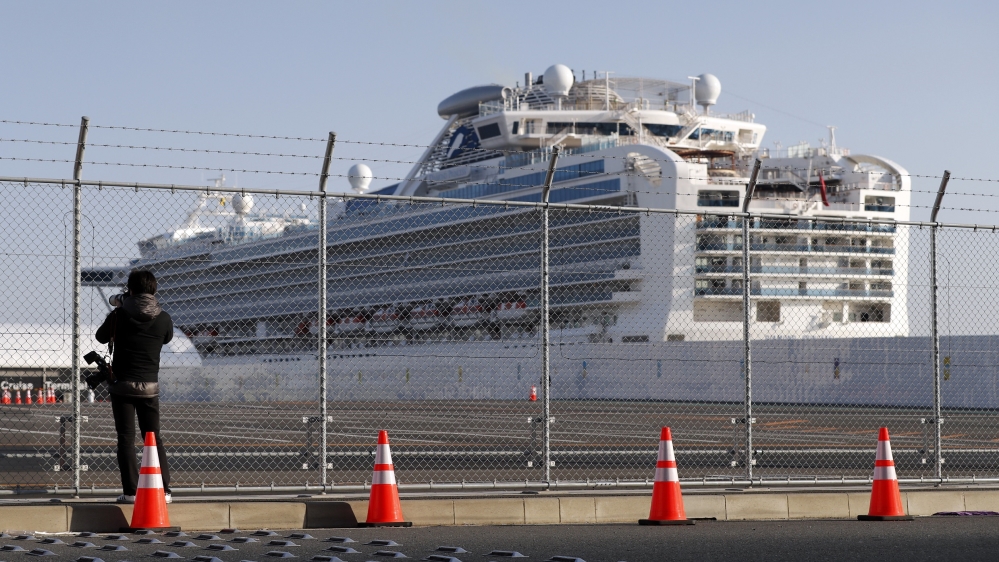 The first Australian to die of COVID-19 had been evacuated from the Diamond Princess cruise ship, which was quarantined in Yokohama, Japan [Eugene Hoshiko/AP Photo]

The Korea Centers for Disease Control and Prevention (KCDC) said 376 more cases of coronavirus had been reported in the country, most of them in the hardest-hit city of Daegu and the province of Gyeongbuk.

No new deaths were reported.

The KCDC will release a further update at 07:00 GMT on Sunday.

The number of deaths stood at 35, down from 47 the previous day, bringing the total death toll in mainland China to 2,870.

Of the deaths, 34 were in Hubei province, the epicentre of the outbreak. The province also saw 570 of the new cases.