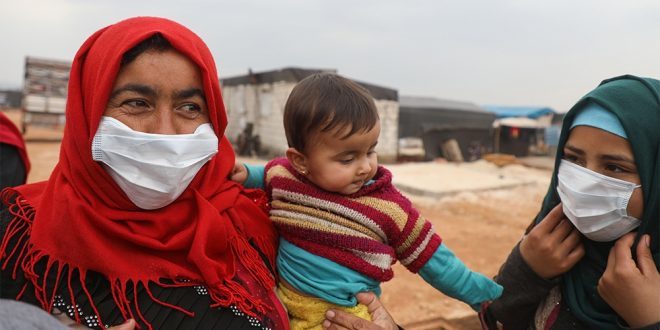 As the coronavirus takes a firmer hold across the Middle East, there is growing concern that Syria might face a major outbreak – a “catastrophic” prospect in a country ravaged by nine years of war.

Amid conflicting reports about the spread of the virus on Syrian territory, medical professionals Al Jazeera spoke to expressed doubt that the country’s weak healthcare system – already devastated by the conflict – would be able to cope with COVID-19, the highly infectious respiratory disease caused by the virus.

So far, there have been no officially registered cases of the virus. Mohammed Isa, a COVID-19 response advisory member of the Syrian American Medical Society (SAMS), which works on the ground in opposition-held northwest Syria, told Al Jazeera that there have been no confirmed cases in the area.

At a press conference in Damascus on Saturday, Syrian Health Minister Nizar Yazigi said all tests of suspected cases in government-controlled territory have been negative, according to SANA state news agency. Yazigi added that 16 Syrian passengers and crew members from a flight from Iraq had been put under quarantine in an isolation facility near the capital.

On Friday, the education ministry announced it was shutting down schools and universities as a precaution, while religious authorities suspended Friday prayers and sermons.

Isa, meanwhile, said opposition groups had tried to limit the movement of people at two checkpoints at the frontline in northern Syria, fearing that infection could come from government-held areas.

On March 1, the local authorities in northeast Syria, controlled by the Kurdish-led Syrian Democratic Forces, closed down the Semalka border crossing with Iraq over outbreak fears.

The World Health Organization’s office in Damascus said in an email to Al Jazeera that “WHO did not receive any official report from the [International Health Regulations] focal point about confirmation of cases in Syria. However, WHO assesses the risk is very high in Syria.”

It added: “The government of Syria is working with the available capacities which is not at all matching countries which are not under conflict.”

The Syrian government’s capacity to cope with an outbreak has been “heavily impacted” by nine years of war, with only 50 percent of public hospitals being fully functional, according to the WHO statement.

Despite repeated denials by the Syrian government, there have been reports about the spread of the virus in areas under its control. On March 10, the Syrian Observatory for Human Rights reported that there have been outbreaks of COVID-19 in Tartous, Damascus, Homs and Latakia provinces. According to the UK-based monitor’s sources, a strict gag order has been issued to forbid medical personnel from discussing the issue.

Reports of COVID-19 infections have also circulated on social media and  news outlets  and have been attributed to continuing travel between Syria and Iran, the regional epicentre of the outbreak. Syria is one of the few countries in the region which has not stopped flights to Iran, which has registered 14,000 confirmed cases and more than 700 deaths from the coronavirus. ‘There is great fear’

Three residents of Latakia province, who all spoke to Al Jazeera on condition of anonymity, said they believed there were people infected with COVID-19.

“There are [coronavirus] cases and deaths in Latakia but the state would not acknowledge,” said an aid worker who lives in Latakia and who has been briefed by medical staff working in government hospitals.

“[The doctors] may see this, people may die from it in their hands, but they would not dare say ‘corona[virus]’ publicly.”

A doctor who practises in the province also said he believed COVID-19 infections were currently being treated in public hospitals.

“[The virus] is there, but the capacity to determine it is limited,” he said. “In general, it is the season in which viruses spread. We have a lot of cases, influenza and others, and we cannot determine if it is corona[virus] or not.”

The doctor said serious preventative measures had not been taken by medical personnel, including himself.

The health ministry has not released numbers of how many tests it has performed. During the Saturday press conference, the health minister said masks and special protective outfits were being distributed to ensure medical staff are protected, SANA reported.

But rumours over the spread of the coronavirus have caused alarm among Latakia residents, a pharmacist who works in the province told Al Jazeera.

“There is great fear among citizens about this epidemic and everyone knows that the government will not acknowledge any infections, so they [have no information] on how to protect themselves except from social media,” she said.

“The government does not have the capacity to cope with this epidemic. It has neither the cadre nor the infrastructure to do so,” the pharmacist said.

“There have also been shortages of medicines, from even before the epidemic. After the collapse of the lira, a lot of medicines, including imported, disappeared even it if they were abundant before. And in this epidemic, God help us!” she said.

Last year, the Syrian lira lost more than 100 percent of its value against the US dollar, causing high inflation and a significant rise in the prices of basic goods, including food.

Another doctor who did not wish to give her name told Al Jazeera that the healthcare system in Syria was “bad” even before the war.

“There was no capacity to contain outbreaks. [After the war], the situation got even worse. Many doctors left. The war made working conditions much worse for doctors,” she said. The paediatrician, who is now based in the Turkish town of Antakya, near the Syrian border, expressed concern about a possible outbreak in opposition-controlled northwest Syria.

“It would be a catastrophe. It would spread in the whole region because of the lack of capacity to contain an epidemic, the overcrowdedness of camps, the inability of the hospitals to treat a large number of infected people and the lack of aid to support them,” she said.

Between December and early March, the escalation in fighting between Syrian government forces, backed by Russia and Iran, and the Turkish-backed opposition displaced close to one million people in northwest Syria, according to the UN. Aid agencies have been unable to respond to the overwhelming surge in new arrivals at camps which has forced many families to share their tents.

Isa also said that if the virus makes its way to these camps, it would be “catastrophic”.

“One of the most important measures to stop the spread of the virus is to prevent large gatherings of people. But in northwest Syria, about half of the population lives in camps, in which two-three families share one tent. Isolation [of infected people] is simply not possible,” he said.

“If there is infection, it would spread fast and infect many people.”

Isa explained that the recent fighting further diminished the capacity of local hospitals to provide adequate care. About 50 health facilities had to close down because of the advance of the Syrian government forces and only 31 could be relocated and reopened, he said.

“The capacity is completely inadequate for [an outbreak]. There are not enough supplies,” he said.

Apart from testing kits, which still have not arrived to northwest Syria, doctors there lack protective gear to work in highly infectious environments. There is also a shortage of intensive care units and undersupply of medicine as well, Isa said.

SAMS, the WHO and several other organisations have formed a task force to try to prepare clinics and hospitals in Idlib to respond to a possible outbreak.

However, Isa worries it will not be enough.

“Italy, with its developed healthcare system, is not able to contain the outbreak. So imagine [what would happen] in an area with a devastated healthcare system that cannot provide proper care … It would be a true catastrophe,” he said.