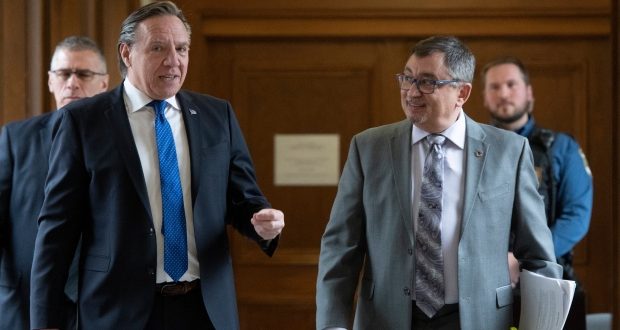 The province also announced a daily increase of 892 new COVID-19 from Saturday, bringing the total number of infections in Quebec to 31,865.

Sixty-nine people have died of the virus in the last 24 hours, which brings the total number of deaths to 2,205.

Health officials said the 1,317 missed cases in April were mainly from Montreal, Laval and the Monteregie regions.

However, offiicials announced just 16 more people in the hospital than the 1,738 reported Saturday, and four less people were in intensive care than there were Saturday for a total of 218.

The new numbers come as Quebec gets ready to reopen retail stores in regions outside of Montreal, and take down checkpoints in some regions.

Premier Francois Legault has set May 11 as reopening day for schools and daycares outside greater Montreal. The city is to follow suit on May 19, but attendance won’t be mandatory. High schools, junior colleges and universities are to stay closed until September.

Quebec aims to open retail stores outside Montreal by May 4 while those in the greater Montreal region are to reopen May 11.

Lottery terminals are to begin reopening on May 4 after being shut down on March 20 with sales moving to online only.

The construction industry is set to completely start up May 11, while manufacturing companies are to resume operations the same day with initial limits on the total number of employees who can work per shift.

With reporting from The Canadian Press.

Previous São Paulo’s favelas are running out of food. These women are stepping in.
Next 6 more COVID-19 deaths, all at Northwood, bring N.S. death toll to 37 | CBC News