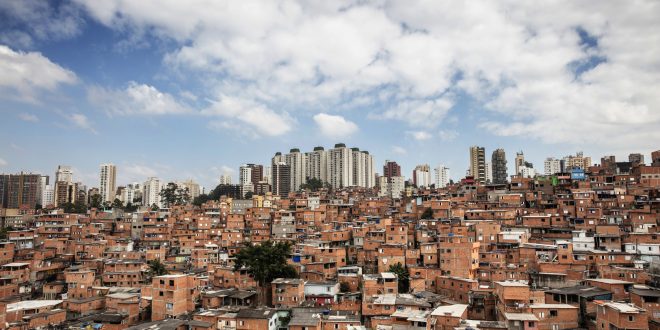 São Paulo’s favelas are running out of food. These women are stepping in.

Tatiana Bernardo de Nascimento, 27, holds out her hands so the young couple delivering meals at her door can spray them with sanitizing alcohol. There’s no soap and the taps often run dry in her home in Paraisópolis, a working-class community of more than 100,000 residents that constitutes one of the city’s many favelas, or informal settlement neighborhoods.

Nascimento’s husband lost his job as a welder at the end of March, just before São Paulo was put under quarantine in an attempt to prevent the spread of the novel coronavirus. The couple, their three small children, and Nascimento’s brother (who lives with them) are now without income.

Even before the world was gripped by a pandemic, Nascimento and her family were facing extreme hardship, along with the other residents of Brazil’s favelas, which number in the thousands. Running water, gas for cooking, and sufficient food to make nutritious meals have become luxuries; access to formal housing, health care, and stable employment are often out of reach.

Now, failures in the country’s social health systems are making it nearly impossible for favela residents to follow public health recommendations meant to slow the spread of the coronavirus, which makes these communities especially vulnerable to infection.

Nascimento worries about her mother, who was told not to leave the house by doctors after they suspected her dry cough and fever could indicate COVID-19. With little help on offer from the government, Nascimento was concerned about feeding her family of six until a neighbor told her about the Paraisópolis Women’s Association, a community organization established in 2006 to support women and their families; the association is now cooking and delivering meals to Nascimento and other residents like her.

“Without the help of our community, we would be left with nothing,” Nascimento says, standing in the doorway of her cement-block home, tucked away in the corner of a narrow alleyway.

“But I’m afraid of what will happen when people stop sending donations. What will we do when they forget about us again?”

A housing crisis meets a pandemic

Brazil has a housing deficit of 6.3 million homes, according to a study conducted by the João Pinheiro Foundation, an office of the secretariat for planning and management of the government of Minas Gerais—a state neighboring São Paulo.

“In China, [COVID-19] spread within households was one of the major forces that propelled ongoing transmission of the virus,” says Carolyn Cannuscio, a social epidemiologist at the Hospital of the University of Pennsylvania. “In a favela, if many people are occupying a small home, the risks are incredibly high for transmission within the household.”

Matriarchs are typically the heads of households in favelas. A study conducted in late March by Data Favela and Instituto Locomotiva reports that 92 percent of the 5.2 million mothers living in Brazil’s favelas would have difficulty buying food after losing one month’s income. The gravity of this finding is amplified by the fact that 80 percent of those surveyed said they have already lost income due to the self-isolation mandated to slow the spread of the coronavirus.

Maria José de Jesus Silva, a 26-year-old mother of two, who is six months pregnant with her third daughter, is concerned about her family’s tight quarters and their ability to wash their hands. Her children, husband, aunt, and cousin share a three-room house in Paraisópolis.

“We try not to get too close to neighbors, we stay away from friends, but there’s no way we could stay away from each other,” she says. “What if one of us gets sick? Where would we go?”

Hardship and scarcity in favelas

Access to adequate health care, stable employment, and even clean water is also scarce in Paraisópolis.

In an effort to support the community’s already overtaxed public clinics and emergency rooms the local residents’ association has set up field hospitals in empty schools; these are helping keep people with mild symptoms in isolation. Because emergency vehicles from the city’s public health system take hours to arrive—if they enter the favela at all—the group has used donated funds to rent three ambulances to serve the community.

Silva’s husband, Fernando Edson Fernandes, had just completed his service with the Brazilian army and was looking for a job when the quarantine was announced. Her cousin, Raine Santos da Silva, was laid off from her telemarketing job at a medical clinic shortly before the lockdown. Fernandes’s last army payment, which will come in May, will be the family’s only income. They are all looking for work.

For now, they crowd around the table in their tiled kitchen, sharing buttered bread and coffee for breakfast. Silva tries to keep her two girls, six-year-old Erlane and eight-year-old Edilaine, busy while they’re out of school by giving them math and Portuguese language activities to do. Other times, the girls play with their favorite dolls, two smiling cloth ballerinas in pink tutus.

When Silva first heard about the coronavirus in January while watching the news, she worried that the disease would eventually reach Brazil; she bought hand sanitizer for her daughters to bring to school.

“We’re used to getting diseases here, and I’ve seen how they can spread fast,” Silva says, referring to outbreaks of viruses such as Zika, dengue, and measles that the country has seen recently. “I wanted to make sure we were prepared. I wanted to make sure my daughters were safe.”

But the girls used the last of the hand sanitizer a couple weeks ago, and the soap in their house is starting to run low. Water runs from the tap in their kitchen sink, but they’re never sure when it will be turned off. When that happens, often in the evening before dinner, it doesn’t come back on until morning.

According to Brazil’s National Water Agency, some 40 million people in the nation do not have access to the public water supply and roughly 100 million are not connected to sewage treatment. Many residents of Paraisópolis live with open sewers running under and around their homes, which presents a potential risk. Preliminary studies have indicated that coronavirus can survive in wastewater, though it is unclear if people are catching the disease via this route.

Even those who do have regular access to water often have just one sink in their homes.

“In the majority of houses in favelas, one of the biggest difficulties is being able to separate areas where you prepare food and do dishes from areas where you wash clothes,” says Tainá de Paula, a social architect and president of international relations at the Institute of Architects of Brazil. “So, it’s really difficult to ask someone who lives in a favela to comply with these rigid methods of hygiene during this type of crisis.”

While the government has not created a favela-specific plan to protect residents from the spread of COVID-19, São Paulo’s water and waste management company, Sabesp, has started to distribute 1,200 water tanks to Paraisópolis residents. It’s not nearly enough for the community, but for those who have managed to get their hands on one it will make all the difference.

“We didn’t have a water tank at all before this one,” says Marcone Francisco da Silva, who lives with his wife and mother. He smiles as he carries his new tank down the main stretch of Paraisópolis and back to his home. “Now we’ll be able to wash our hands so much more.”

To help with food shortages, the Paraisópolis Women’s Association ramped up meal production at its bistro, Mãos de Maria (Maria’s Hands), which provides work for women in the community. By late April, the association was making 6,000 meals a day, using hundreds of kilograms of rice, meat, beans, vegetables, and pasta that were donated or purchased with money from an online crowd-funding campaign. The association has since moved its operation to a larger kitchen and expects to increase its production to 10,000 meals a day.

“It seems like a big number, but for a community with 100,000 residents, it’s really not,” says Elizandra Cerqueira, president of the Paraisópolis Women’s Association. “There are so many more who need our help.”

The young couple who made the meal delivery to Nascimento’s family, Maria Angelica de Araújo Costa and Pedro de Araújo Teixeira, live in this part of Paraisópolis, too. They were eager to volunteer, despite the personal risks.

“We’re a community,” Costa says. “We have to do everything we can to help. We have to take care of each other.”

Previous How to measure your nation’s response to coronavirus
Next Confirmed COVID-19 cases in Quebec near 32,000 after missing April data found