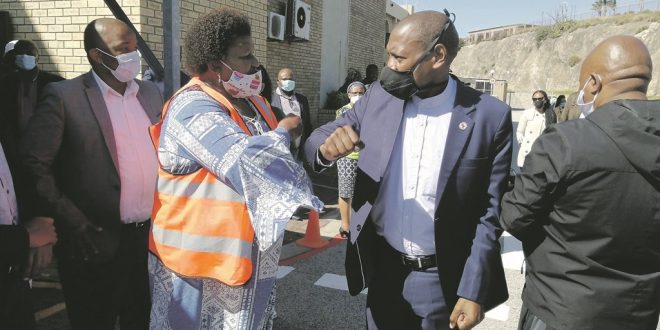 The number of people who travelled from the Western Cape to the Eastern Cape during the inter-provincial grace period that have tested positive for Covid-19, has jumped to 137 from 80.

She said the travellers had entered the provincial borders through Tsitsikamma and Aberdeen during the grace period for inter-provincial travel between 1 May and 7 May.

This had contributed to the province’s number of confirmed cases climbing to 1 078 as of Saturday night, she said.

Gomba revealed that the majority of the new positive cases were in the OR Tambo, Buffalo City, Amathole and Graaff-Reinet municipalities.

“Teams are now tracing and tracking their contacts using the newly handed over 4×4 bakkies, as those in Graaff-Reinet had also attended a funeral.”

The MEC had previously raised concern over funeral services, which she deemed the worst spreaders of the virus.

Gomba said the rising number of positive coronavirus cases in the province was a cause for concern.

While concerned about the number of confirmed cases and deaths, there has also been some good news, Gomba said. This came as the province recorded 519 recoveries. Gomba attributed this to a dedicated team of health workers.

The issue of people moving from the Western Cape to the Eastern Cape has even created tensions between the ANC- and DA-led provincial governments.

‘We are calling on people to be responsible citizens’

Gomba said: “Because we cannot get to everyone who recently travelled from other provinces at the same time, we are calling on people to be responsible citizens and contact our 24-hour call centre on 08000 32364 so that they can be screened and tested if they have any of the symptoms consistent with Covid-19.”

She added: “We need everyone to play their part because people’s lives are at risk. If we all get infected by the coronavirus at the same time, our healthcare system will not cope and it will result in more deaths than could have been prevented,” said Gomba.

The MEC sent her condolences to the families, friends and loved ones of the 21 people who have died in the province due to Covid-19.

“We feel their pain as this affects all of us. May their souls rest in peace.”

She revealed that there has also been a confirmed case at a retail store in Port St Johns.

Teams were following up in this case, she said.

She also announced that 110 people who were under quarantine in Mpekweni and Fish River in Port Alfred had been given a clean bill of health.

She said her department’s main priority is to stop the spread of the virus and for them to successfully do that, people need to stay at home, practise good personal hygiene by washing their hands with soap and water or sanitiser regularly. She also urged the public to practise social distancing and wear masks when going out to buy essentials or get medical help.