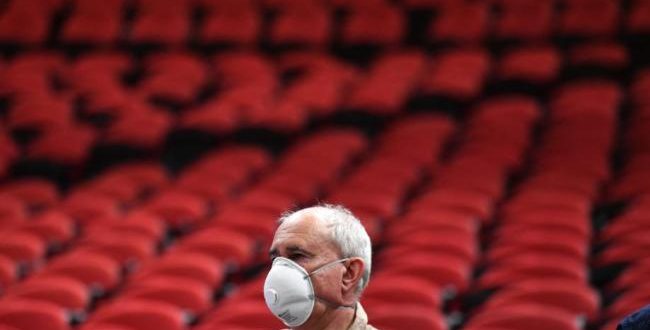 “A lot of meetings but I can tell you I am feeling fine,” Mr Morrison said. “There is a lot of work to do, and everyone is working well together.”

Home Affairs Minister Peter Dutton on Friday announced he had tested positive for coronavirus and was going into isolation.

Mr Dutton had attended a cabinet meeting with Mr Morrison and a number of key ministers in Sydney on Tuesday but the PM’s office said they would not need to self-isolate.

Speaking on Sunrise, Mr Morrison was asked how the government would enforce the 14-day isolation rules for people entering the country.

He said self-isolation had been voluntary until now and “Australians have been following the rules, and now they will be backed up by the force of state and territory laws”.

Mr Morrison defended his confused messaging last week, when he first said he was going to attend the footy before backtracking. “We are acting on medical advice, that is always what we are doing,” he said.

Kochie asked a good question – if people returning from overseas are required to self-isolate, what does that mean for taxi drivers, Uber drivers or anyone who drives them home from the airport?

“Anyone presenting with symptoms or things of that nature, they will be issued with protective equipment. The advice on testing is clear – you have to be in contact with someone that had symptoms or 24 hours before they had symptoms, and you are showing symptoms yourself. That is the clear medical advice.”

Queensland Premier Annastacia Palaszczuk has warned of the heavy financial penalty that awaits any person who arrives from overseas and does not self-isolate.

From midnight all people coming to Australia will have to self-isolate for 14 days, while cruise ships will be banned from arriving at Australian ports for an initial 30 days.

Ms Palaszczuk said on Sunday that laws were in place to deal with those who fail to follow a direction to self-isolate.

“In relation to legislation around that … it’s under our Public Health Emergency Act,” she said.

“That bill was passed in early February and there are penalties for not complying with the notification and that is around $13,000,” she said. “We have random police checks to make sure people are compliant with that notice.”

The warning came as Queensland had its biggest single-day jump in coronavirus cases, taking the number of people detected with the COVID-19 to 61.

There were 15 people confirmed on Sunday as having contracted the virus.

People were also being discouraged from kissing, hugging or even shaking hands.

“We are asking Queenslanders, when you are out and about no hand shaking … and no kissing or hugging in public. Let’s all minimise the risk,” the premier said.

Queensland’s chief health officer warned that now may not be the time for children to visit their grandparents.

“I implore people if you have parents … or grandparents in that older age group think about how you can help them. Maybe it’s not the time for your young kids to see their grandparents,” she said.

The hearings were scheduled for the Regional and Rural Affairs and Transport Committee from Monday through to Thursday.

Victoria’s museums and art galleries will be closed indefinitely in an effort to contain the coronavirus and protect those most at risk.

“It is my deep belief that the gallery is a place for everyone and when we reopen we will ensure that the gallery continues to be a welcoming and inspiring place for the community,” NGV director Tony Ellwood said in a statement on Sunday night.

“In the meantime, we will do our best to offer the community access to the State NGV Collection virtually, much of which is available online, where our audiences can still benefit from one of the world’s best collections of art and design.”

Mr Ellwood said both NGV International and NGV Australia will reopen on April 13.

Museums Victoria earlier made the decision to temporarily close all its public sites, including Melbourne Museum, Scienceworks, Immigration Museum and the Royal Exhibition Building, effective immediately.

Chief executive Lynley Crosswell said the safety and wellbeing of the community, staff, visitors and volunteers was the organisation’s top priority.

“We are taking these steps as a public health precaution in support of measures to contain novel coronavirus, especially for those in our community who are most vulnerable,” she said in a statement posted online on Sunday.

“We are committed to providing support for our employees and volunteers and to protecting our community during these unprecedented and challenging times.”

Woolworths is introducing a new dedicated shopping hour for vulnerable customers in response to the coronavirus panic.

From tomorrow until at least Friday, Woolworths supermarkets will be open exclusively to the elderly and people with disability between 7am and 8am.

Access to the store during this time will require a relevant government-issued concession card.

We’re launching a dedicated shopping hour in our stores to help support the needs of the elderly & people with disability in the community. From tomorrow until at least friday, we’ll be opening exclusively for them to shop from 7-8am, where permitted.

“While we’ll continue to do our very best to restock our stores during this period of unprecedented demand, we know many of our elderly customers have been missing out on essential items when they shop,” Woolworths Supermarkets managing director Claire Peters said.

“This temporary measure will give them, and those with a disability, the opportunity to shop before ​our stores officially open – helping them obtain the ​essential ​items they need most in a less crowded environment.”

Ms Peters urged Australians to be mindful of “those in our communities who might need extra help at this time”. “Now more than ever we need to be kind to each other, especially to those most vulnerable,” she said.

“We’d like to thank our customers for their patience and apologise for any inconvenience caused by the revised opening hours.”

Last week, Woolworths announced it was working with Meals on Wheels in NSW to help deliver toilet paper directly to the community.

The Mercury reports the latest case is a woman in her 50s and is a close contact of a previous Tasmanian case who had recently travelled overseas.

That brings the national total to 298.

Victorian authorities are recommending the public have a two-week stockpile of food – but no more – in preparation for a major coronavirus outbreak in the state.

As the number of Victorian’s diagnosed with COVID-19 rose to 57 on Sunday, Premier Daniel Andrews said it would be “sensible” to have extra staples on hand as the number of cases of COVID-19 rises.

But he warned against panic buying as it would impact those “most at risk of being quite seriously ill”.

“It is sensible to try and have some of those (staples) on hand, more than you would normally have,” Mr Andrews told reporters on Sunday.

“But if everybody goes out and buys not two weeks worth of staples but two months worth, the shelves will be empty and the only people who suffer then are vulnerable people who might not have got to the shops, or can’t go to four different supermarkets and get the basics that they need.”

Mr Andrews said the state government had been creating care packages for individuals and families in isolation.

The state’s Chief Health Officer Brett Sutton on Saturday advised people to consider having a fortnight’s worth of non-perishables in their pantries as well as a 60-day supply of prescription medication.

“That does not mean stockpiling – but planning sensibly as you shop,” he wrote in the Herald Sun.