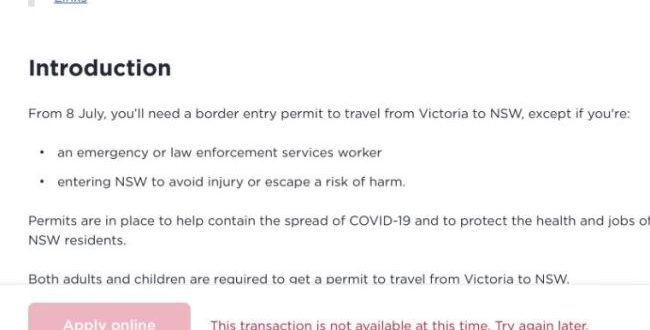 The Victorian government has accused of allowing a “catastrophic bungle” to unfold in the state.

“How could you blame Victorians yesterday for the outbreak when it was your government’s decision to employ an incompetent private security force to guard those in quarantine?” Today host Karl Stefanovic asked Premier Daniel Andrews this morning. “That’s an unbelievably catastrophic bungle right at the front door.”

“It’s not about blaming Victorians,” Mr Andrews responded. “But all of us have a part to play and all of us have to be focused on those things we can influence.”

Albury City Council Mayor Kevin Mack said it was a “disgrace” that every car was being stopped at the NSW-Victoria border.

“This is not Sydney, this is Albury-Wodonga and people just aren’t being treated like they should be treated here,” he told 2GB.

NSW Police Commissioner Mick Fuller said he is happy with how the border closure operation is being conducted.

“I think it’s ridiculous to come out day one on such a large border operation and make complaints,” he said.

“Perhaps he needs to go down and talk to the police who have been working through the night in freezing conditions, protecting the health of the people of NSW.

A man working with a youth charity was arrested outside a locked-down public housing tower in Flemington, Melbourne, just before 10pm on Tuesday night while trying to deliver food to residents.

Dramatic vision of the arrest shows police swarm the man and bring him to the ground, before he yells “I can’t breathe”.

The scuffle was one of many that took place after charity volunteers argued with police outside 12 Holland Court, where residents have been unable to leave their homes since Saturday.

Australasian Mercy Secondary School Association Youth Connect arrived just after 9pm with packed groceries for residents. Volunteers claim they waited around for about half an hour before deliveries were able to begin, and the fight broke out shortly after.

Counsellor Tigist Kebede filmed the incident, and is heard yelling for the man to be let go as they scuffle with police.

Moments later, three officers appear to tackle him to the ground, causing Ms Kebede’s calls for peace to become more panicked and desperate.

Residents trying to cross the border between NSW and Victoria are facing significant delays this morning, with drivers spending almost an hour in traffic for what is usually a five-minute trip.

Most of the drivers are Victorian workers trying to get to work via Albury, but there are massive queues due to police checkpoints.

Victoria and NSW agreed to shut the borders between the two states last night.

Special permits are being been issued for those who need to travel interstate for work or health reasons.

Woolworths has just reinstated a purchase limit of two items per customer across 27 product categories in Victoria both in-store and online, following a surge in demand.

The limit will apply to the following:

• Pre-packed Sausages from the meat department

• Pre-packed Burger Patties, Rissoles and Meatballs from the meat department

Toilet rolls will also remain limited to two per customer.

Today host Karl Stefanovic accused the Victorian government of being responsible for a “catastrophic bungle” that allowed the virus to spread through the state.

“How could you blame Victorians yesterday for the outbreak when it was your government’s decision to employ an incompetent private security force to guard those in quarantine?” he asked Premier Daniel Andrews. “That’s an unbelievably catastrophic bungle right at the front door.”

“It’s not about blaming Victorians,” replied Mr Andrews. “But all of us have a part to play and all of us have to be focused on those things we can influence.

We all have to follow the rules. That’s not about blaming anyone. It’s simply about properly explaining to people the circumstances we’re in and the next steps that we have to take.

“What’s gone on is unacceptable. To me. To everybody. But I can’t change that. All I can do is make the tough calls now to keep Victorians safe and to get us to the other side of this.”

Asked when their lockdown will end, he said: “We’re making great progress going door-to-door testing each and every one of the residents.

“As soon as I have the results then the aim is to have them in the same position as the rest of Metropolitan Melbourne.”

When Today host Karl Stefanovic asked the Premier to “level with people about what happened in quarantine”, he replied: “That’s exactly why there’s an independent inquiry.”

“You know the answers already. You have fixed the breaches presumably,” replied Stefanovic.

“The most important thing for us to do is not have politicians investigating themselves but to have a proper arm’s length process,” Mr Andrews replied. “We have a retired judge doing that work. That’s really important.

“What will happen in the weeks and months ahead is that she will do her work and it will be without fear or favour and that report will be there for all of us to look at.”

Victorian Premier Daniel Andrews said he feels the pain of forcing his state into a harsh second lockdown.

“No one wanted to be in this position,” he told Today. “People are furious. I’m furious, but we can’t change what has occurred. We simply have to respond to our circumstances. This is a tough measure. But this will pull it up, we know this will work. But only if all Victorians stick together and stay the course on this.”

Treasurer Josh Frydenberg said Victoria’s second lockdown poses a real risk to the nation’s economic recovery, stating that the move could cost about $1 billion a week.

“When I made a statement to the parliament in May I talked about the economic cost of a lockdown being about $4 billion dollars a week, and given that Victoria is about a quarter of the national economy, then you’re talking about an impact of around a billion dollars a week for the Victorian economy alone, which is very significant,” he told The Australian.

In May, Mr Frydenberg told the National Press Club the economy would suffer a $4 billion hit for every extra week the lockdowns remained in place.

Asked if he would consider extending the JobSeeker and JobKeeper payments, Mr Frydenberg said he would flag “providing further income support for those who need it” when he delivers his mini-budget on July 23.

A social influencer who was given a $1000 fine by police for escaping hotel quarantine in Sydney has said she’ll challenge the fee and just wanted some fresh air.

Podcaster Sarah Liberty, 39, arrived back in Australia from Paris last week and was forced to spend 14 days in quarantine. But she said the lack of a balcony in her room triggered her anxiety and she escaped.

On Tuesday she spoke to Ten News about her decision, saying “people calling me selfish, I think that’s really unfair because they don’t understand my character.”