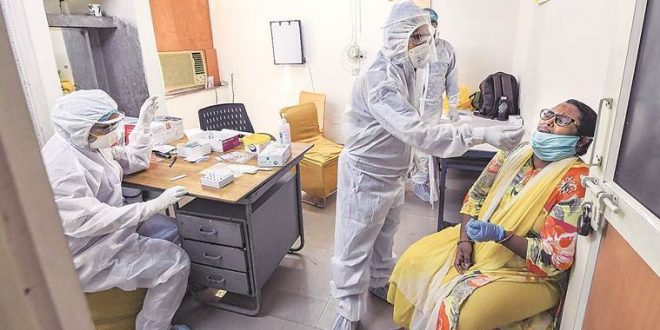 Haryana has emerged as a concern as it is the fastest-growing in India’s 10 most affected states. Bihar, on the other hand, offers a glimmer of hope as its cases have slowed down. The total number of active COVID patients in Haryana were yet 4,538, while the state ramped up its testing to 8,000 tests per million population.

Meanwhile, 22 trial sites in the country will stop the hydroxychloroquine (HCQ) arm of the Solidarity Trial to find an effective Covid-19 treatment following the WHO’s announcement that the drug was futile in reducing mortality in hospitalised coronavirus patients. More than 3,500 patients had been enrolled from 21 countries, including India, for the trial.

Tamil Nadu on Friday reported 2,115 fresh coronavirus cases and 41 more deaths taking tally to 54,449 while the toll stood at 666, the government said. Of the 2,115 cases, Chennai’s accounted for 1,322 and the state’s total count of cases stood at 54,449 while the capital city’s share in the aggregate number was 38,327. Today is the third successive day of 2,000 plus cases in the state. Those dead include 31 with comorbidities and people without any concomitant illness include a 40-year old man. The active cases are 23,509 and as high as 1,630 people gotdischarged in a single day today from various hospitals in thestate and in total 30,271 have recovered.

The Delhi government on Friday issued a statement needing the support of NGOs, CSOs, individual volunteers, NCC, NSS cadets etc for survey of suspected Covid-19 cases in Delhi. Taking to twitter chief minister Arvind Kejriwal said, “Delhi will fight Corona together. I appeal to all NGOs and individuals to join in this effort on a large scale.”

Delhi will fight Corona together. I appeal to all NGOs and individuals to join in this effort on a large scale. pic.twitter.com/u7675fYKGH

The medical condition of Delhi Health Minister Satyendar Jain deteriorated Saturday afternoon after he developed a lung infection during the ongoing treatment for Covid-19 at Rajiv Gandhi Super Speciality hospital. He is being shifted to the ICU of Max Super Speciality Smart hospital in Saket, said a government source.

“He faced difficulty in breathing and during the CT scan, it was found that the pneumonia patch in his lungs has widened. His condition is slightly critical,” said a source in the Delhi government.

Jain, 55, was admitted to the government-run Rajiv Gandhi Super Speciality Hospital on Tuesday after he developed breathlessness, fever and a drop in oxygen levels had tested negative for the virus, but as his symptoms persisted, he was tested again. He was tested positive on Wednesday.

The Ministry of Home Affairs on Friday updated quarantine rules for the UT and ended home isolation for covid-19 positive patients. It has now mandated five days of official quarantine at government allotted centres.

MHA sources confirm Delhi has been instructed to make five days institutional quarantine compulsory for all testing +ve for #Covid_19. Until now it was home quarantine for asymptomatic and those with mild symptoms. MHA argues isolation not possible in most homes. @IndianExpress

Tamil Nadu to go on intense lockdown from today

Several districts of Tamil Nadu, including Chennai, Thiruvallur, Kancheepuram, and Chengalpet, will go on an intense 12-day lockdown from today in a bid to curb the surge in COVID-19 cases in the districts. The Greater Chennai Police have issued a series of instructions for the city residents to follow during the period. Barring hospitals, labs, ambulances, pharmacies, and funeral hearses, there are restrictions on other activities. Auto rickshaws, taxi cabs will not be allowed to run in the city except in case of an emergency.

People are allowed to buy vegetables, groceries, and other essential items only from shops that are within a two-kilometer range from their residence. Shops will be allowed to function from 6 am till 2 pm. Tamil Nadu recorded 2,141 positive cases of Covid-19 on Thursday, bringing the state tally to 52,334. Among these, Chennai reported 1373 positive cases, bringing the city’s total to 37,070.

Considering the rise in COVID-19 cases, Aurangabad collector Uday Choudhari has asked private hospitals in the district to accommodate patients on regular beds if ICU ones were not available, a district official said on Friday. As on Thursday, Maharashtra’s Aurangabad district had recorded 3,106 COVID-19 cases, of which 1,709 patients have recovered from the infection, while 166 have succumbed to it.

Choudhari asked hospitals to inform the civic authorities before treating COVID-19 patients or suspects and shift them to a dedicated facility if beds were available, the official said. Private hospitals were also directed to admit patients, irrespective of whether they were referred by the civic body, to ensure timely treatment and accommodate them on regular beds if ICU ones were unavailable, he said.

Two more COVID-19 patients died at a hospital in Srinagar, taking the number of fatalities due to the novel coronavirus in the Union Territory to 74, officials said on Friday. Both the deaths took place at SKIMS hospital in Soura area of the city, the officials said.

A 79-year-old man from Nowshera area of Srinagar, who had tested positive for COVID-19, died at 11:15 pm on Thursday night, the officials said. They said the patient was admitted to the hospital on June 8 and was suffering from hypertension, hypothyroidism, with bilateral chest infiltrate.

A doctor speaks with a woman at a coronavirus help desk at the Government Fever Hospital in Hyderabad, on Wednesday, June 17, 2020. (AP Photo/Mahesh Kumar A.)

In another death at the hospital, an 80-year-old man from Sopore area of north Kashmir’s Baramulla district passed away at 9 am in Friday, the officials said. They said the patient suffering from hypertension and cardiac failure was admitted to the hospital on June 17.

No fresh case in Mizoram in 24 hours

No new case of novel coronavirus was registered in Mizoram in the last 24 hours, government sources said on Friday. According to a statement by the Department of Information and Public Relations, all 814 samples tested at Zoram Medical College (ZMC) on Thursday have reported negative for COVID-19.

A customer wears a mask as mandated by shops in Pune on Wednesday. (Express photo/Arul Horizon)

Of the 814 samples, 260 were from Lunglei district, 171 from Champhai, 89 from Serchhip, 87 from Lawngtlai, 69 from Aizawl, 72 from Saitual, 60 from Khawzawl and six from patients undergoing treatment at ZMC, the statement maintained.

People with COVID-19 symptoms wait outside a coronavirus help desk at the Government Fever Hospital in Hyderabad,on Wednesday, June 17, 2020. (AP Photo/Mahesh Kumar A.)

One more COVID-19 fatality was reported in Assam, taking the coronavirus death toll in the state to nine while 166 people including 25 from an army camp, tested positive pushing the tally to 4,861 on Thursday, Health Minister Himanta Biswa Sarma said. One person died in Diphu Medical College and Hospital and this is the second death from Karbi Anglong district.

Read | After Doklam, House panel had urged govt to be wary of China

Of the nine deaths reported so far, three are cancer patients. Eighty-four people tested positive for COVID-19 in the night while 82 others were detected during the day, the minister said. Of the 84 cases reported during the night, 25 are from Misamari Military Camp in Sonitpur district, 16 from Kamrup (M), 14 from Hailakandi, 13 from Karimganj, eight from Tezpur, five from Nagaon, two from Lakhimpur and one from Golaghat.

With a record spike of 2,877 COVID-19 cases, the total tally in the national capital crossed the 49,000 mark, while the death toll mounted to 1,969 on Thursday, according to a government health bulletin. The city recorded 65 COVID-19 fatalities within a period of 24 hours while the number of containment zones in the city on Thursday stood at 243.

The total number of coronavirus cases climbed to 49,979, of which 23,341 patients have recovered so far. There are 26,669 active cases in the national capital, the bulletin stated. As many as 3,21,302 tests have been conducted till date of which 8,726 were carried out on Thursday, it said.