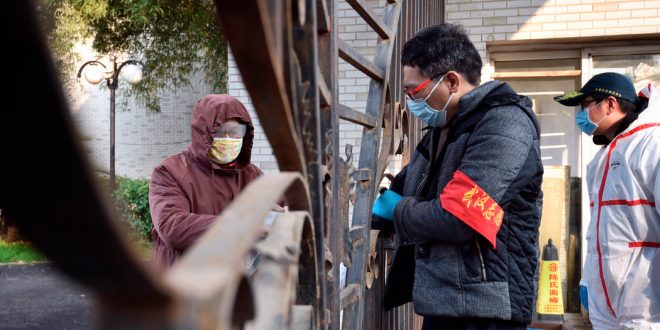 A dozen coronavirus cases have been confirmed at a single nursing home in Wuhan, China, the city at the center of the epidemic. Public health experts have said that nursing homes are among the most dangerous sites for transmission of the virus.

The elderly have been particularly vulnerable to the coronavirus, with many of the reported deaths occurring among people 60 and older. And nursing homes often house their residents in close quarters, which facilitates the rapid spread of viruses.

The nursing home, the Wuhan Social Welfare Institute, said 11 elderly residents and an employee had been confirmed to have the virus, according to a notice from the municipal civil affairs bureau in Wuhan, where the coronavirus emerged. One of the residents has died, the notice said.

“I think nursing homes would be the most dangerous place for an outbreak to occur,” said Dr. Benjamin Cowling, a professor of epidemiology at the University of Hong Kong.

In an indication of the risks that nursing homes pose, officials in recent days have moved to impose restrictions on how they provide care.

The Wuhan Municipal Bureau of Civil Affairs recently told nursing home directors that in order to prevent cross-infections, residents would no longer be allowed to return to their nursing homes if they visited a hospital for medical treatment, according to a report by the news outlet Southern Weekly. The report was removed by government censors.

In the city of Qiqihar, near the Chinese border with Russia, a district party secretary was removed from his post because he had not done enough to prevent the epidemic, according to an official notice on Feb. 15. Of 10 confirmed cases in the district he oversaw, one occurred in a nursing home, the notice said.

In the eastern province of Zhejiang, an official recently said that the province had been the first in China to seal off nursing homes, barring all from entering except for some essential staff members.

“Everyone knows that the elderly are the key group for epidemic prevention and control, and nursing homes are a place where the elderly live in high concentration,” said the official, Li Jie.

South Korea reports a spike in cases, and Samsung shuts down a factory.

South Korea reported 229 new coronavirus cases on Saturday, adding to fears of a global pandemic, while Samsung, the Korean company that is the world’s top smartphone maker, shut down a factory after a worker tested positive for the virus.

The new cases in South Korea brought that country’s total to 433 — more than half of them members of a secretive religious sect, their relatives or others who had gotten the virus from them. Another 111 of the cases were patients or staff members at the Daenam Hospital in Cheongdo, where the two South Koreans who have died of the virus had been admitted.

More than 1,250 members of the sect, the Shincheonji Church of Jesus, have reported potential symptoms, and officials are still trying to locate 700 members so they can be screened.

The Samsung factory, located in the city of Gumi, about an hour north of Cheongdo, is expected to resume operations on Monday morning, Samsung said. But the floor of the factory where the patient has worked will be closed until Tuesday morning, it said.

“The health and safety of our employees are our highest priority,” the company said in a statement. “The company plans to implement all necessary measures for disinfection and containment promptly.”

The Gumi factory mainly supplies the domestic market. The company also produces its smartphones in plants in Vietnam and India.

Iran’s death toll from the virus reaches 5, the highest outside China.

Iran, which insisted as recently as Tuesday that it had no coronavirus cases, confirmed 28 cases and five deaths on Saturday, according to Iranian news reports, making it the country with the highest death toll outside of China, where the number climbed to 2,345 on Saturday.

On Saturday, Dr. Tedros Adhanom Ghebreyesus, the World Health Organization’s director, said the organization was “especially concerned about the increase in cases in the Islamic Republic of Iran.”

Iran was the first country in the Middle East to declare deaths related to the virus. The head of public relations at the country’s health ministry, Kianush Jahanpur, wrote in a tweet that most of the infections came from Qom, 80 miles south of the capital, Tehran. Officials also confirmed cases in Tehran, and in the northern city of Rasht.

Already, cases of travelers from Iran testing positive for the virus have turned up in Canada and Lebanon.

As Iran holds parliamentary elections this weekend, many voters in Qom lined up in front of voting stations wearing masks, according to videos from Iranian news agencies.

Conflicting news reports emerged on Saturday about the mayor of a district of Tehran, who was said to have been hospitalized with coronavirus symptoms on Friday. But the semiofficial news agency Fars later denied that the mayor, Morteza Rahmanzadeh, had been hospitalized, saying he was in good health.

The total number of infections in China rose above 76,000 on Saturday. Spikes in infections were also reported in the United States, which now has 34 cases, with more expected, and Italy, which has 17 and has ordered mandatory quarantine measures.

“The cases that we see in the rest of the world, although the numbers are small, but not linked to Wuhan or China, it’s very worrisome,” Dr. Tedros said on Friday. “These dots are actually very concerning.”

Malaysia says the Westerdam cruise ship passenger who tested positive for the virus is now cleared of it.

An American woman whose coronavirus diagnosis upended the travel plans of thousands of cruise ship passengers, as well as raising fears that another vector of transmission was going global, is now free of the virus, Malaysian officials said on Saturday.

On Feb. 15, the Malaysian health authorities said that the woman, 83, an American passenger who had disembarked from the Westerdam cruise ship in Cambodia, had tested positive for coronavirus after arriving at the Kuala Lumpur airport.

Passengers had begun leaving the Westerdam the day before in Sihanoukville, Cambodia, where they were welcomed personally by Prime Minister Hun Sen, after the ship had been turned away from several other ports of call. The cruise ship’s owner and Cambodian officials maintained that all of the Westerdam’s passengers were virus-free, even though only 20 among the more than 2,000 people aboard had been tested for the coronavirus.

With the news that the American, who has not been publicly identified, had tested positive — and that a second test had confirmed the result — a Cambodian lab went into overdrive. The lab tested every passenger still in the country for coronavirus, while health experts worried that those who had already left might be unwittingly spreading the virus across the globe.

On Saturday, the Malaysian health director general, Noor Hisham Abdullah, said in a statement that the American woman was now clear of the coronavirus and was being monitored in the hospital with a “slight cough,” after an antiretroviral treatment.

About 80 percent of patients who contracted this strain of coronavirus had mild symptoms, Dr. Noor noted, citing data from the World Health Organization.

The announcement led to a furious response from Mr. Hun Sen, who accused the Malaysians of shoddy lab work. The woman never had coronavirus at all, Mr. Hun Sen claimed.

“The irresponsibility of some foreigners on the health test of Westerdam passengers makes Cambodia the victim of its humanitarian work,” Mr. Hun Sen said in a Facebook post on Saturday. “If I were the Malaysian P.M., I would remove the health minister for being neglectful and irresponsible.”

Dr. Noor, the Malaysian health director general, did not retract the earlier positive test results in his statement. The World Health Organization on Saturday said it had no update on the woman’s test results.

Stocks and sales fall as the virus knocks the global economy.

The coronavirus outbreak, whose breadth and duration remains a disquieting question mark, is forcing international companies across nearly every industry to face a stark reality: Business will not go on as usual.

And investors have taken notice. U.S. stocks fell for the second straight day on Friday, with the S&P closing more than 1 percent lower, putting it on pace for its worst day of the month. Oil and gas prices also fell.

Auto sales in China collapsed this month, with the Chinese Passenger Car Association saying that sales at dealerships had plummeted 92 percent in the first half of February compared with the same period last year. China is the world’s biggest car market by a wide margin, so a nose-dive in sales causes pain.

The International Air Transport Association this week warned of a deep drop in earnings of about $29 billion in this year among global carriers, with virtually all of the losses expected to hit airlines in the Asia-Pacific region.

French companies are warned against ‘overdependence’ on China.

The French government said Friday it would urge companies to review their “overdependence” on China for raw materials and parts as the coronavirus outbreak exposes weaknesses among French manufacturers that have outsourced their supply chains there.

Finance Minister Bruno Le Maire said the government had ordered a review of which strategic industries have grown too reliant on China for production, and is looking at ways to start bringing some production back to France or Europe.

He singled out automakers, which have had trouble getting parts like brake pedals, and the pharmaceutical industry, which gets 80 percent of the raw materials for some drugs from China and Asia.

“The epidemic shows that supply bottlenecks create problems in certain strategic industries,” Mr. Le Maire said after meeting with French business leaders about the economic fallout of the epidemic.

The government estimated the economy may shrink by around 0.1 percent this year as result of the outbreak.The government will help French companies affected by the virus by extending deadlines for paying taxes and encouraging big firms, especially in the luxury industry, to go easy on smaller suppliers having trouble filling orders.

France is also studying whether to allow companies to declare the coronavirus a “force majeur,” which relieves firms from liabilities for breach of contract because of circumstances beyond their control.

Wuhan, the epicenter of the outbreak, is home to more than one third of all French investment in China.

A Chinese beekeeper killed himself after travel restrictions imposed to fight the outbreak prevented him from providing food for his bees, according to a beekeepers’ association.

The Apicultural Science Association of China said it was “extremely heartbroken” about the death of Liu Decheng in the southwestern province of Yunnan. He was in his mid-40s, according to Chinese media reports.

His death occurred just before the Chinese authorities ordered special measures to protect the beekeeping industry, including easing transportation rules, the association said.

In a WeChat post this week, an account that shares honey-related tips said Mr. Liu’s bees had also been poisoned. It said he was prevented from transferring them to a different site because of the travel restrictions.

Agricultural workers in rural areas have been hit especially hard by the lockdown measures enacted to stop the spread of the virus.

The disappearance of tens of thousands of flights from China’s skies in recent weeks points to how the coronavirus has hobbled a nation.

Within just three weeks — from Jan. 23 to Feb. 13 — daily departures and arrivals for domestic and international flights in China dropped to just 2,004, from 15,072, according to Flightradar24, an industry data firm.

Restrictive measures adopted by China have helped delay the spread of the virus to other countries, the World Health Organization said this week, but the country’s increasing isolation could have lasting economic consequences.

Oxford Economics said in a new report that, in a worst-case scenario, the outbreak could cut $1.1 trillion in global output.