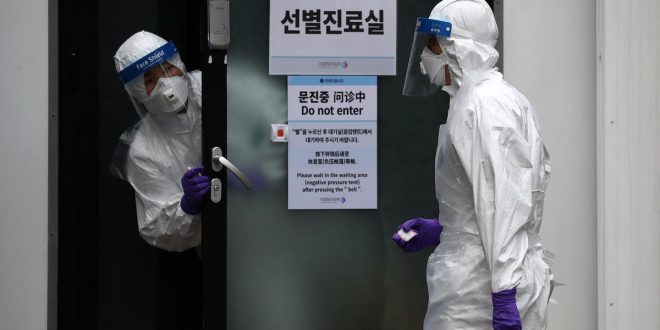 China says expelled WSJ reporter stuck in Wuhan can stay, but not report

A Wall Street Journal reporter will remain in the locked-down Chinese city at the center of the new coronavirus outbreak despite being ordered to leave the country, authorities said Tuesday. Three journalists had their press credentials revoked and were told to depart China last week over what Beijing said was a racist headline in the newspaper’s opinion pages, which none of the trio were involved in writing.

Two flew out from Beijing on Monday but the third — U.S. national Chao Deng — has been reporting from Wuhan, where the virus was first detected.

The central city and industrial hub has been under effective quarantine for more than a month and its 11 million residents have been largely confined to their homes.

Chao will not be expelled for the time being but will not be permitted to work while she remains in China, foreign ministry spokesman Zhao Lijian told a press briefing.

Iran’s deputy health minister Iraj Harirchi has been infected with the new coronavirus, a ministry official said on Tuesday, amid a major outbreak in the Islamic Republic.

Harirchi coughed occasionally and appeared to be sweating during a press conference on Monday with government spokesman Ali Rabiei.

The deputy health chief was among central government figures who last week disputed claims from regional officials in the outbreak epicenter city of Qom who suggested Tehran was trying to cover up the severity of the outbreak in the country.

Coronavirus outbreak spreads in, and from, northern Italy

Italian police have cordoned off areas near Milan and Venice where about 50,000 people live, but CBS News correspondent Mark Phillips said the big question on Tuesday was whether all of Italy’s coronavirus cases could be traced to that northern region.

Luigi d’Angello is coordinating the Italian government’s emergency response, and he told CBS News that the seven people confirmed to have died in the country with the new disease had underlying health problems, but the coronavirus “amplified their sickness.”

Phillips noted that while the World Health Organization hasn’t yet labeled the new virus a global pandemic – meaning it is not considered to be spreading uncontrolled around the world, it still has the potential to become one, and fast-growing new clusters like the one in Italy are a worrying sign. So too are cases popping up elsewhere with links to northern Italy.

An Italian doctor from the north of his country tested positive for the virus while visiting the Spanish island of Tenerife, prompting all guests at his hotel to be confined to their rooms on Tuesday.

Italy’s coronavirus outbreak, the first major one in Europe, continued to grow on Tuesday as officials confirmed dozens of new cases. There were a total of 283 people with the COVID-19 disease, seven of whom had died. That was an increase of 54 confirmed cases since Monday evening.

The outbreak was centered in the northern region of Lombardy, with total of 212 cases and six of the deaths. Dozens more were sick with the virus in nearby Veneto.

Britain’s government on Tuesday urged anyone returning to the U.K. from those regions to self-isolate for two weeks, and anyone returning from other parts of Italy to do the same if they felt any flu-like symptoms.

Hundreds of people were confined to their rooms at a hotel in Tenerife, a Spanish island off the west coast of northern Africa, on Tuesday after an Italian tourist was hospitalized with a suspected case of coronavirus, health officials in Spain’s Canary Islands said.

“Hundreds of hotel clients are being monitored for health reasons and the degree of supervision will be assessed during the day, but so far, we’re not talking about quarantine,” health authority spokeswoman Veronica Martin told AFP, confirming that the Italian tourist “was staying at this hotel while on holiday in Tenerife.”

Speaking to reporters during a visit to India on Tuesday, President Donald Trump voiced confidence that U.S. health care officials were ready and able to control the spread of the coronavirus outbreak.

He called the COVID-19 outbreak that began in China “pretty bad,” noting it’s severe impact on stock markets Monday, but said “we think we’re in very good shape in the United States.”

“I think it’s going to be under control,” Mr. Trump said, lamenting the huge drop in stock values Monday, but saying it was out of his or anyone else’s control.

He said the U.S. had been “fortunate so far,” with just 53 confirmed cases, most of them from a single cruise ship that docked weeks ago in Japan. “We think it’s going to remain that way,” said Mr. Trump.

The president again lauded China’s handling of the outbreak and said it looked as though the Chinese were, “getting it more and more under control, and so I think that’s a problem that’s going to go away.”

Stock prices sink in Europe and Asia, but not like Monday’s sell-off

Shares opened lower in Europe on Tuesday after a mixed session in Asia, where Tokyo’s Nikkei 225 index skidded more than 3% as Prime Minister Shinzo Abe urged fresh efforts to contain the outbreak of a new virus that has spread from China to nearly three dozen countries.

Nerves appeared to have steadied after sell-offs Monday that gave Wall Street its worst day in two years, with the Dow Jones Industrial Average tumbling more than 1,000 points.

But a growing number of companies are forecasting their profits will suffer from disruptions caused by efforts to contain the virus. New clusters of the disease were rattling markets as they emerge, unleashing waves of volatility.

The United Arab Emirates on Tuesday banned all flights to and from Iran over the outbreak of the new coronavirus, just a day after its spread from the Islamic Republic was announced across multiple Mideast nations. Iran meanwhile raised the official death toll from the virus to 15 killed amid 95 confirmed infections.

The UAE, home to long-haul carriers Emirates and Etihad, remains a key international transit route for Iran’s 80 million people. The flight ban, which will last at least a week, shows the growing concern over the spread of the virus in Iran amid worries the outbreak may be larger than what authorities there now acknowledge.

“All passenger and cargo aircraft traveling to and from Iran will be suspended for a period of one week, and could be up for extension,” the Emirates’ General Civil Aviation Authority said. “The decision is a precautionary measure undertaken by the UAE to ensure strict monitoring and prevention of the spread of the new coronavirus.”

In a statement Monday night, House Speaker Nancy Pelosi called the president’s request “long overdue and completely inadequate to the scale of this emergency.” She said the House would advance “a strong, strategic funding package that fully addresses the scale and seriousness of this public health crisis.”

“We have a crisis of coronavirus and President Trump has no plan, no urgency, no understanding of the facts or how to coordinate a response,” Senate Minority Leader Chuck Schumer said.

To help fund the plan, the administration wants to transfer $535 million from an Ebola preparedness account that’s been a top priority of Democrats. House Democrats said that request was dead on arrival.

A federal judge on Monday ordered U.S. and California officials to answer questions from local officials about plans to relocate former cruise ship passengers who test positive for a new coronavirus to a facility in Southern California.

U.S. District Judge Josephine Staton, who had already temporarily blocked federal officials from transferring passengers to the site, said mistakes can be made when acting in haste. She set another hearing to review the issue next Monday.

The contentious hearing lasted more than two hours and was so crowded some people had to sit on the courtroom floor.

Officials from Costa Mesa, an Orange County city of 113,000, are trying to halt the transfer to their community of patients who were evacuated from a cruise ship in Japan and are under quarantine at Travis Air Force Base in Northern California. Those who tested positive for the virus were sent to area hospitals but can’t be returned to Travis once they no longer need treatment, federal officials said.

City officials questioned why a facility that was recently deemed too dilapidated for a homeless shelter is suddenly being considered for this purpose. Local officials said they weren’t included in the planning process and want to know what safeguards are in place to prevent the possible transmission of the virus that has caused more than 2,600 deaths, most of them in China.

Production on “Mission: Impossible 7,” which is being filmed in Venice, Italy, has been temporarily halted due to the recent coronavirus outbreak.

“Out of an abundance of caution for the safety and well-being of our cast and crew, and efforts of the local Venetian government to halt public gatherings in response to the threat of coronavirus, we are altering the production plan for our three week shoot in Venice, the scheduled first leg of an extensive production for “Mission: Impossible 7,” a spokesperson for Paramount Pictures told CBS News.

Italy has the largest number of coronavirus cases of any country outside of Asia.

Paramount Pictures and CBS News are both owned by ViacomCBS

The Centers for Disease Control and Prevention upgraded its travel notice for South Korea on Monday to “Avoid nonessential travel,” warning of “a widespread, ongoing outbreak of respiratory illness.”

The coronavirus has spread rapidly in South Korea in recent days. There have been more than 700 confirmed cases of the disease in the country, according to the World Health Organization.

The Trump administration has proposed a $2.5 billion plan to help fight the coronavirus outbreak, according to a statement from the Office of Management and Budget.

“The Trump Administration continues to take the spread of the COVID-19 Coronavirus Disease very seriously,” said spokesperson Rachel Semmel. “Today, the Administration is transmitting to Congress a $2.5 billion supplemental funding plan to accelerate vaccine development, support preparedness and response activities and to procure much needed equipment and supplies.”

The plan includes a request for $1.25 billion in emergency funding, as well as for an additional $535 million currently earmarked for Ebola prevention and treatment.

An administration official told CBS News that the plan includes more than $1 billion for vaccines, and that the money will be requested in a lump sum to give the Department of Health and Human Services the maximum amount of flexibility. The official added that while the resources are intended for 2020, the language will allow for spending to continue through 2021.