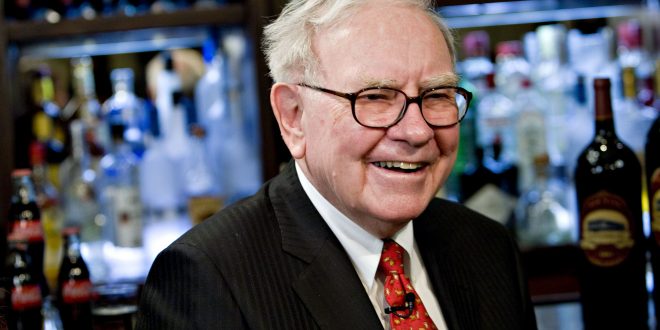 8:15 am: Buffett says he got a smartphone

8:11 am: It is ‘harder’ to buy back shares than say Bank of America buying back its stock

Buffett said that it’s difficult for Berkshire Hathaway to buy back large numbers of its shares. “It’s harder to buy back Berkshire Shares than say Bank of America buying back its stock … they can really do it without moving the market.” “Berkshire is held by people that really primarily keep it,” he added.

8:04 am: Apple is ‘probably the best business I know in the world’

Apple is Berkshire Hathaway’s third largest business behind insurance and railroads, Buffett said. He called the company “probably the best business I know in the world.” Berkshire owns roughly 5.5% of the business, he said.

7:54 am: Would ‘certainly’ vote for Bloomberg

Buffett said that while he’s a democrat, he’s not a “card-carrying democrat” and has voted for Republican candidates in the past. As Senator Bernie Sanders surges in the polls, he said that “we will see what happens” regarding the Democratic nominee. Buffett did say that he’s a “card-carrying capitalist.”

7:41 am: Buffett says Berkshire is worth the same with or without him

Buffett will turn 90 later this year, and in recent years there’s been questions about Berkshire Hathaway’s succession plans. “Berkshire without me is worth essentially the same as Berkshire with me. My value added is not high, but I don’t think I’m subtracting value,” Buffett said.

7:38 am: Buffett says bank stocks are ‘very attractive compared to most other securities’

“I feel very good about the banks we own. They’re very attractive compared to most other securities I see,” Buffett said. Banks are a big part of Berkshire Hathaway’s portfolio, which is worth more than $248 billion. Goldman Sachs, JPMorgan Chase, Bank of America, BNY Mellon, and U.S. Bancorp were all among Berkshire’s 15 largest stock holdings.

Correction: An earlier version misstated Buffett’s title. He is chairman and CEO of Berkshire Hathaway.

7:32 am: Wells Fargo shareholders would be ‘a lot better off’ had company addressed problems sooner

Berkshire has been selling its stake in Wells Fargo, and Buffett said that the the bank is a “classic in terms of one lesson,” which is that the company should have attacked the problem “immediately.” “They had an obviously very dumb incentive system … the big thing is they ignored it when they found out about it.” Buffett said that shareholders would be “a lot better off” if the bad practices weren’t ignored, which was a “total disaster.”

While some have said that Berkshire Hathaway’s businesses could be more profitable if the conglomerate were to split, Buffett said that would actually be bad for business. “You can have spin offs … you cannot dispose of the entire business without having very substantial tax liabilities,” he argued. “It would not produce a gain. Having them together, however, produces very valuable synergies.”

“There would not be a profit if we were simply to announce that over the next 24 months you could come in and buy any business we had and we would sell to the highest bidder,” he added.

7:13 am: Coronavirus outbreak shouldn’t affect what investors do with stocks

Buffett said that while the coronavirus outbreak is daunting for the human race, it shouldn’t impact investors’ portfolio decisions. “It is scary stuff. I don’t think it should affect what you do with stocks, but in terms of the human race it’s scary stuff when you have a pandemic,” he said. Berkshire Hathaway’s annual meeting is May 2, which Buffett said the coronavirus could “very well” impact.

7:05 am: Buffett warns that ‘reaching for yield is really stupid’

The Berkshire Hathaway chief said that investors should not reach for yield beyond their risk-tolerance, even with interest rates so low and stocks seemingly like the only place to get a return. “Reaching for yield is really stupid. But it is very human,” he said, delivering sobering advice to folks near or in retirement. “People say, ‘Well, I saved all my life and I can only get 1%, what to do I do? You learn to live on 1%, unfortunately.”

Berkshire Hathaway’s cash balance now stands at $128 billion, leading some investors to question why the Oracle of Omaha hasn’t put the firm’s war chest to work. “We’d like to buy more,” he said, after being asked about his cash on hand.

6:39 am: Buffett won’t reveal why he sold Wells Fargo

Berkshire Hathaway sold some of its Wells Fargo position in the fourth quarter, filings revealed, but when Buffett was pressed for why the firm decreased its position he wouldn’t reveal why. “We’ve bought Bank of America and sold Wells Fargo,” he said.

6:25 am: ‘Very significant percentage of business’ impacted by coronavirus

As the ongoing coronavirus outbreak hits stocks, Buffett said “a very significant percentage of our businesses one way are affected.” He added, however, that the businesses are being affected by a lot of other things too, and said the real question is where those businesses are going to be in 5 to 10 years. “They’ll have ups and downs,” he said.

Specifically, he pointed to Apple and Dairy Queen being hit, as well as carpet maker Shaw Industries.

6:19 am: Buffett says he’s bought stocks every year since he was 11

“I haven’t bought stocks every day. There have been a few times where I thought stocks have been quite high, but that’s very seldom” he added.

As volatility in the market increases because of the coronavirus, Buffett said not to make investing decisions based on day-to-day moves. “You don’t buy or sell your business based on today’s headlines. If it gives you a chance to buy something you like and you can buy it even cheaper, you’re in good luck,” he said, adding that “you can’t predict the market by reading the daily newspaper.”

As stock futures drop, with the Dow pointing to a more than 800 point loss at the open, Buffett said “that’s good for us.” “We’re a net buyer of stocks over time,” he said. “Most people are savers, they should want the market to go down. They should want to buy at a lower price.”

Subscribe to CNBC PRO for exclusive insights and analysis, and live business day programming from around the world.