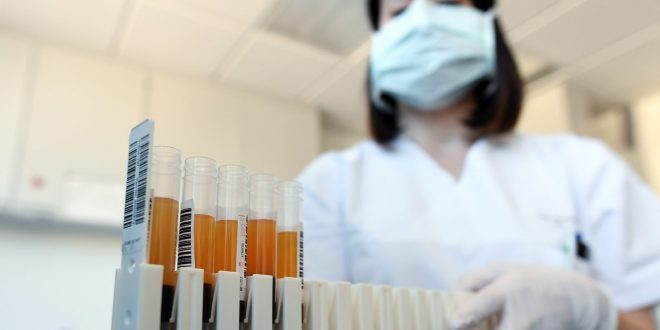 Coronavirus: Trial begins to see if plasma from COVID-19 survivors can fight the virus | UK News

A trial has begun to test if plasma rich in antibodies from the blood of those who have recovered from COVID-19 could be the key to fighting the virus.

Blood is taken from a volunteer’s arm and then returned to the body once the liquid, known as convalescent plasma, has been removed.

If it proves successful, seriously unwell patients would receive a transfusion of the fluid to help their body fight the virus.

As a doctor who recently lost a close colleague to the coronavirus, neonatologist Matt Nash was in no doubt about volunteering.

“Seeing someone who you work with, are very close with, and is a friend, going through it and then ultimately losing their battle, has been quite an impetus,” he said.

“When the call came though asking whether I wanted to give some plasma, it was an easy option… ‘yes, anything I can do to help’.”

The whole process takes 45 minutes and provides two units of the liquid which can be frozen for future use.

If effective, a scaled-up national programme would provide up to 10,000 units per week, enough for 5,000 patients.

Tom Congdon is afraid of needles but was determined to help.

“I don’t really like hospital, but this was fine,” he said.

“Once I got screened, tested for blood pressure and everything, they just stuck the needle in, which hurt a lot less than I thought, and just went and did it.”

Health Secretary Matt Hancock said thousands of patients could potentially benefit from the treatment in the future.

“The UK has world-leading life sciences and research sectors and I have every hope this treatment will be a major milestone in our fight against this disease,” he said.

But while Dr Bharat Pankhania, senior clinical lecturer at the University of Exeter, hopes it will work, he has concerns.

“This is a blood-borne product so we have got to be really careful about not causing any harm… There are things that can go wrong, such as introducing an infection or an allergic reaction,” he said.

“The other thing is, the sooner we can give it to the patients the better, so we have got to work out who’s going to need it and how we are going to give it to them earlier in their illness.”

Donors have to have felt better for least 28 days before taking part in the trial. They should be aged 17 to 66 and not have had a heart condition or be recently pregnant.

Jo Toozs-Hobson’s immediate family all caught the virus and her doctor husband spent five days in hospital. She described taking part as a “no-brainer”.

“We have got all these people in intensive care and if the antibodies in the plasma can make a difference then we should all be doing everything we can and this is something I can do, so that’s why I’m here,” she said.

Convalescent plasma has already been used to treat infections like SARS.