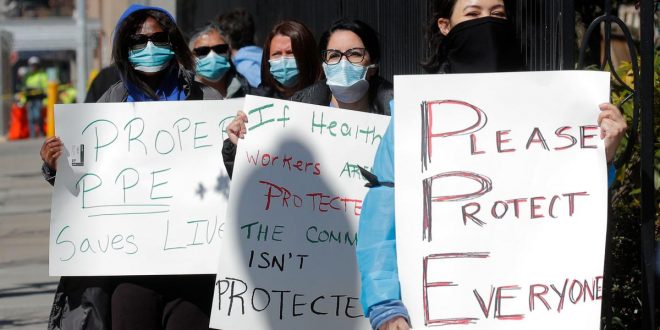 (Reuters) – A U.S. District Court on Friday dismissed a nurse association’s plea against New York state and two hospitals to provide safety equipment and adopt measures to stop the spread of COVID-19 among its members, asking the parties to reach an amicable agreement.

Last month, the New York State Nurses Association (NYSNA) sued the New York Department of Health, Montefiore Medical Center and the parent company of the Westchester Medical Center, saying the hospitals were ignoring requirements that healthcare workers each receive an N95 respirator mask daily, and that the health department was not enforcing it.

The Court said the parties are in a better position than the court to reach a resolution, adding that the court lacks the authority to address the nurse association’s concerns.

“Both sides presumably share the ultimate goal of maximizing protections for healthcare workers on the front lines of the battle against a vicious disease without compromising patient care,” U.S. District Judge for the Southern District of New York Jesse Fruman said in the proceeding.

“The parties are plainly in a better position than either the Court or an arbitrator to find the best ways to achieve that goal despite limited resources and ever-changing circumstances,” Fruman said.

The judge also asked the health department and the hospitals to take swift action in addressing the nurses’ requests. The state and two hospitals had earlier said they were taking necessary actions to protect the healthcare workers.

The judge said that if the two sides fail to reach an amicable resolution, they can expedite a court proceeding.

As of May 1, more than 164,000 people in the state have tested positive for the respiratory disease COVID-19, with about 13,000 confirmed deaths from the viral illness.

Reporting by Aakriti Bhalla in Bengaluru; Editing by Tom Hogue