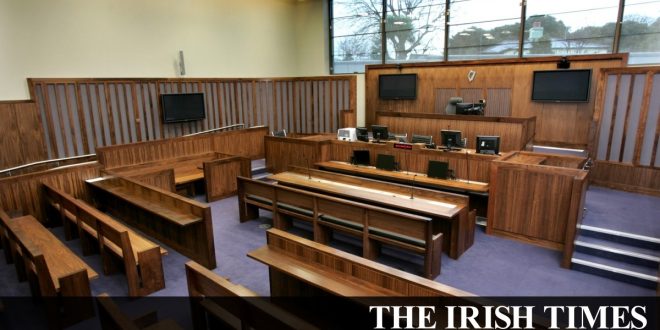 Courtroom drama thin on the ground amid Covid-19 anguish

The changes to the criminal courts system amid the coronavirus crisis are difficult to spot at first.

Aside from the hand-sanitiser dispensers and warning signs dotted around the Criminal Courts of Justice (CCJ) on Dublin’s Parkgate Street, the wheels of justice appear to be turning relatively normally, albeit with a vastly reduced caseload. It is only when you look closer that the changes become clear.

In court six, where a woman is on trial for murder, there are six jurors only in the jury box. The rest are sitting in the body of the court in an attempt at social distancing. The jurors look to be less than 2m apart, but it’s better than nothing.

In another court, the jurors in the trial of a creche worker accused of sexual assault are considering their verdicts. Deliberations are not taking place in the jury room, but in the court itself where there is much more room.

Up in court 17, where the High Court bail list is being heard, only a handful of lawyers are allowed in at a time. Most defendants appear via video link from Cloverhill Prison with their images projected on large TV screens in the court.

The few inmates in attendance are accompanied by prison officers who are clean shaven and wear no ties as part of hygiene measures ordered to prevent the nightmare scenario of a Covid-19 outbreak in the prison system.

The situation in the CCJ has improved since Monday, when barristers reported up to 80 people waiting together outside court. The Courts Service attributed the crowd to a “glitch in the system”.

The only real black mark on Tuesday was a large congregation on one of the floors. One group supporting the accused in a trial, the other backing the complainant. A handful of gardaí patrolled the floor, trying in vain to enforce social distancing protocols.

The most interesting case on the shortlist is a Italian woman convicted of helping to smuggle in illegal immigrants.

The interpreter is instructed to do her job from the other end of the defendant’s bench. When the arresting garda is called to give evidence, the registrar tells him to “hover your hand over the Bible to take the oath”.

There are only four jury trials ongoing in the State, all of which started before the coronavirus outbreak became a crisis. Just one trial has collapsed due to jurors being sick or unwilling to risk further service.

The courts are in “winding down mode”, says a Courts Service spokesman.

Only urgent cases, such as accused people in custody seeking bail, will be heard and it will likely be June or later before things start returning to normal, he adds.

Measures to make up the lost time, such as sitting through the traditional summer vacation, have not yet been considered.

In Court five, which deals with offenders who have pleaded guilty, a junior counsel wears a face mask and surgical gloves – the first update to the barristers’ uniform since 1685 when the profession adopted black robes to mourn the death of Charles II.

One lawyer complains to the judge he is not getting legal aid payments because his cases are being adjourned. Judge Melanie Greally sympathises, but says it is a matter for the Department of Justice.