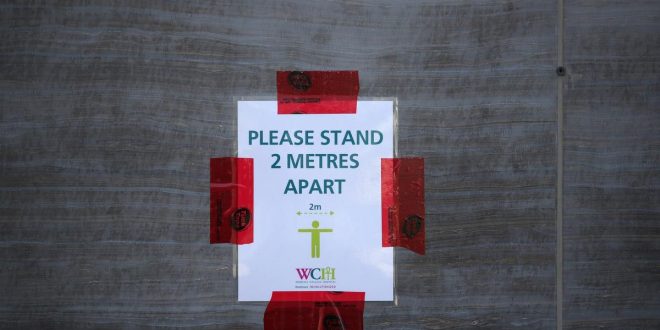 The latest novel coronavirus news from Canada and around the world Tuesday (this file will be updated throughout the day). Web links to longer stories if available.

7:03 a.m. An open conflict broke out Tuesday between Tokyo Olympic organizers and the IOC over who will pay for the unprecedented year-long postponement.

Tokyo spokesman Masa Takaya said the organizing committee has asked the Switzerland-based International Olympic Committee to remove a comment from its website suggesting that Prime Minister Shinzo Abe had agreed that Japan would shoulder most of the postponement costs.

Media reports in Japan estimate the year-long delay caused by the coronavirus pandemic will cost $2 billion to $6 billion. Neither side has given an official estimate, but Tokyo CEO Toshiro Muto has called the postponement costs “massive.”

“It’s not appropriate for the prime minister’s name to be quoted in this manner,” Takaya said on a 90-minute teleconference.

Almost all of the questions, mostly from Japanese reporters, centred on the IOC’s statement and the costs for Japan.

The IOC statement, on a page titled “Frequently Asked Questions about Olympic Games Tokyo 2020,” said Abe had agreed that Japan “will continue to cover the costs it would have done under the terms of the existing agreement for 2020, and the IOC will continue to be responsible for its share of the costs.”

5:30 a.m.: South Korea has reported nine new coronavirus infections and one more death, bringing its totals to 10,683 cases and 237 deaths. South Korea’s Centers for Disease Control and Prevention said at least 1,011 cases were linked to recent arrivals from overseas.

The country’s caseload has slowed from early March when it was reporting around 500 fresh cases a day. Infections continued to wane in the hardest-hit city of Daegu, which reported two new cases.

5:26 a.m.: Indonesia’s President Joko Widodo has banned people in the world’s most populous Muslim-majority nation from returning to their hometowns to celebrate Eid al-Fitr, which marks the end of the dawn-to-sunset fasting during Ramadan.

The announcement came amid warnings from health experts that Indonesia could face an explosion of coronavirus cases that could infect more than a million people after Ramadan unless the government takes stricter measures.

There are 36,831 confirmed and presumptive cases in Canada.

Widespread testing was conducted at the North York facility over the weekend, and strikingly, a large number of those who tested positive showed few or no symptoms, according to Patricia Mueller, chief executive officer of Homes First, the agency that operates the 200-bed shelter.

Mueller said she is hopeful it will not have the same impact on refugees at Willowdale, who on average are 40 years old or younger and are in generally good health.

12:20 p.m.: Ontario modelling suggests the COVID-19 epidemic has peaked in broader community and “is coming under control,” but seems to be growing in long-term care and other congregate settings. The Star’s Kate Allen and Jennifer Yang wrote about the “two epidemics” in the province.

12:15 p.m.: Ontario has hit its predicted COVID-19 peak early thanks to stay-at-home and physical distancing measures expected to keep the total number of cases far below grim scenarios presented two weeks ago, according to new computer modelling released by the province.

“These actions are making a difference and people need to stay the course and stay strong in order to save live,” according to notes prepared for a briefing by health officials Monday.

Previous Australia coronavirus updates live: Scott Morrison speaks to Bill Gates about future of WHO – latest news
Next ‘If you go to work, you have to move’: Doctor evicted during COVID-19 crisis