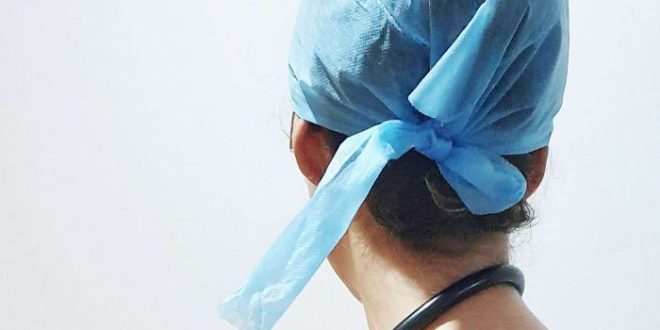 ‘If you go to work, you have to move’: Doctor evicted during COVID-19 crisis

Hannah* was working a 10-hour shift at a Queensland hospital when her phone buzzed.

“Hi Hannah. This is a sore subject but due to isolation and this virus I want to have a talk to you all ASAP. Just so you know it’s about isolating the house,” the text message from her landlord read.

Hannah, a doctor specialising in anaesthesiology, had been sharing a house with three other young women — one of whom was the landlord’s daughter.

“I had a bit of a bad feeling about [the message]. I was at work, so I just tried to push it out of my mind so I could concentrate on what I needed to do,” she said.

Upon finishing her shift at the hospital near Brisbane, she called her landlord.

“He essentially said I could either stop working or I had to move out as soon as possible,” she said.

“He felt that I was at high risk of being exposed and thus bringing COVID-19 back to the house, I suppose.”

Messages from the landlord to Hannah read:

“It’s important that you understand if you go to work you have to move ASAP before the end of your current paid rent,” he wrote.

At the time, Hannah’s work at the hospital involved helping out at the intensive care unit where one of the patients had COVID-19.

Hannah said she did not have direct contact with the patient and most of her work related to getting the anaesthesia department ready for the possible influx of coronavirus patients.

“We are helping to provide a service through the COVID-19 crisis. So, I don’t think it’s fair to stop me helping with the delivery of that service because of his [the landlord’s] desire to protect the house,” she said.

“I was surprised that he would want to exclude my help, not only of him if he became unwell but the rest of the public.

“It doesn’t seem that he quite made the connection that if he came in with a serious infection, it’d be people like me at work who would be looking after him and making sure that he got through that.”

‘Stay if you want, but I’ll make sure it’s not pleasant’

When Hannah told her landlord she was considered an essential worker — and due to having to work overtime could not take time off for house hunting — he said he was “very understanding” and praised her work, but did not budge.

“Again you have the option to stop work just like many,” he wrote.

“The world is not a perfect place and COVID-19 has just [made] it worse. I need [the house] isolated.”

As a compromise, Hannah suggested she could limit the use of communal areas in the house by utilising the laundry sink only and showering at work as much as possible.

But she said the landlord said she would need to cook, shower and brush her teeth at work and be confined to her room only, when at home.

“I think it was his way of saying, ‘I’m not happy with that. There’s no in-between ground’. Plus, the hospital is not really set up for me to live there,” she said.

To speed up the process, the landlord offered to help her look for a new place that would be in close proximity to the hospital — but suggested she shouldn’t tell prospective landlords she was a doctor.

“Don’t tell them you work at a hospital,” he wrote.

“I can only interpret it as he was so desperate to get me out of his house — and the perceived risk I was posing to him and his family — that he was willing to force what he thought was a risk on other people,” she said.

Hannah’s experience began the day after Prime Minister Scott Morrison announced the moratorium on evictions during the pandemic.

She contacted a property lawyer who drafted a letter informing the landlord of Mr Morrison’s plea not to kick out tenants during the crisis.

Hannah said the handing over of the letter “went down like a sack of nails” and resulted in “a lot of anger” from the landlord and his daughter, who was also her housemate.

Hannah said the daughter told her she was not wanted at the house.

“She said, ‘stay if you want, but I’ll make sure it’s not pleasant for you’,” Hannah said.

Two days after the initial text message from her landlord, Hannah left.

Hannah’s landlord and her former housemate were contacted by the ABC but neither wished to provide a comment.

‘Slap in the face to people keeping us safe’

On March 29, the National Cabinet agreed on a six-month freeze on evictions, but states were left to enact the legislation.

Some states have already made it illegal for landlords to kick out tenants, while others are still waiting for the legislation to go before the Parliament.

Queensland, Victoria and Western Australia are expected to pass their laws this week — and it’s likely to be retrospective to the date Mr Morrison made the announcement.

Tenants Queensland CEO Penny Carr said in the meantime tenants had been evicted either due to fears they might have COVID-19 or because they were in rent arrears.

“There’s certainly situations out there, where people have come back from overseas and the owner has taken all of their stuff out — this happened a couple of weeks ago — because they’re worried about contracting a virus from someone who’s back from overseas,” she said.

“We had a woman recently who had been applying for multiple properties, and she finally came to the conclusion that because she worked in the aged care sector she was finding it very difficult to be accepted for properties.

“Certainly, there’s no community spirit about it, I have to say the very least.

“We’re all going to take a hit. It’s going to be painful for everybody. And we’ve got to look after each other.”

The Real Estate Institute of Queensland (REIQ) said it had “received some reports that landlords have been evicting tenants during this time”.

“Although [the] law is yet to be enacted by the Queensland Government, the REIQ has been providing best practice advice that in the interim, tenants and landlords respect one another and landlords negotiate with tenants in hardship to avoid evictions,” it said.

“Most people who need to self-isolate will likely be advised by a health professional. A landlord is not in a qualified position to make this decision for any tenants.”

Tasmania was the first jurisdiction in Australia to make evictions illegal during the pandemic.

Tenants’ Union of Tasmania solicitor Ben Bartl said the state had been “extremely quick” in passing the law on April 3, and most landlords had been compliant with the legislation.

“All tenants can be assured that unless they are violent or damage the property through wilful behaviour, they’ll be able to remain in their property,” he said.

But that, he said, did not mean landlords were not pressuring tenants to make the decision to leave.

Referring to Hannah’s case, he said landlords should not tell essential workers not to do their jobs.

“Another way to describe it is it’s a slap in the face to the very people that we’re calling on to keep us safe during this pandemic,” he said.

Dr Chris Moy from the Australian Medical Association said the majority of people had shown “admiration” and “respect” for healthcare workers, but there were “definitely some” cases where staff had been subjected to abhorrent behaviour.

“For example, individuals travelling on public transport in uniform, and frankly given the evil eye by other passengers. They’re too fearful that they might catch COVID-19 from them,” he said.

“It is disappointing that the very people, who are the ones who are having to go to the frontline and actually put themselves at risk, are discriminated against by the small minority of the population.”

After Hannah left her accommodation hurriedly, her hospital put her up at a motel for one night.

The next day, a colleague took her in.

She said her landlord said perhaps the hospital could provide her accommodation during the pandemic.

“I thought it was a very strange mentality. I hope the public realises that it’s not a bottomless well of money, and the money that they would be diverting putting me into emergency [accommodation] is money they could be paying for new ventilators,” she said.

Her hospital did not want to provide a comment and Hannah herself had some reservations about telling her story, but decided to go ahead.

“Quite a few colleagues have said to me, ‘you should really speak up about this because if it’s happening to you, it’s possibly happening to other people’,” she said.

*Hannah’s name has been changed.