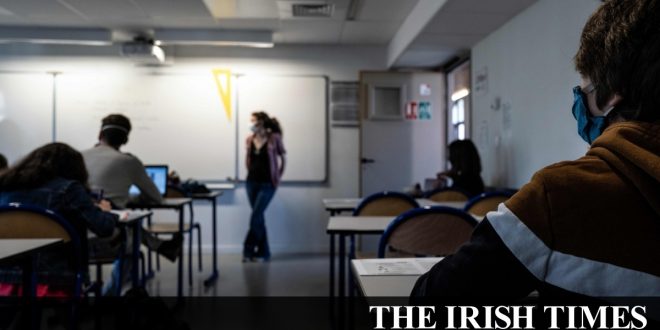 Covid-19: Pupils may be kept apart in groups and pods when schools reopen

Schools may be asked to keep groups of students or classes apart from each other at all times as a way of getting around social-distancing requirements when they reopen in late August.

On Friday, Taoiseach Leo Varadkar confirmed primary and secondary schools would reopen at the end of August.

The idea is one option which Department of Education officials are considering as a way of ensuring as many students as possible can attend class full-time, according to well-placed sources.

Under current social-distancing rules, it estimates that smaller classrooms could only fit three or four pods of children, or 12-16 pupils.

Speaking to reporters, Mr Varadkar said the Government realised it was not a “no-risk scenario but we know it’s a low-risk scenario”.

While it may not be possible for every pupil to attend every school for the whole day every day at the start of school terms, he said the intention was to reopen schools as “fully as possible”.

The eligibility criteria for children returning to childcare at the end of June have been broadened to include those whose parents need the service to return to work or training, the Department of Children announced.

The initial roadmap suggested it would just be children of essential workers who could return to childcare on this date. However the criteria now include the children of parents who need childcare for employment or education purposes.

These parents must have had their child in a facility prior to closure on March 12th, the department said. However, if there are capacity issues, priority would be given to children of essential workers.

Meanwhile, the State has changed how it is publishing details of Covid-19 deaths and is now disclosing the number of “possible” cases, along with those that have been confirmed or are regarded as having been probably caused by the virus.

This week, the Health Protection Surveillance Centre started publishing information on the number of “possible” Covid-19 fatalities in the overall number, putting this figure at 10 per cent of all deaths.

Previously, it only published a total aggregate figure for Covid-19 deaths in its daily reports that included both “confirmed” and “probable” cases but without disclosing the numbers of each.

This week, it began providing a more detailed breakdown of the overall death toll in three categories, providing separate figures for confirmed, probable and possible deaths.

Chief medical officer Dr Tony Holohan said the figures reported by the National Public Health Emergency Team every day have included “possible” cases in the probable figures and were all counted within the overall number of deaths announced each day.

The HPSC defines a possible case as one that meets the clinical criteria of a suspect case and no alternative diagnosis, microbiological or non-infectious, has been found.

The emergency team reported on Friday night that another six people had died with Covid-19 in the State, alongside a further 39 diagnoses of the disease. In total, 1,645 Covid-19-related deaths have taken place in the State, with 24,876 cases now having been diagnosed.

Public health officials asked people to keep a record of who they meet over the bank holiday weekend, in order to aid contact tracing should they become infected with the virus as they will be “out and about” more with good weather forecast.

Meanwhile, US president Donald Trump has said the US will be terminating its relationship with the World Health Organisation, claiming it failed to adequately respond to coronavirus because China has “total control” over the global organisation.