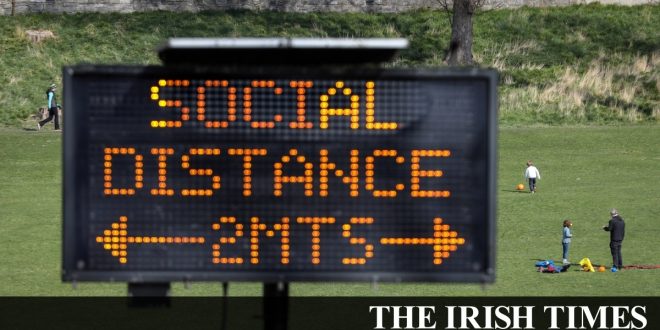 Taoiseach Leo Varadkar has said “that there is no change to the advice to maintain a physical distance of two metres,” according to his spokesman.

“The public health advice from Nphet stands,” he said.

Earlier this week the State’s chief medical officer Dr Tony Holohan said the two metre distance was something that would be kept under review, when questioned at a daily Nphet press briefing.

At a lengthy meeting of the Cabinet on Friday evening, several Ministers advocated for social distancing rules to be reduced from two to one metres between people.

World Health Organisation (WHO) coronavirus guidance around social distancing advises people to keep “a distance of 1 metre (3 feet) between yourself and anyone who is coughing or sneezing.”

Public health advice in Ireland opts for a recommendation people keep two metres from others, to avoid the spread of droplets from one person to another.

Minister for State with responsibility for disability issues Finian McGrath raised the prospect of Ireland moving to the requirement to keep one metre from others, at a Cabinet meeting on Friday.

A small number of Cabinet colleagues were supportive of the move, which would make it easier for schools, restaurants, pubs and other small businesses to re-open and adhere to public health advice.

It is understood the issue will be discussing during a general meeting on public health measures between Cabinet members and Dr Holohan next week.

There was some pushback at the Cabinet meeting over the “ultra-cautious” approach taken by the National Public Health Emergency Team (Nphet) to the easing of lockdown restrictions, one source said.

The proposal to reduce the social distancing advice was not “shot down” outright, they said.

Commenting at the briefing last Tuesday, Dr Holohan said Nphet would not “rule out” a review of the two metre rule. The guidance around social distancing would be kept under “continual review,” he said.

Dr Cillian de Gascun, director of the national virus reference laboratory, said he would have “concern” about reducing the distance “at this point.”

Speaking at the same briefing, he said the current distance was based on knowledge about how far droplets can travel from a person, and then potentially infect someone else.

However, he acknowledged moving to a one metre distance “would make life easier in certain circumstances.”