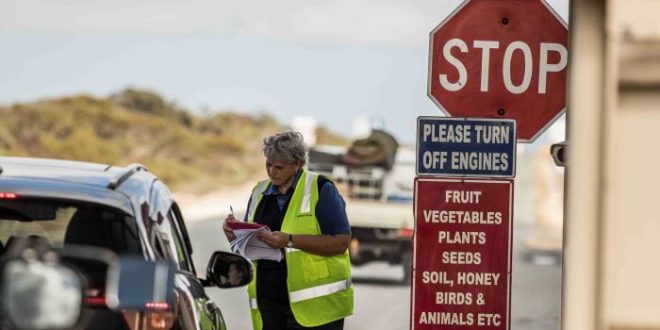 Should states ditch COVID-19 border restrictions? Even medical experts can’t agree on that one

Two of the doctors advising the Australian Government on its coronavirus response have said they cannot see the medical reasons for some states keeping their borders closed.

Yet these very states and territories — the Northern Territory, Queensland, South Australia, Tasmania and Western Australia — insist they are staying shut because of medical advice.

Why are there such different opinions?

Why are borders such a big deal in controlling COVID-19?

Australia has some of the strongest coronavirus border controls in the world, which are credited as a key reason for our success in suppressing the spread of the virus.

The Australian Government closed its international borders to non-citizens and non-residents on March 20, on the advice of its medical expert committee.

“We knew that the greatest risk to uncontrolled transmission was in imported cases,” Professor Murphy told a Senate inquiry last month.

“As an island, we were in a position of perhaps doing border measures more effectively than other countries, so the unanimous health advice of the Health Protection Principal Committee was that we should do that.”

Who decided to shut state borders?

While the AHPPC has advised the Government on issues ranging from elective surgery to when elite sport should be resumed, it has not made any recommendations around state borders.

It left this to the states, which acted quickly after Prime Minister Scott Morrison announced he was shutting Australian borders.

Tasmania was the first state to close its borders, on March 20, followed by the Northern Territory, South Australia and Western Australia on March 24 and Queensland, the day after.

The ACT, NSW and Victoria chose not to.

Deputy chief medical officer Paul Kelly said the committee had decided “not to have a decision on [state] borders”.

“As has been the case with much of the national advice, specific issues related to states are to be done at that state level,” he said earlier this week.

Why are borders such a big deal now?

New South Wales, with its tourism-dependent economy, has been calling for the opening of all state borders to help stimulate struggling local businesses.

But the closed-off states — particularly Queensland and WA — have strongly resisted, saying they will open up when their medical advisors say it is safe to do so.

Confusingly, two of the Australian Government’s top medical advisors have indicated that they do not think it is a problem, medically speaking, for state borders to be open.

“From a medical point of view, I can’t see why the borders are still closed but, as I said, that’s for the states and territories themselves to decide when that time is right for them,” Professor Kelly said.

“I think it is not clear what medical reasoning [there] is for state borders to remain closed, but that of course is a matter for state premiers,” he said.

“I think the premiers of Queensland and Western Australia have made it very clear in the media that it is going to be their decision.”

Yesterday, Professor Kelly further explained why he did not think it was particularly risky to allow interstate travel.

“With so few cases in the community — less than 600 active cases, with many people who have come from overseas and are currently in quarantine — the risk of opening borders or plane travel is very low,” he told SevenWest Media.

Why are some states refusing to open their borders?

The closed states clearly believe they have made the right public health decision, with the statistics backing them up.

The NT and SA are in the elite club of states with no confirmed cases of COVID-19, as is the ACT.

Only NSW and Victoria recorded new cases of coronavirus on Friday, with both States experiencing community transmission.

After intense media attention on the border issue this week, WA’s Chief Health Officer, Andrew Robertson, took the step of releasing a statement to explain his advice.

He argued that WA’s decision to shut interstate and regional borders, as well as enforce a quarantine for interstate arrivals, was “highly effective in reducing interstate cases and eliminating community spread”.

His Queensland counterpart, Jeannette Young, shared similar statistics with RN Breakfast on Friday, saying there had been no new cases acquired from interstate in the past 40 days.

What will it take to reopen borders?

Both Dr Robertson and Dr Young said it would not be safe to re-open borders until community transmission was eliminated in NSW and Victoria.

“It’s local transmission where you do not know where that has come from. That’s the concern,” Dr Young said.

They both said their condition for reopening is for these states to record 28 days — or two virus incubation periods of 14 days — without community transmission.

“Until community spread is eliminated in the affected jurisdictions, which will require at least a month to confirm, opening of the interstate borders is not recommended,” Dr Robertson said in his statement.

“If the community spread is controlled, relaxation of the interstate borders could be considered after the introduction and assessment of the impact of phase four [interstate border closure].”

The closed states also appeared wary of re-opening the borders too soon and then facing the prospect of reintroducing shutdowns if there was a fresh wave of infections.

Even as her state marked the significant achievement of having no active cases of coronavirus, South Australia’s Chief Public Health Officer, Nicola Spurrier, refused to use the label “coronavirus-free”.

“This is obviously a really fantastic milestone for us … [but] it’s no time to be complacent,” she said.

“We do not want a second wave. If we did have a second wave, the only way people know how to deal with that is to shut things down.”