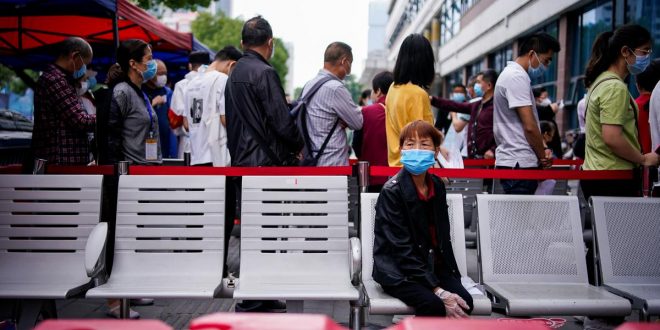 WUHAN, China (Reuters) – As Wuhan, the Chinese city where the COVID-19 pandemic began, revs up a massive testing campaign, some residents crowding the test centres expressed concern on Saturday that the very act of getting tested could expose them to the coronavirus.

A woman wearing a face mask looks on in front of others standing in a queue for nucleic acid testings in Wuhan, the Chinese city hit hardest by the coronavirus disease (COVID-19) outbreak, Hubei province, China May 16, 2020. REUTERS/Aly Song

Safety has become a hot topic on social media groups among the 11 million residents of Wuhan, people told Reuters as they converged on open-air test sites at clinics and other facilities. Many said, though, that they support the voluntary campaign.

Wuhan health authorities sprang back into action after confirming last weekend the central Chinese city’s first cluster of new infections since it was released from virtual lockdown on April 8.

The new cases – all of them people who had previously shown no symptoms of the disease – spurred Wuhan authorities to launch a citywide search for asymptomatic carriers of the virus, aiming to gauge the level of COVID-19 risk.

“Some people have expressed worry in the (social media) groups about the tests, which require people to cluster, and whether there’s any infection risk,” said one Wuhan resident who asked not to be named.

“But others rebutted those worries, saying such comments are not supportive of the government.”

The unprecedented scale of testing indicates the official level of concern, some experts say. Others say it is an extremely costly exercise and question its effectiveness.

At a testing kiosk in Jianghan district in central Wuhan, a volunteer was patrolling and spraying disinfectant at a long line of people.

Many people observed social distancing, such as queuing 1 metre apart, and there were signs to remind them. But just as many did not. In some cases, volunteer workers were not insisting that they comply.

At another open-air testing kiosk, where throat swabs were taken, yellow and black stickers on the ground kept people from converging.

But at the back of the long queue, about 40 people gathered with no guidance from officials or volunteers.

Residents said the authorities have not told them when they would get the results of their tests.

China has confirmed 82,941 cases of COVID-19 as of Friday and 4,633 deaths. The government does not include people found to be asymptomatic carriers of the virus in its tally and does not publish a cumulative number of asymptomatic cases.

Previous U.S. companies discover the dark side of a COVID-19 business boom
Next Dangers lie ahead in our descent from Covid-19 peak