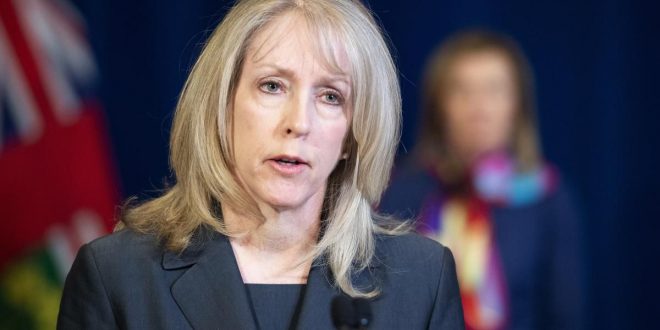 Premier Doug Ford is putting the lives of vulnerable seniors at risk by delaying a measure to slow the deadly spread of COVID-19 in nursing homes by one week, critics charge.

Despite the premier declaring that the illness is spreading like “wildfire” in long-term care, Ford’s measure to restrict staff to working in just one nursing home won’t take effect until April 22 and will be in effect for only 14 days.

“You bring the bucket a week from now to a wildfire that’s raging today? Lives are at stake here,” NDP Leader Andrea Horwath said after details of the emergency order became public Wednesday.

The time lag was not mentioned by Ford or Long-Term Care Minister Merrilee Fullerton at their news conference Wednesday, where the premier spoke with urgency about the need to “fortify the iron ring of protection” around nursing-home residents.

At least 144 people who live in Ontario nursing homes have died from COVID-19, representing about 40 per cent of the official provincial tally. The 65-bed Pinecrest home in Bobcaygeon, for example, has lost 29 residents. More than 800 of the province’s COVID-19 cases are in nursing homes, split between residents and staff. There are outbreaks in more than 100 facilities.

Other new measures in what Ford called an “all-out plan” include hospital “SWAT teams” being sent to nursing homes with severe outbreaks to boost infection control and help care for residents, along with increased testing in nursing homes to better understand how the virus is spreading in close confines.

“We’re throwing everything we got at our long-term care homes,” Ford said. “We’ll spare no expense.”

“I don’t have evidence that it contributed extensively thus far” to the spread of the infection, added Williams, who had previously recommended workers not hop from one home to another.

Opposition parties, which have refrained from strong criticism of Ford’s Progressive Conservative government in a spirit of collaboration during the pandemic, said the restriction should have been put in place sooner given the urgency of the situation.

“The bottom line is that the government has been slow to react to the 114 outbreaks and counting in Ontario, compared to B.C. and Quebec, which reacted quicker with expanded testing and emergency orders to limit staff movement,” said Green Leader Mike Schreiner.

“Starting this plan in a week rather than immediately is ineptitude that will cost lives,” he warned.

Fullerton, a former doctor, maintained the government has “acted swiftly and decisively” in recent weeks to restrict visitors to nursing homes, improve screening of staff and boost cleaning protocols.

There were no details, however, on the number of teams being sent to an unknown number of nursing homes in need of assistance. Fullerton promised that would happen within “24 to 48 hours.”

“It’s already happening in some areas where the local hospitals have rallied,” said Fullerton, who could not provide examples.

Horwath said the lack of specifics does not inspire confidence. “They are making it up on the fly,” she charged.

The Ontario Hospital Association said its member hospitals, which have not seen a surge in patients that had been feared, are pleased to provide “reinforcements” to help nursing homes overwhelmed by the COVID-19 crisis.

“Given these extraordinary circumstances, Ontario hospitals are deepening their collaboration with health system partners to prevent the unnecessary loss of life in these settings,” said association president Anthony Dale.

“As heartbreaking stories continue to emerge, time is of the essence. Our success or failure as a province in coping with this pandemic will be determined by how well we collaborate as a single, interdependent system to support those who need help the most.”

In Ottawa, Prime Minister Justin Trudeau said the dire situation in nursing homes across the country will be high on the agenda in his weekly teleconference with premiers and territorial leaders Thursday.

“We all need to do better,” Trudeau said.

The health crisis has brought conditions within long-term care homes into “stark relief,” one federal official told the Star.

“COVID has exposed a kind of shameful, tragic truth about our society, that we don’t do a very good job of looking after our elderly,” said the official, who spoke on background.

“One of the lasting legacies that ought to come out of this is how do we improve standards and services in elder care.”

Ford agreed that the pandemic has revealed “cracks in the system” that will need to be fixed.

“This is a wake-up call to the world,” he said.

Previous Her father’s delirium was a first sign of coronavirus. He’s not the only one.
Next Coronavirus Australia live updates: Nation’s alarming iso habit