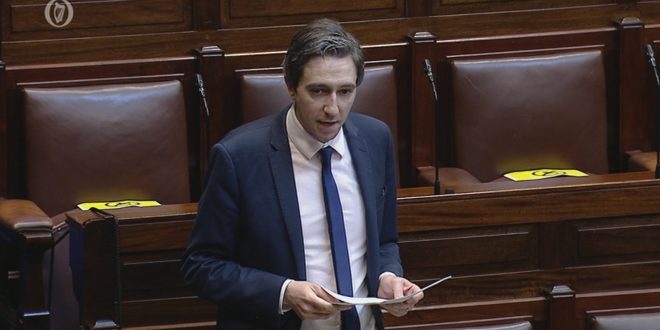 Minister for Health Simon Harris has warned that “extreme vigilance” will be required to contained the effects of Covid-19.

Speaking in the Dáil, Mr Harris said that he understands the fatigue people are feeling with the restrictions that are in place, but warned people must “guard against any sense of invincibility”.

Ahead of the planned announcement of a roadmap that will outline plans to ease restrictions, Mr Harris said we cannot act unless the disease is being suppressed.

“We have every chance of success, but we have got to get the timing right. Moving too quickly would set us up for failure, thaw would have devastating consequences,” he said.

Mr Harris also told the Dáil that the reproductive rate – or ‘R’ number – of the virus has remained stable over the past week, staying at between 0.5 and 0.8.

Health Minister Simon Harris says the Irish reproductive number for Covid-19 is 0.5 to 0.8. It is “quite an achievement by the people of this country”, he says. | Follow live updates: https://t.co/nJ98gXeFXL pic.twitter.com/cFB94lqscx

He said that modelling work on the outbreak indicates that if the virus had continued to spread as quickly as it did in its early stages, over 2,200 people could have been seriously ill in critical care units at this time.

He said if the trend had continued, over 4,800 people would have lost their lives due to the virus.

He said their modelling suggests that Irish people have saved 3,500 lives as a result of their efforts in complying with restrictions.

He said up to 40 people per day are being hospitalised, with 3 to 4 being admitted to ICU, and if we want to give the country the best chance of success against the virus, “we must continue the work”.

Live coronavirus updates as they happen

Country not out of danger yet – Taoiseach

Mr Harris also said that over 200 staff have been redeployed from the HSE to private nursing homes, which he said was up from the figure of 61 last week.

He said his Department has also reached agreement with home care providers to redeploy staff to nursing homes.

The Minister said a suggestion from Sinn Féin health spokesperson Louise O’Reilly, to deploy a consultant geriatrician to nursing homes “sounds reasonable” and he will seek expert advice on that.

He raised the case of five-year-old boy from Wicklow named Calum, who has Downs syndrome and some associated medical conditions.

He said Calum needed an MRI to treat his juvenile arthritis but the scan is scheduled for next year, two years after it was requested.

He said the boy is in pain but cannot say where the pain is as he is pre-verbal. Doctors have started treatment without the MRI to provide what care they can. He added that Calum has not had his required twice-weekly physio for six weeks.

Mr Donnelly asked why urgent care in community was not happening now.

Mr Harris said the authorities had been preparing for the pandemic to take a certain course of action but that an “awful surge” had not been reached.

He said however the disease would be around for some time. He also said they now needed to act to provide for non-Covid care alongside Covid-19 care. He said some of this was starting already.