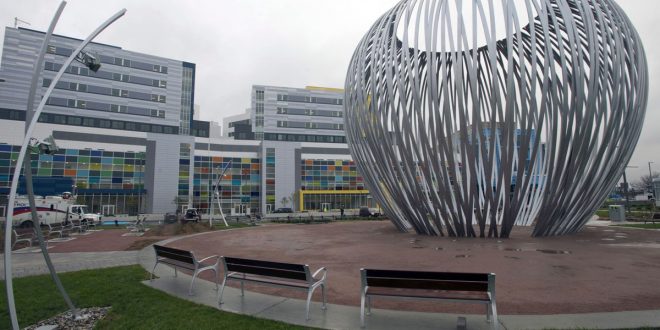 The Research Institute of the McGill University Health Centre says it will soon conduct the first Canadian test of a robot that uses ultraviolet light to disinfect.

The Montreal institute moved to order the robot just as the COVID-19 pandemic was emerging in China and Europe to see if the technology could be useful to Canada. A first robot arrived Monday for testing purposes.

The robot will also be tested in other Quebec locations – notably the Centre hospitalier de l’Universite de Montreal and long-term care homes – before a decision is made on purchasing the $120,000 device.

“We are going to test its mobility, if it is able to go to our rooms, in all corners, if UV light touches all parts of the room, and in addition if the robot is able to enter the bathrooms (in private rooms) and completely disinfect them,” said Dr. Bruce Mazer, interim executive director and acting chief scientific officer of the research institute.

The robot can also be used to disinfect an operating room. As part of the test, its effectiveness will also be tested on various objects, such as sheets, stretchers and even N95 masks.

While ultraviolet C rays are able to kill pathogens on surfaces and in the air, they can be dangerous to humans.

“The problem with UV light is that it is very effective in killing bacteria and viruses, but if you have too much UV, it can burn the skin and it can cause eye problems,” Mazer said. “But with this type of UV, if you close the door, even if there is a window, that doesn’t happen, so it is safe.”

The robot, built by the Danish company UVD Robots, is approximately 1.7 metres high and weighs 140 kilograms. It travels at just over 5 km/h and its battery can be fully recharged in six hours. The UV module lasts about two hours, enough to clean a dozen rooms, according to the manufacturer.

Mazer noted that manual room-cleaning takes about an hour, while the robot could do that job in about 10 minutes. A human would be required to do other tasks like changing sheets, but ultimately a room could be ready for the next patient twice as fast.

“If we have a way of doing things with technology that is fast and efficient, we can save money, we can have rooms faster for other patients and we can avoid risks for our workers,” Mazer said.

The robot does need guidance for the initial cleaning, but can operate on its own after that.

“It’s an automated robot controlled by GPS,” Mazer said. “When the robot goes to a room once, it will put it to memory and it can make up the same room the same way, whenever needed.”

The robot is also able to spot obstacles and adjust its trajectory as necessary.

Mazer said the robot could be valuable outside the hospital.

“It could be useful, for example, for planes or subways,” he said. “It could be incredible for a metro (subway) car – in fifteen minutes we could clean a whole train.”

Mazer explained the institute deals with many different illnesses – tuberculosis, HIV and other very resistant microbes – so technology for cleaning hospitals working with patients infected with acute illnesses and a high risk of infection is key.

The Canadian Patient Safety Institute says about 8,000 Canadians die from hospital-acquired infections each year and another 220,000 are infected, which can lead to extended hospital stays or readmissions.

The Danish robot is already being used in China, Asia and Europe, and Mazer is optimistic about its potential. “It will save lives, it will reduce waiting lists, it will reduce (hospital-acquired) infections,” he said. “It can be very useful.”