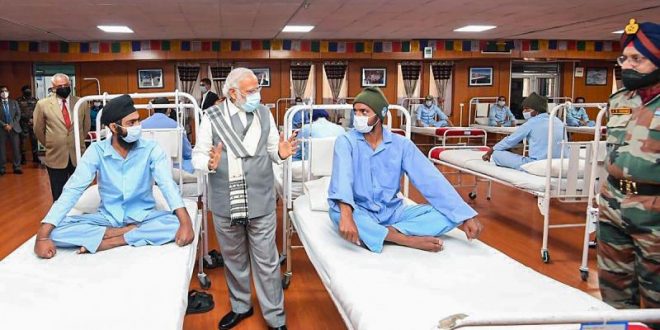 New Delhi: An important part of Prime Minister Narendra Modi’s itinerary during his day-long trip to Ladakh on Friday was his visit to Indian Army soldiers hospitalised in Leh after the June 15 clash with Chinese troops in the Galwan valley on June 15.

As with all of Modi’s engagements, his visit with convalescing soldiers was widely photographed. A video of the prime minister giving a short pep talk to the patients was also released on social media.

Since the photo and video showed the injured soldiers sitting on beds arranged in rows inside what appeared to be a large conference room rather a hospital ward, this immediately triggered speculation about the event being stage-managed to provide Modi with yet another event for the cameras.

The fact that the soldiers were all sitting upright in an identical pose on beds that looked unslept on only added to the suspicion that this was a ‘Potemkin’ ward, assembled for the occasion with patients who had no visible bandages or injuries, a point made on Twitter by Raju Narisetti, the former editor of the Wall Street Journal Europe and Mint:

This photo opp is fascinating. Not one Indian soldier seems to have external injuries needing any bandages…they are all able to sit straight up (no internal injuries?), the pristine hospital ward with beds that look un-slept on…zero medical equipment. What is going on here? https://t.co/QMANMLBKWz

The opposition Congress also leapt into the fray with one of its spokespersons, Abhishek Dutta, tweeting that this did not look like a hospital at all: “Instead of doctors, there are photographers. There are no medicines next to the bed, water bottle”. Another Congress leader called the whole exercise a “photo op”.

On July 4, the Indian Army issued a clarification stating that the room Modi visited was indeed part of the military hospital but one that had been outfitted to meet the shortage of space generated by the need to convert the main areas of the hospital into COVID isolation centres: “The COVID-19 protocol had necessitated some wards of the General Hospital to be converted into isolation facilities. Hence, this hall which otherwise was normally used as a Training Audio Video Hall was converted into a ward ever since the hospital was also designated as COVID treatment hospital.”

The Wire also spoke to Indian Army officials to get their response to the questions circulating on social media and this is what they said.

Is this a hospital ward or a conference room?

The room is indeed a conference room at the Military Hospital in Leh but it was converted to a makeshift ward in the aftermath of the coronavirus outbreak for the treatment of non-critical non-COVID patients. They pointed to video and photos of the visit of Army chief General M.M. Naravane to the same conference room/ward on June 23 to underline the fact that the room was not set up just for Modi’s visit. 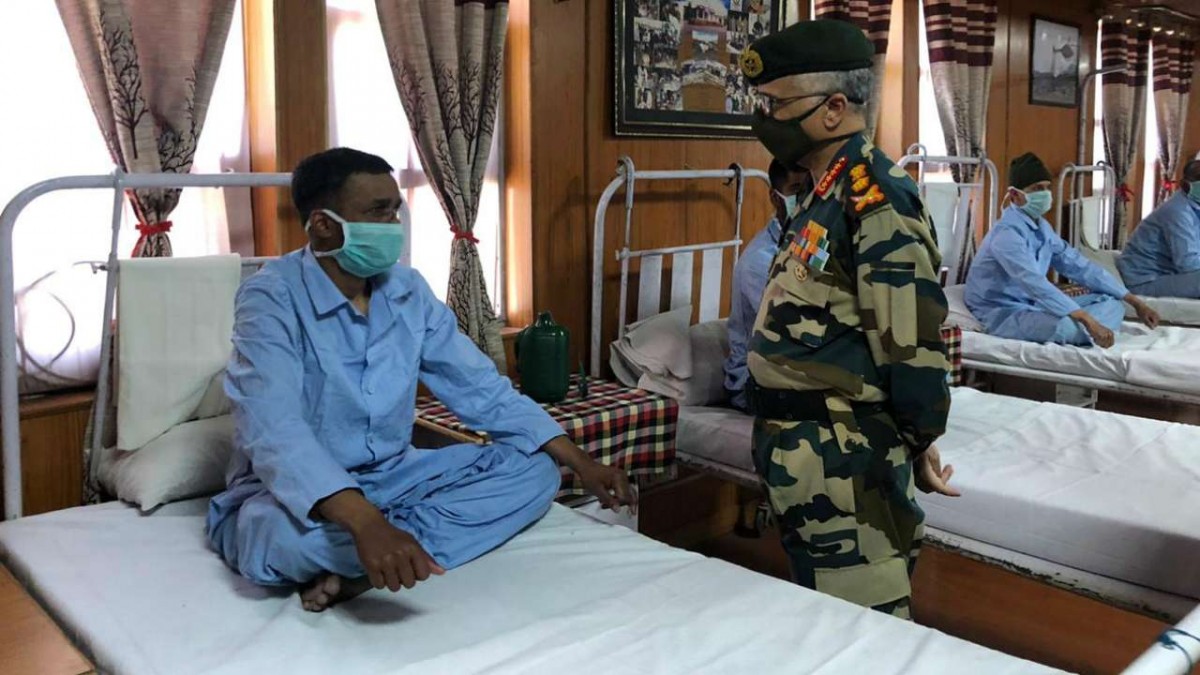 If the soldiers are still receiving treatment in hospital, where are the nursing stations, drips, etc? Why don’t any of them have any apparent external injuries requiring bandages etc?

Army officials say these are soldiers who received comparatively light injuries and are convalescing. “They are probably injured in different places like leg or arm or chest but are clothed so nothing can be seen”. Anyone who had received more serious injuries would be receiving specialised treatment elsewhere in the hospital, they said. Asked if the army could make public the details of the injuries of those still being treated and their likely date of discharge – since they have now been under treatment for nearly three weeks, which is not the amount of time minor injuries take to heal – the officials said they would put in a request for this to be done.

Soon after the incident, a report in India Today quoted army officials as saying on June 19 that of the 76 soldiers injured at Galwan, “18 soldiers are being treated for injuries at the Army hospital in Leh and will be discharged in about 15 days. The remaining 58 soldiers are undergoing treatment at various hospitals and will be able to return for duty within a week.”

Fifteen days would make them ready for discharge by July 4, which may explain the absence of bandages, etc. since Modi’s visit was on July 3.

Some of  the photos from Modi’s visit seem to indicate there are more than 18 patients in the room. However, this could be because other soldiers/patients unrelated to the Galwan incident are convalescing here. 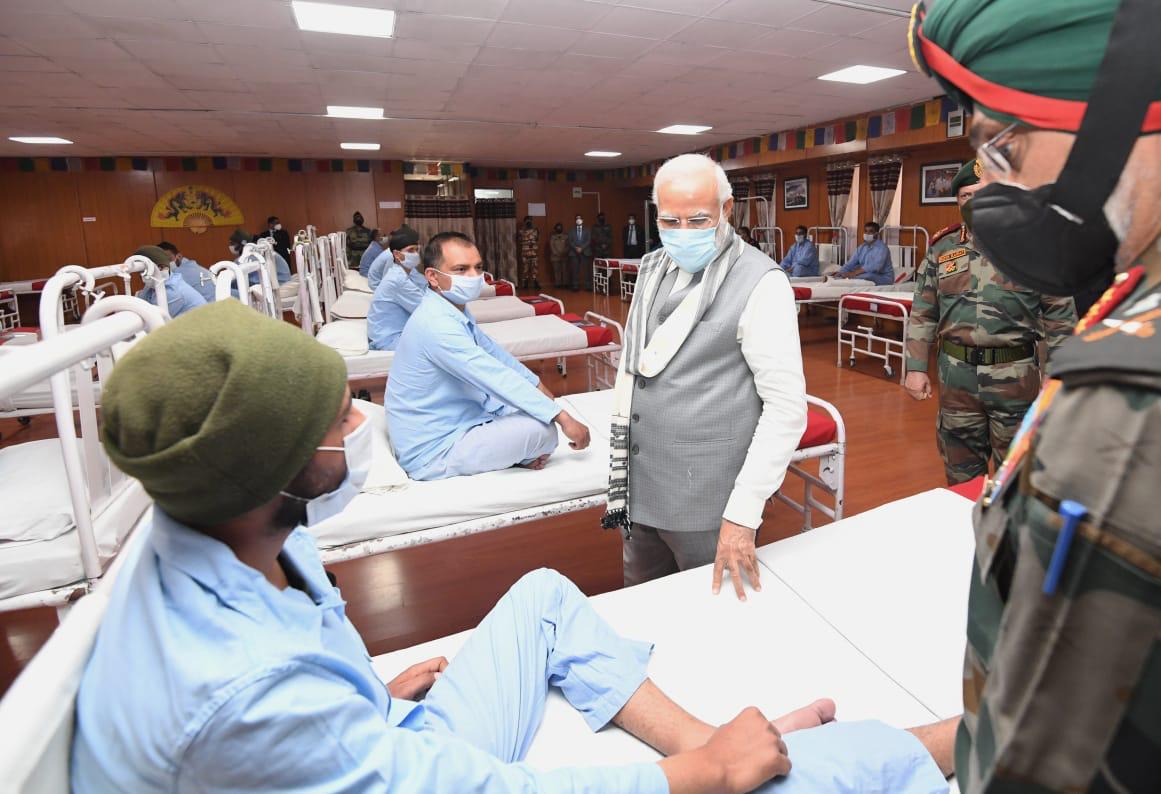 Prime Minister at the military hospital in Leh. Photo: PTI

Should injured soldiers have been made to sit in a rigid posture for the duration of Modi’s visit and remarks?

The fact that all the patients have adopted the same sitting posture suggests they have been instructed to sit like that and some critics have pointed to photographs of Manmohan Singh visiting injured soldiers where the latter are lying down. In one meme circulating on Twitter, the difference between a Modi visit and a Manmohan Singh visit is depicted thus: 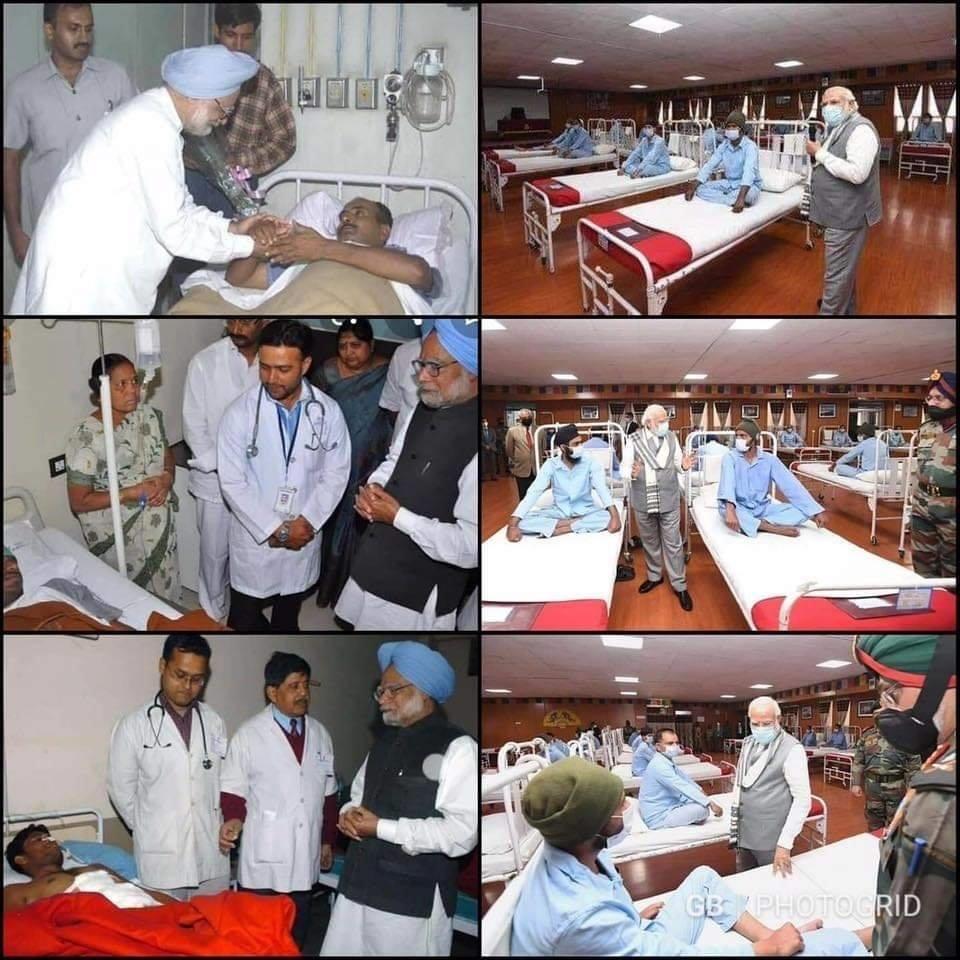 However, it is equally possible to find photographs of Manmohan Singh visiting an injured soldier where the latter has adopted the same upright seated posture. Here is an example from Srinagar in 2013: 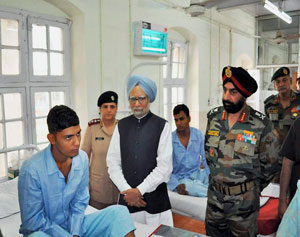 Prime Minister Manmohan Singh visiting an injured soldier at base hospital at Badami Bagh in Srinagar on Tuesday, a day after militants attacked an army convoy. Photo: PTI (June 25, 2013)

Veterans say a hospitalised soldier would rather sit up if he is able to while being visited by his commanding officers or a VVIP.

Note: The story was updated to add details of the army’s description of the injured on June 19, 2020